While I was in the Greek Islands in October, I realized that people are missing out by not visiting Greece in October. Due to the high-season ending in August when many Europeans go on holiday, many people come to Greece in September. September is lovely, but the high-season seems to be lasting longer and longer meaning to really escape the tourists you need to visit the Greek Islands in October.

The main question I am asked is, “What is the weather like in Greece in October?” There isn’t a definitive answer as the weather does change from year to year in Greece. In 2018, September was cool and windy. October, on the other hand, was sunny and beautiful. The average temperature ranges from a high of 72 to a low of 63, but I am sure that it was 80 on some days in October. With the humidity, it can feel even warmer. It does rain in October but still not very often and it never lasted very long.

The temperature wasn’t hot by any means, but still pleasant on some days to wear shorts. Almost every day in October, people were at the beach. I was at the beach on October 30 for my birthday. I didn’t swim but did have on shorts and flip-flops. If you are on the beach for any length of time, you will get hot. Some days were windy but very few. Some years, October will be cold, so be sure to check.

What to Pack for Greece in October

Since the weather can be a bit variable, I recommend bringing some shorts for the daytime and pants for the evenings. As for shirts, you will want long sleeves for the evening. If you are cold-sensitive, then a jacket or sweater is a must. I also recommend a scarf for the evening. On windy days, you will want the jacket and the scarf even in the daytime. And don’t worry about how you look, everyone will be wearing something different. Greeks will probably be wearing jackets and jeans, and the tourists will be wearing shorts and sundresses! It is all in what we are used to.

If you are not so sensitive to the cold, you might even want to bring your swimsuit! Many people were swimming in October and not in wetsuits either. You may want to bring clothes to change into after swimming in case its windy. Bring or purchase a towel as many hotels in Greece do not allow you to take their towels to the beach.

Obviously, the beaches will not be closed at any time. However, some of the beachfront restaurants will start to close in early October. This means there might be fewer sunloungers and umbrellas to rent. However, it usually means there are fewer people on the beach.

Many historic sites will still be open, but their hours might be limited. Even in the high season, Greeks tend to close their shops in the afternoon. This usually happens between 2-5. On the islands, this might mean that museums are closed in the afternoon and will reopen in the evening. Some Old Town or Chora shops may be closed for the season but some will open limited hours and usually post a sign if they are permanently closed for the low season.

As a photographer, I enjoy the afternoon closings as it means I can capture streets and sites with few or no people in my shots. This is especially true on more crowded islands, such as Santorini.

Depending on which islands you are visiting, some hotels close in October and will not reopen till April or May of the following year. This is especially true of smaller islands. Booking sites will have those months marked off so you should be able to tell. If you aren’t sure, I recommend emailing the hotels to check.

However, this means rates are lower, and you may even get an upgrade on arrival. Services usually remain the same, and you get a nice quiet hotel to relax in. If you know you want to be in Greece in October, book sooner rather than later as some hotels will stay open longer if they know they have bookings for the off-season. This ensures they have the staff to run the hotel, otherwise, they will not extend their opening dates since many staff are seasonal.

This was the only issue I found to be difficult at the end of October. Restaurants tend to start closing in late September and throughout October. Many restaurants are open seven days a week during the high season, and by the time October comes around, the staff is exhausted. On Naxos, only some restaurants were open until the end of October. However, some will open fewer days in the off-season or will just be open for dinner. You may want to consider booking a hotel with a kitchenette.

Ferries operate year-round to most islands now, but the ferry schedule is not as frequent during the summer months. As always, I recommend that you do not book your flights and ferries on the same day. Greece is known to have strikes, even in the tourist season. The weather in October and all the winter can prevent ferries from departing, especially the high-speed ferries. The high-speed ferry service starts to reduce its service offerings in October. Some larger islands have airports, so another option is to fly. If you plan on island hopping, allow for some flexibility in your schedule if taking the ferry as some hotels will not refund your money if ferries are canceled due to weather. Travel insurance may cover ferry cancellations making it a must purchase for an island-hopping adventure in Greece.

As you can see, visiting a Greek island in October is a great idea, and while it may be quieter, it can still be a warm destination. I personally loved being in Greece in October as I got to see how the locals live after the tourists leave. I also ran into my friends more frequently than I would during the high season. 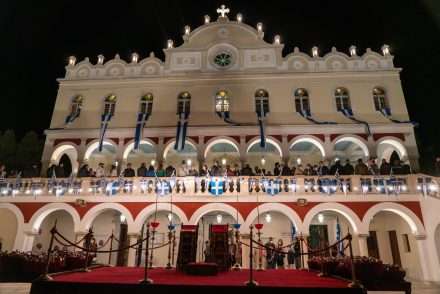