May 13, 2019
This post may contain affiliate links. If you click on the link and make a purchase, I may earn a commission at no additional cost to you. 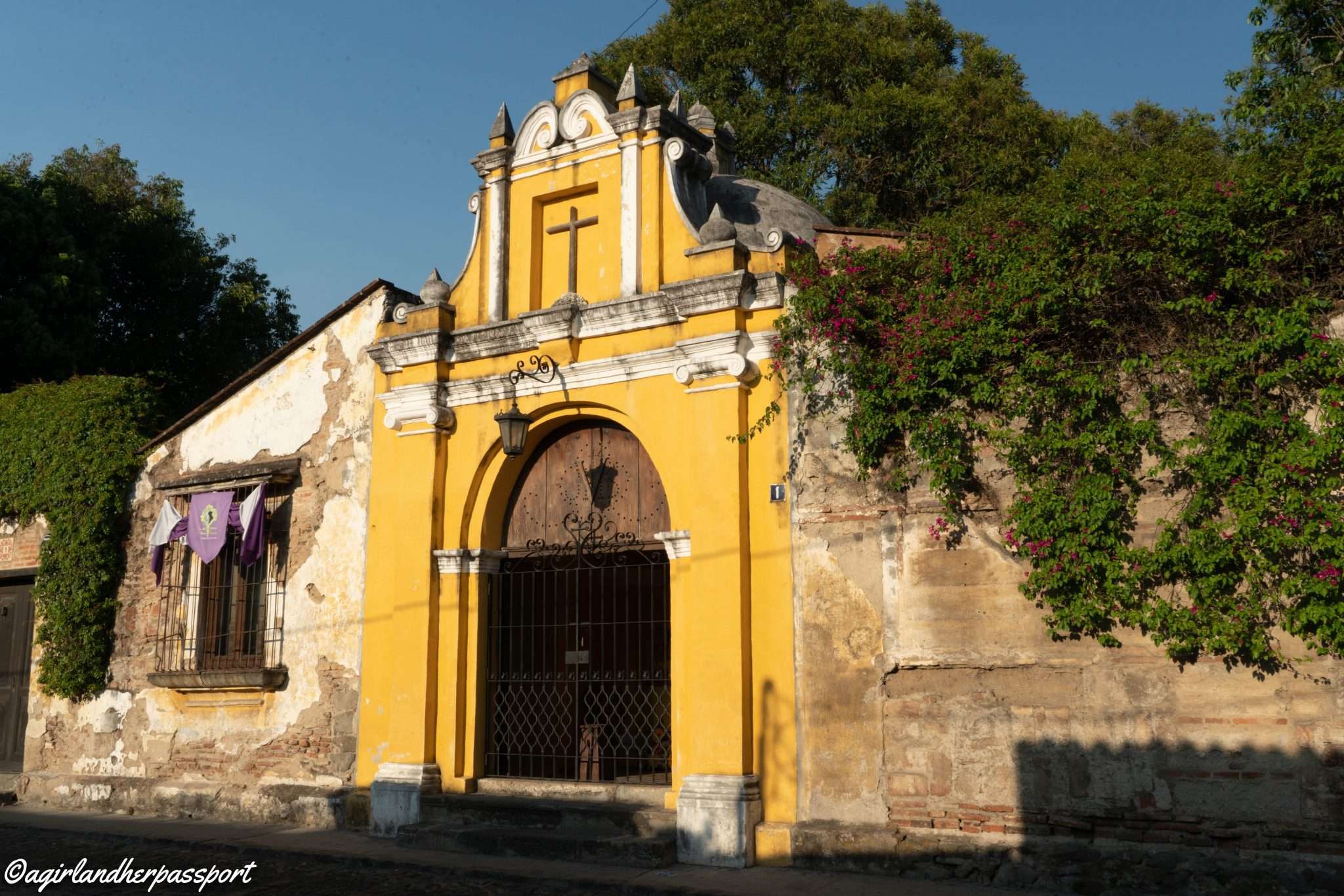 Someone told me while I was in Antigua that there are 37 churches in Antigua Guatemala! Now I didn’t go around counting, and I didn’t visit each one. What else they don’t tell you but is pretty easy to figure out is that many or most of these churches are not operating churches and are ruins from the earthquakes that happened in the 1700s. The many earthquakes forced the government to move the capital from Antigua to what is now Guatemala City. The result is that the entire town of Antigua Guatemala is a UNESCO World Heritage site. 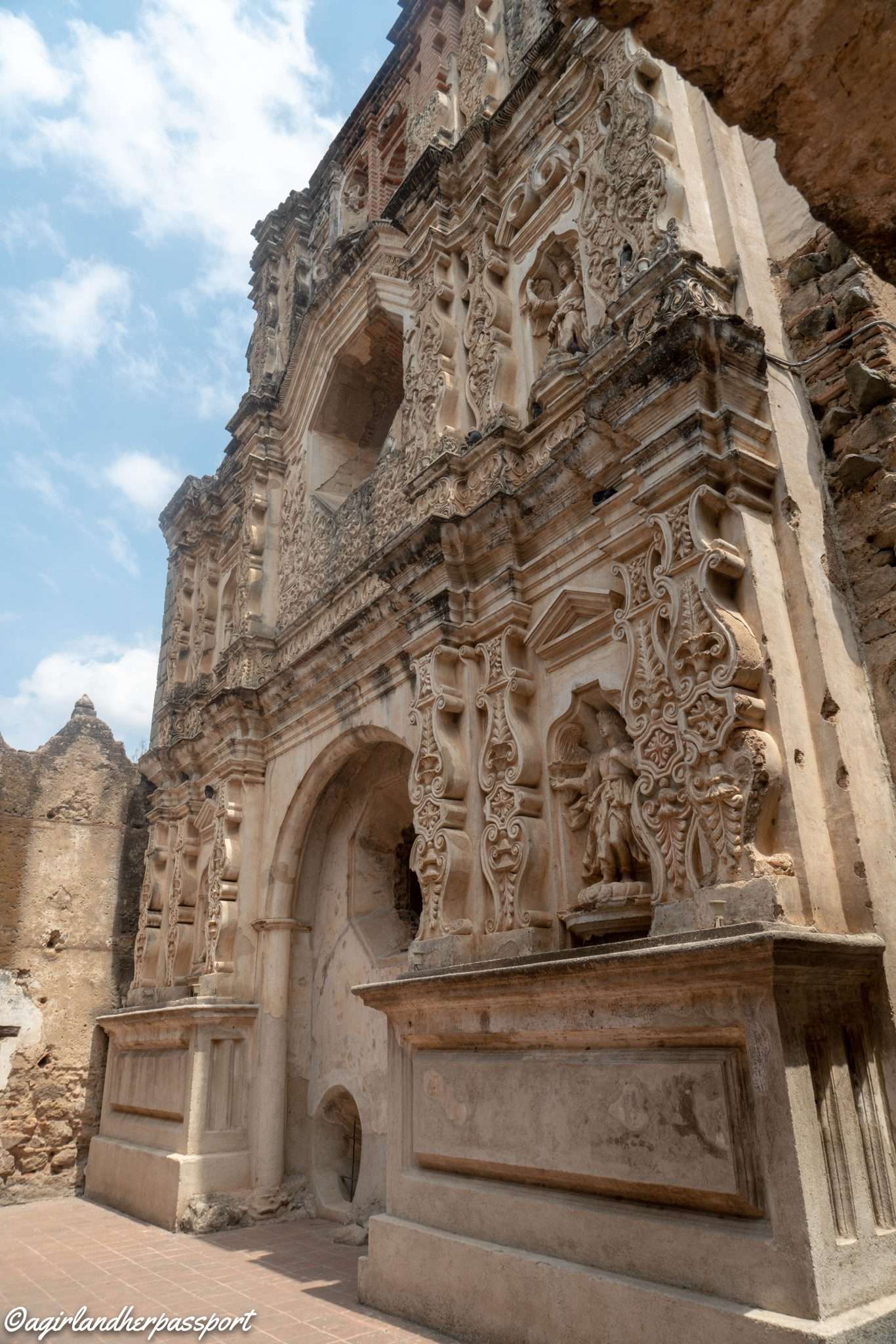 This was my favorite ruin of all the churches in Antigua. It is so beautiful inside, and I think it is one of the most underrated things to do in Antigua Guatemala. The ruins have been restored without losing their ruin like appearance, but best of all they have created a beautiful garden inside. The flowers are amazing, and there are two working fountains inside. It was also clear that they were doing some work to make portions of it more stable and to make more areas accessible to the public. Of the few other people inside, most were relaxing enjoying the weather. 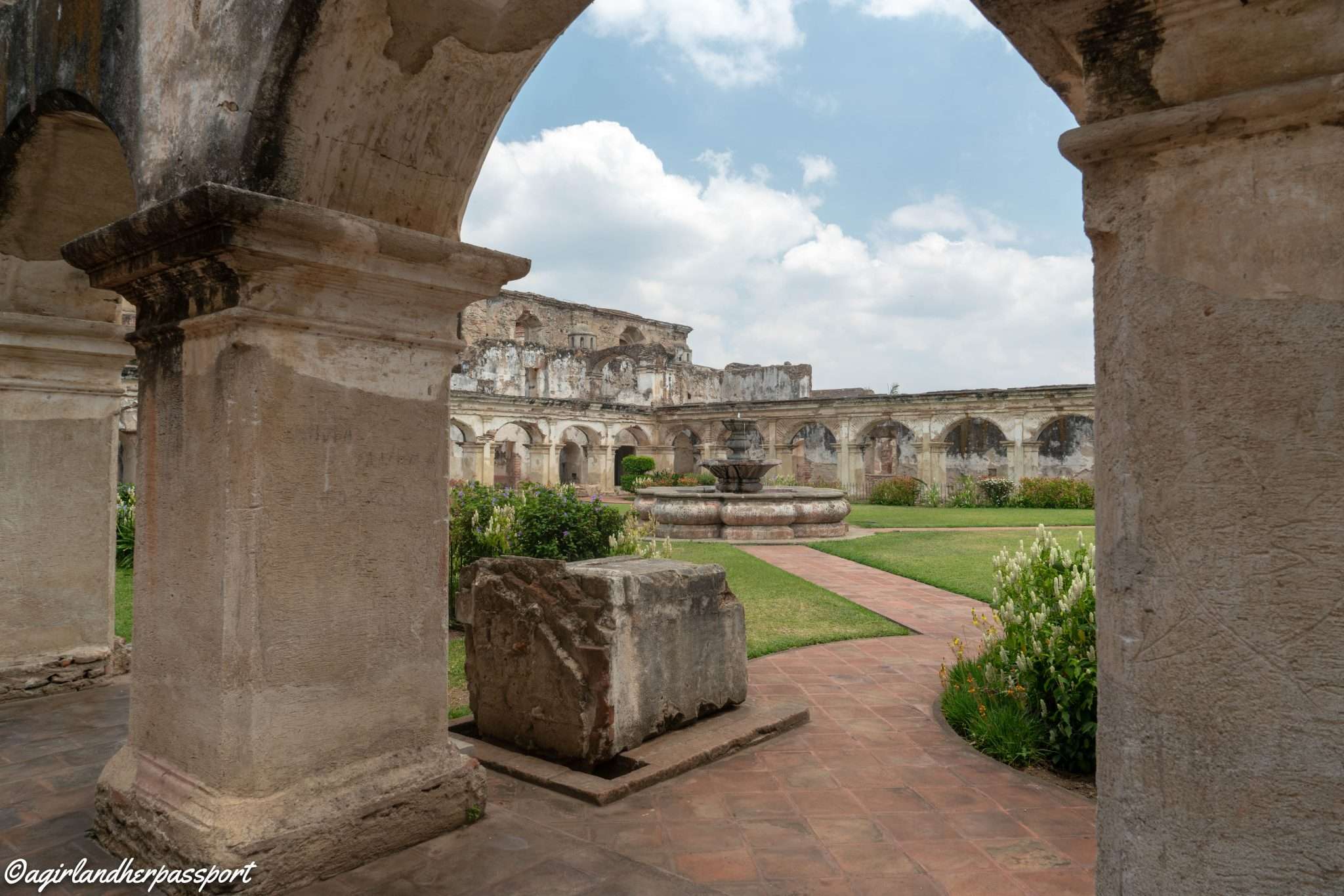 The convent was started when nuns came from Mexico to Antigua in 1699, but it took about 16 years to build the convent and church. Not long after it was destroyed by an earthquake in 1717. Over many years the convent and church were rebuilt and reopened around 1734. It was all destroyed again in 1773 along with many of the other buildings in Antigua. 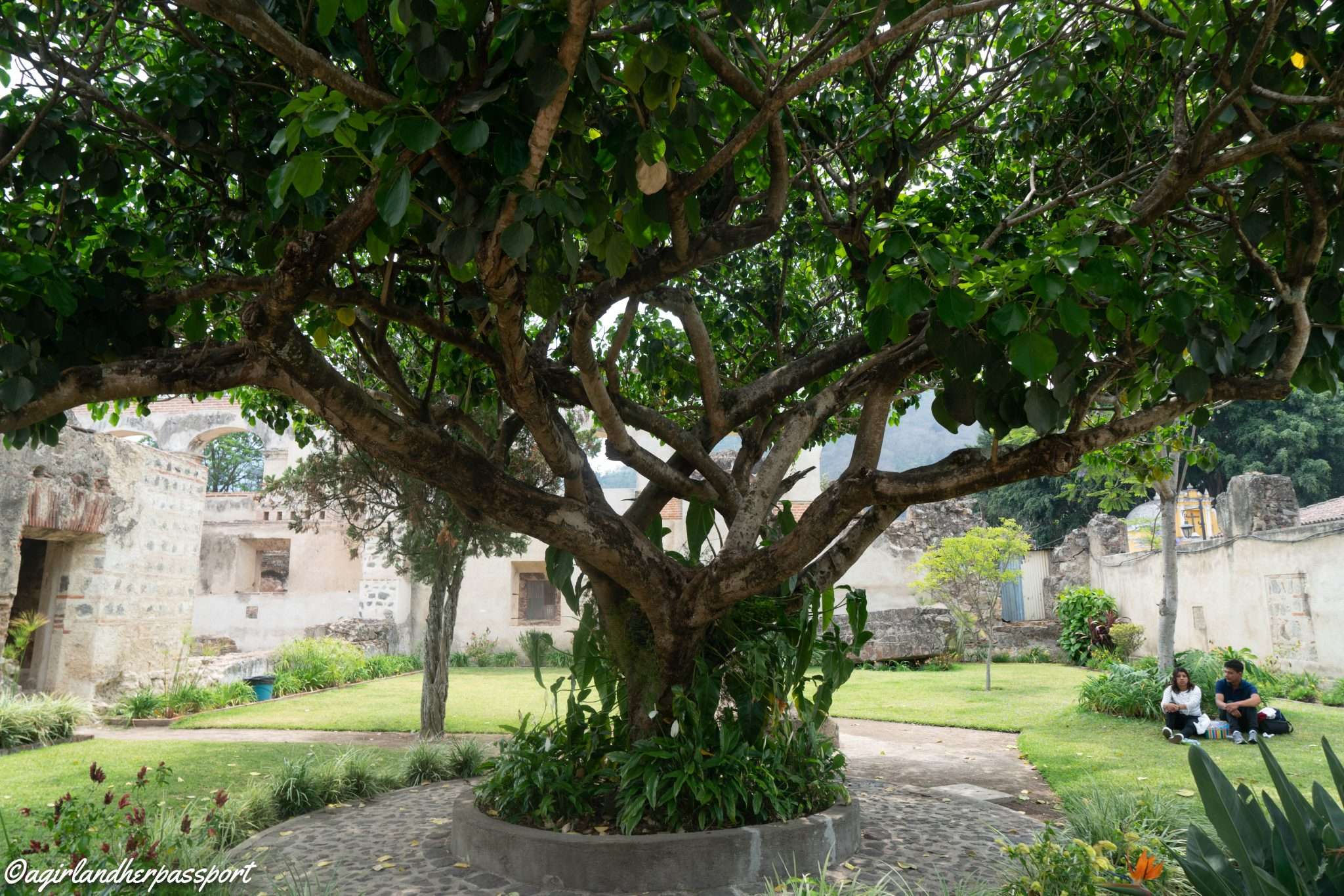 The entrance fee is 40 Quetzals, which is about $5.20. The hours are Monday through Saturday from 9 to 5. Be aware they may be closed for special events.

This church is one of the larger churches in Antigua Guatemala. It has a wonderful Baroque exterior that is painted yellow. This church was not damaged in the earthquakes in the 1700s, but when the capital was moved from Antigua Guatemala to Guatemala City, it was forced to close. Many of the statues inside the church were relocated. During Semana Santa, La Merced puts on many processions and make some of the largest carpets in the city. Another great feature is the street market that happens on the grounds of the church almost daily. Although on the weekends, the number of vendors and people swell and you can hardly get in to buy food. It makes for great people watching. If you want to enter, make sure your shoulders and knees are covered. The church is not always open so go inside when you see the main doors are opened. 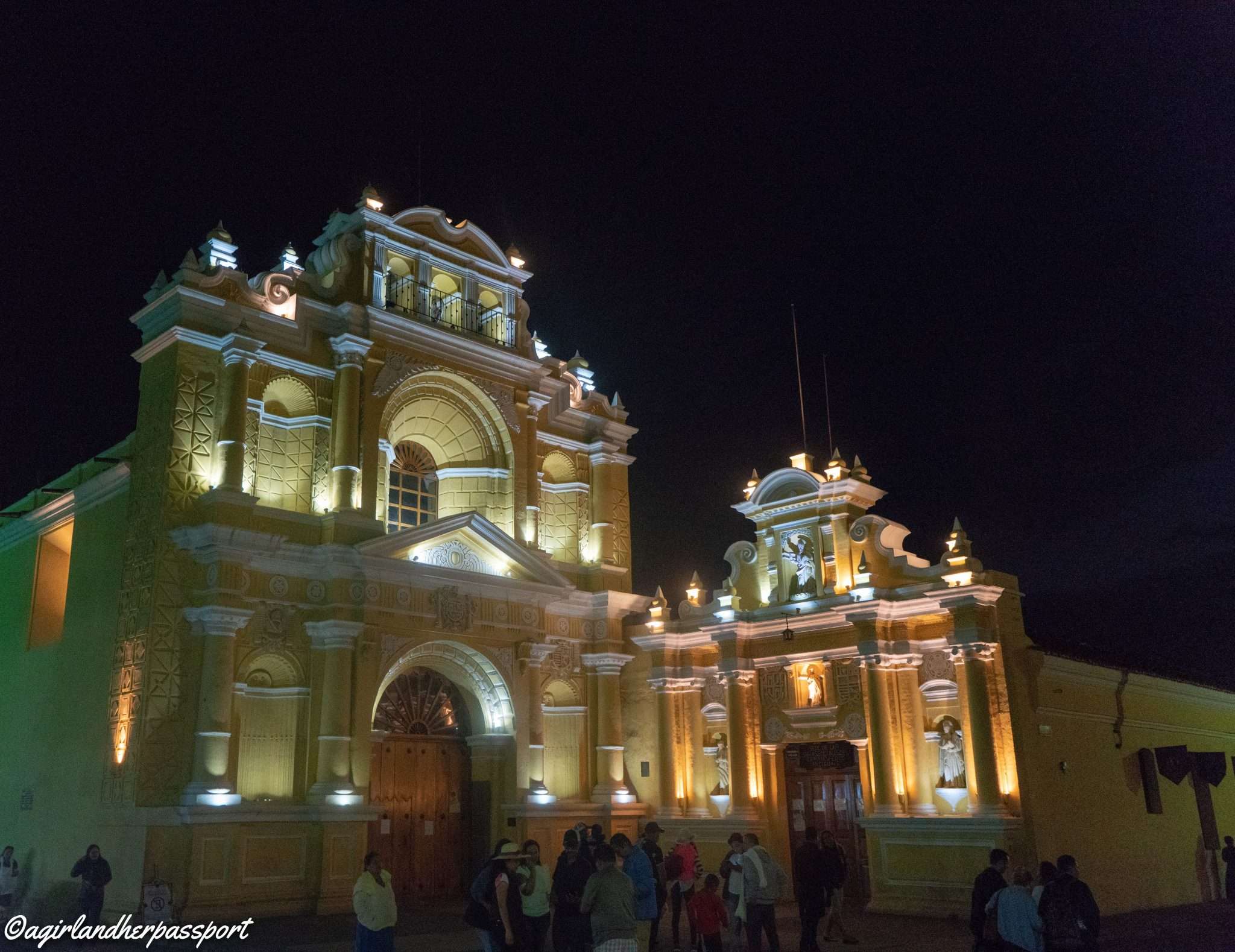 San Pedro is another beautiful yellow church. I recommend going to see it at night as it is all lit up beautifully. Not only is San Pedro a church, but it is also a hospital for the poor. It also serves as a home for the elderly and mentally ill. The entrance for the church and the hospital are right next to each other. San Pedro is also huge and takes up a whole city block. San Pedro was not destroyed during the earthquakes. Some of the other entrances to the hospital portion are gated allowing you to see inside to the beautiful courtyard. One night I was walking by San Pedro, and there was a fantastic service going on with music and kids dancing outside. San Pedro also participates in many of the Semana Santa celebrations, especially on Easter Sunday. 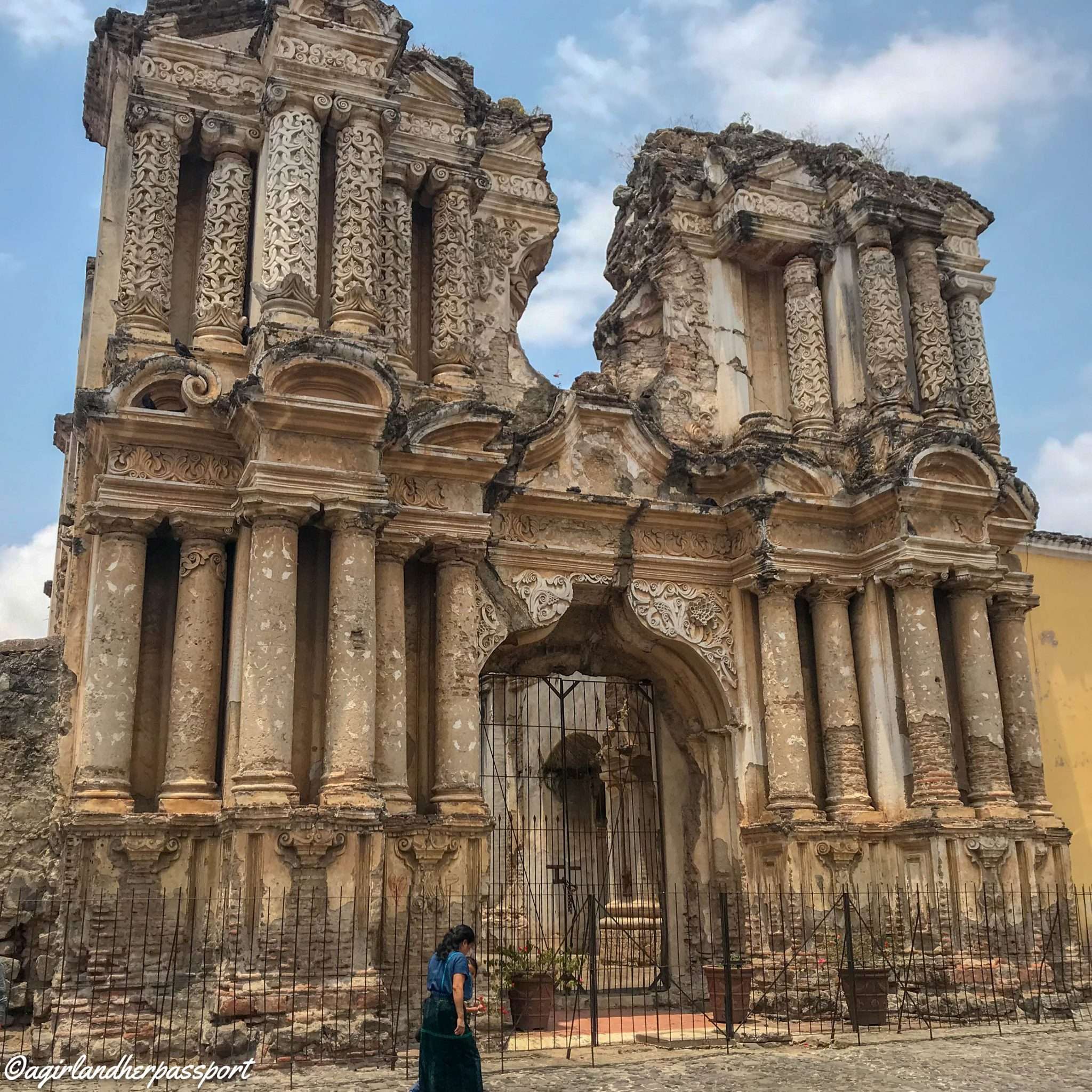 El Carmen was one of the first church ruins I came across during my time in Antigua. You cannot go inside the church, but the facade is made up of beautifully ornate carved columns. The church was rebuilt many times during the many earthquakes. The first church was built in 1651 and destroyed in the same year. Next, the church was rebuilt in 1686 and heavily damaged in the earthquake of 1717. It was never rebuilt after this. You can see photos from the early 20th century, and the church looks better than it does today, but the domes fell during the 1976 earthquake. Outside the church and in the building next door is an excellent handicraft market. 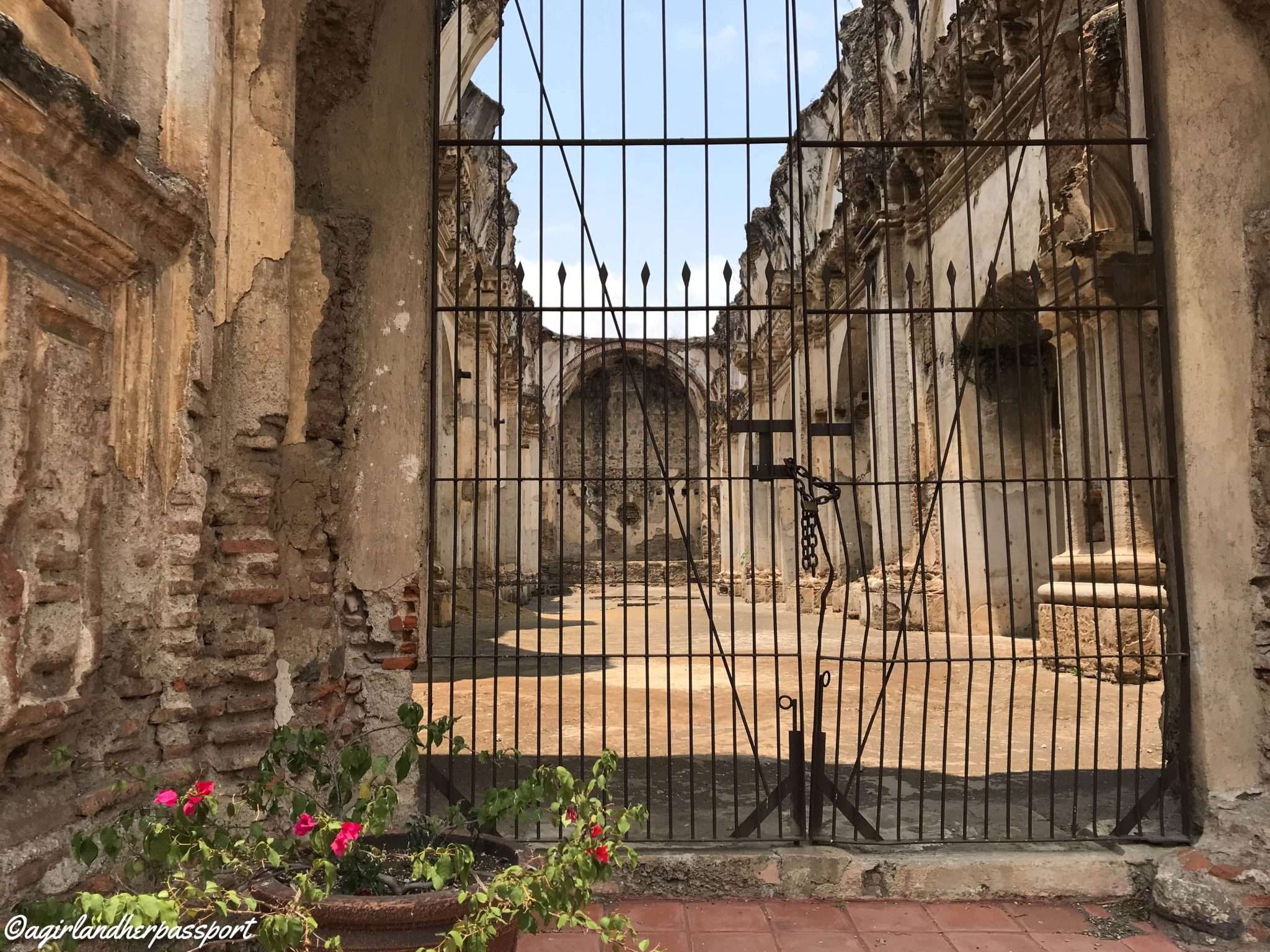 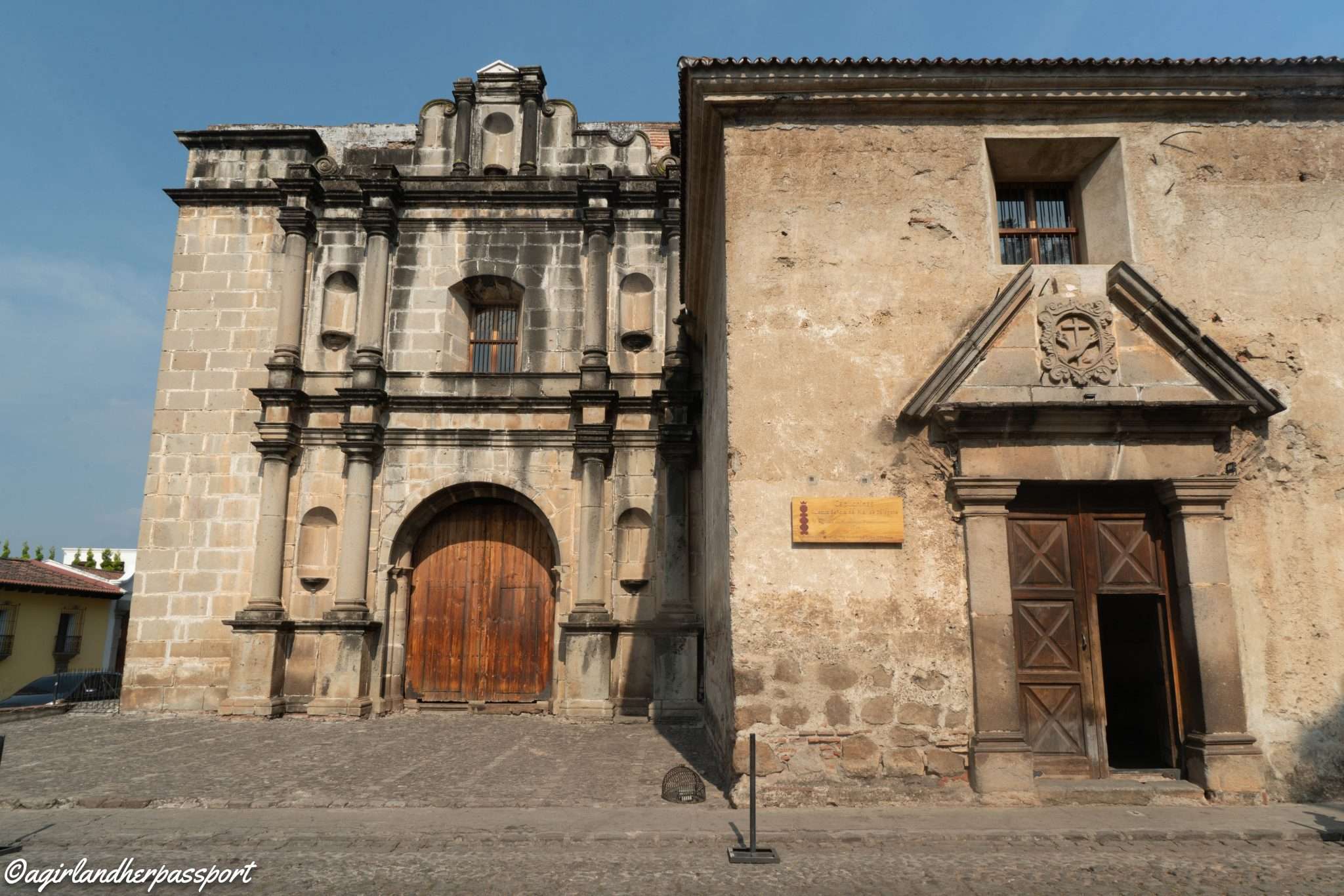 Construction on this convent began in 1731 and was blessed in 1736. It was the last convent to be built in Antigua Guatemala. Much like the others, it was heavily damaged by the 1773 earthquake and subsequently abandoned. You can see that much of the convent has been restored since the earthquake. This convent was busy with people working in offices and about the building, but it was unclear what the offices’ function was. On the second floor was a small museum covering the history of the convent and the history of Antigua. Much of the convent isn’t open to the public, but it was nice to see a space being used for something and being well cared for. 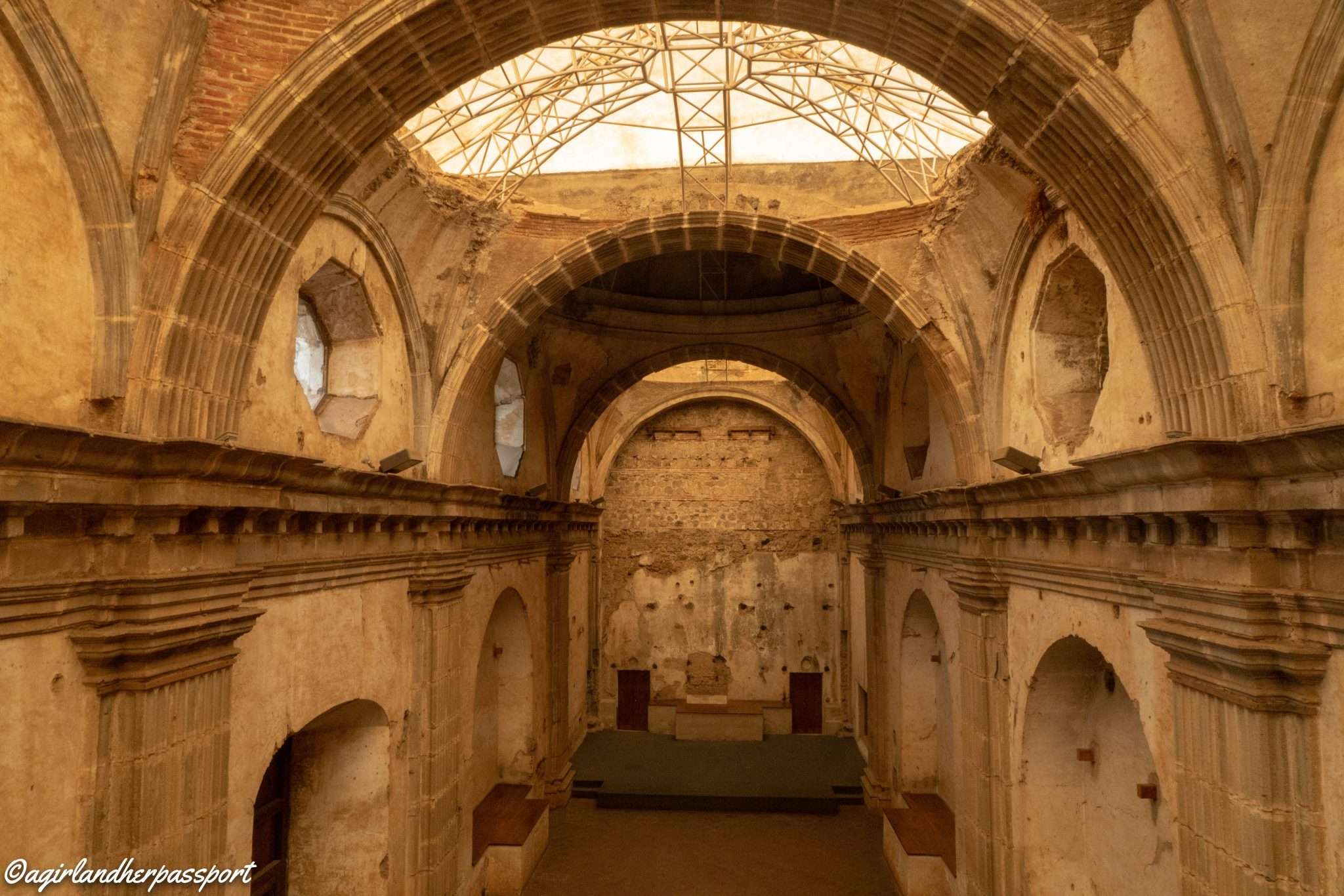 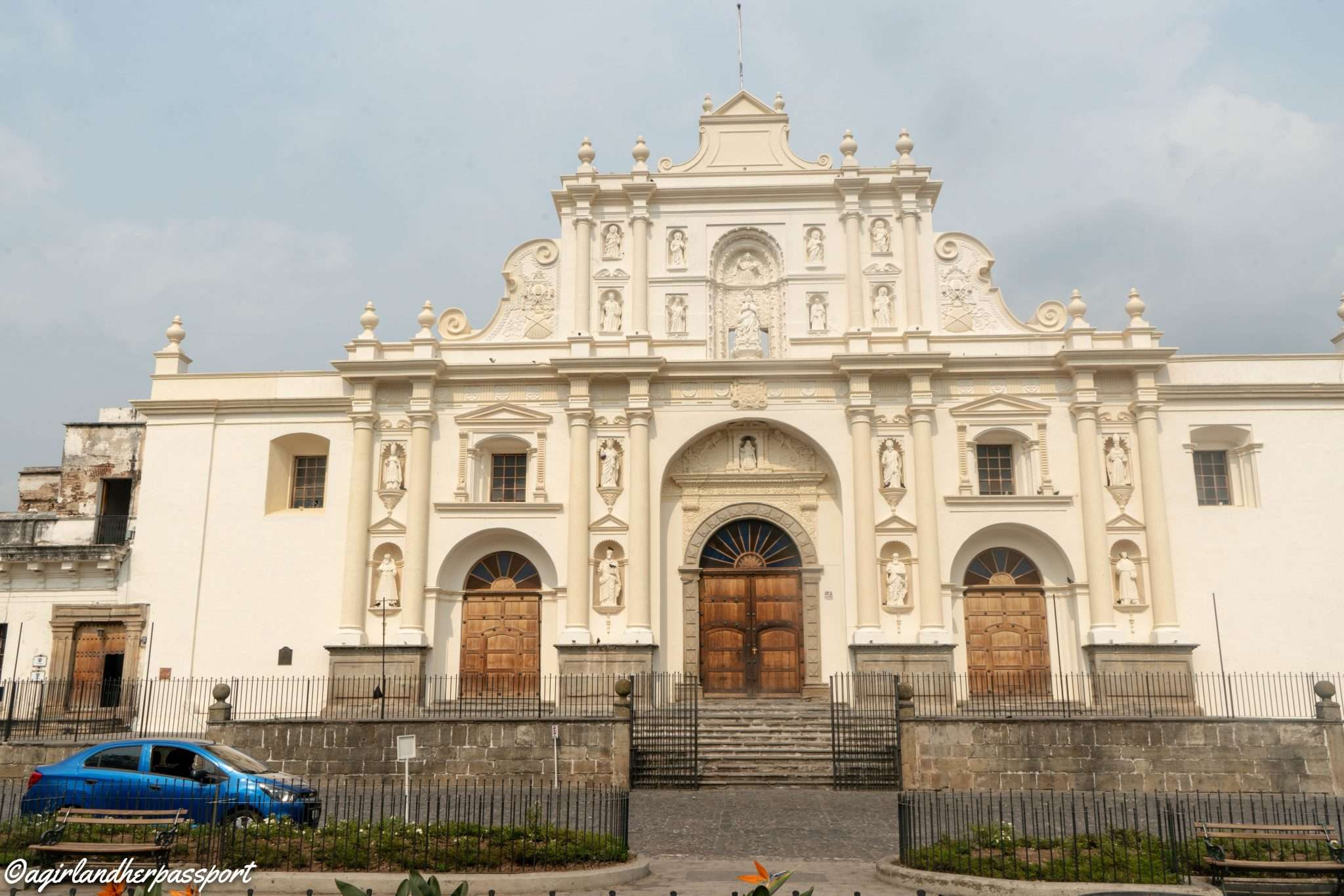 You can’t miss this the main church in Antigua as it is located right in the main square. While this is an active church, there are ruins behind the main building. Here you can see how large the cathedral used to be. The original church was 1561 and then demolished in 1669. I couldn’t find any information on why the original church was demolished. By 1680 another cathedral had been built in its place.  As you can imagine, this new building did not make it through the 1773 earthquake, and only the facade remained intact. In the 180os, the building was again a church with a parish, but the local government lacked enough funds to restore the entire church. So behind the main facade around the corner, you can enter the ruins and see how large the cathedral once was. You can also go into the lower levels here. There is a rumor around town that all the churches in Antigua are connected by tunnels, but no evidence has ever been found to support it. The entrance fee here is also 40 Queztals. 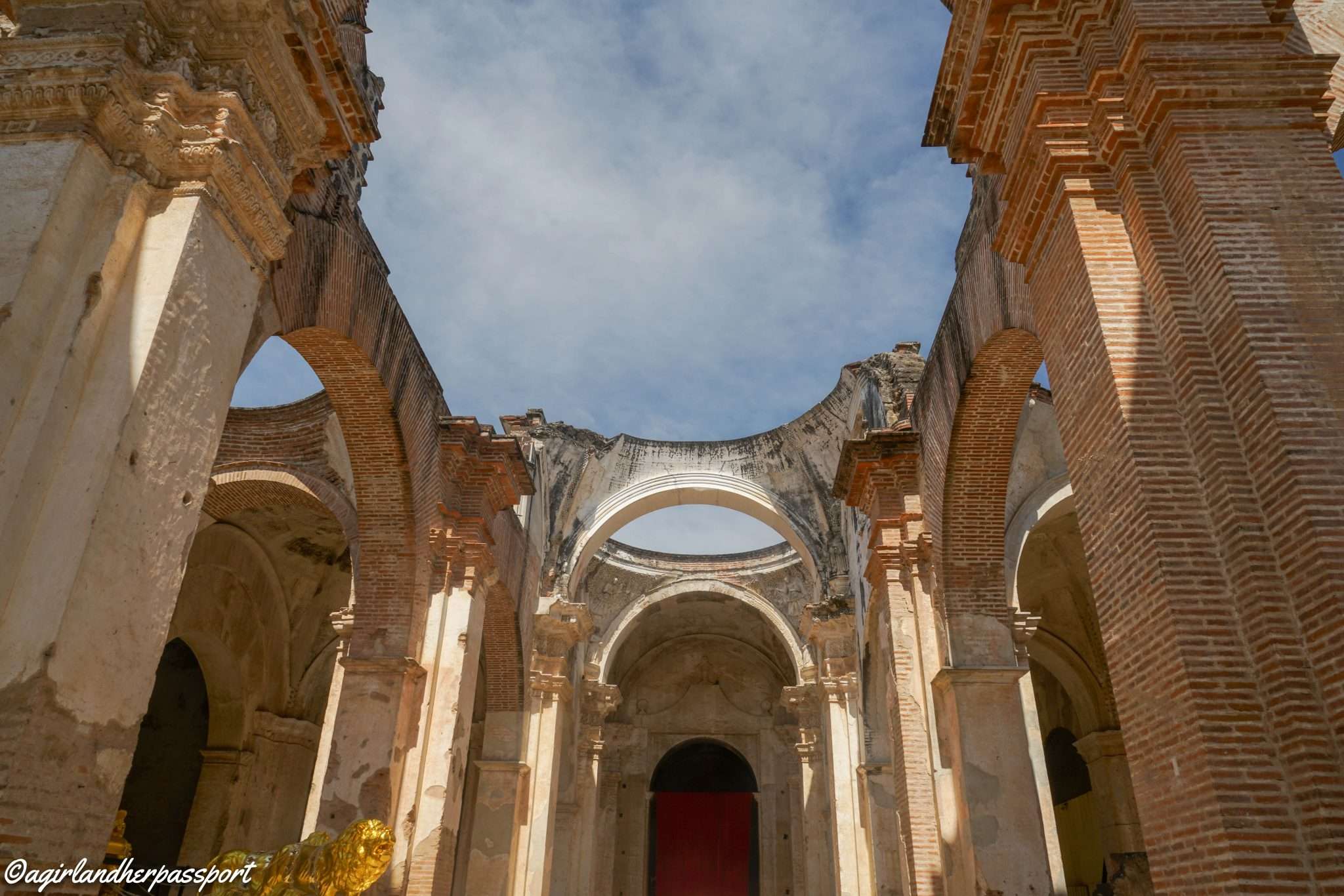 Escuela de Cristo is not a ruin! It is also not as ornate as many of the churches in Antigua. However, it is a fully functional church and always seemed to have activities going on inside. The church participates heavily in Semana Santa activities, and if you go right before their procession starts on Good Friday, you can see the floats and andas lined up inside the church waiting to get started. Escuela de Cristo also contains a convent, but it is not open to the public. You may be able to sneak a peek inside if the door is open. This usually happens in the afternoon.

One day I walked by here and noticed preparations for a big wedding happening. Later I walked by, and the wedding had started after about an hour, I walked back by on my way to my Airbnb, and the wedding was still going on! Something to look for is the German Shepard that hangs out above the entrance to the convent. He/she is up there many days and usually has on a purple bandana! 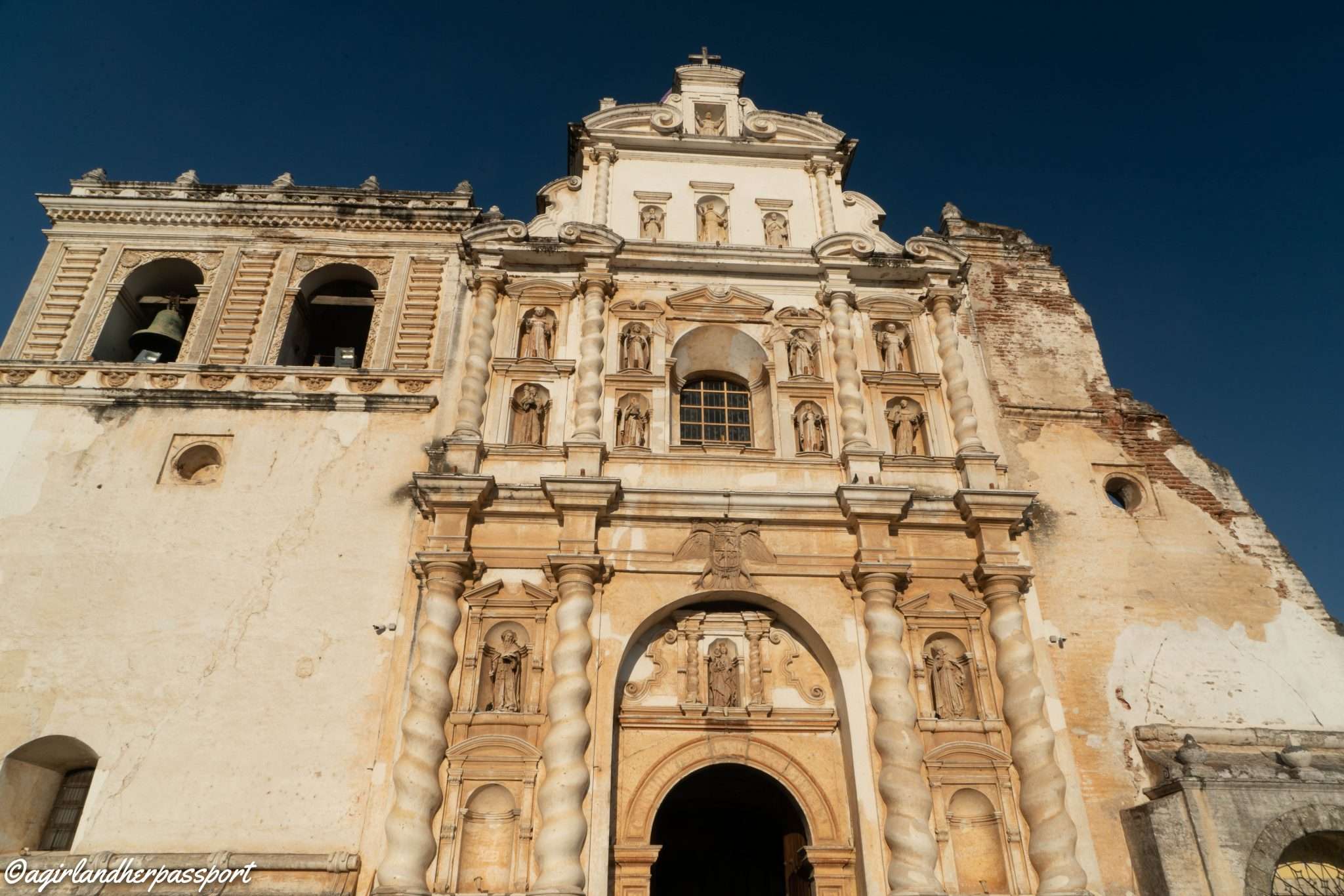 Not too far from Escuela de Cristo is Iglesia de San Francisco. This large church compound also takes up a full city block in Antigua Guatemala. Outside the church is a parking lot so be careful when entering through the gate. Also outside is a market. During Semana Santa, the parking lot and the market were packed with people and vendors. It is a great place to pick up some souvenirs or presents.

Iglesia de San Francisco was damaged in the 1773 earthquake and was not restored until 1967. Much of the convent area is still in ruins, and you can pay to go inside to see them. The facade of the church is stunning, and my recommendation would be to go as the sun is setting as it casts a beautiful glow around San Francisco. 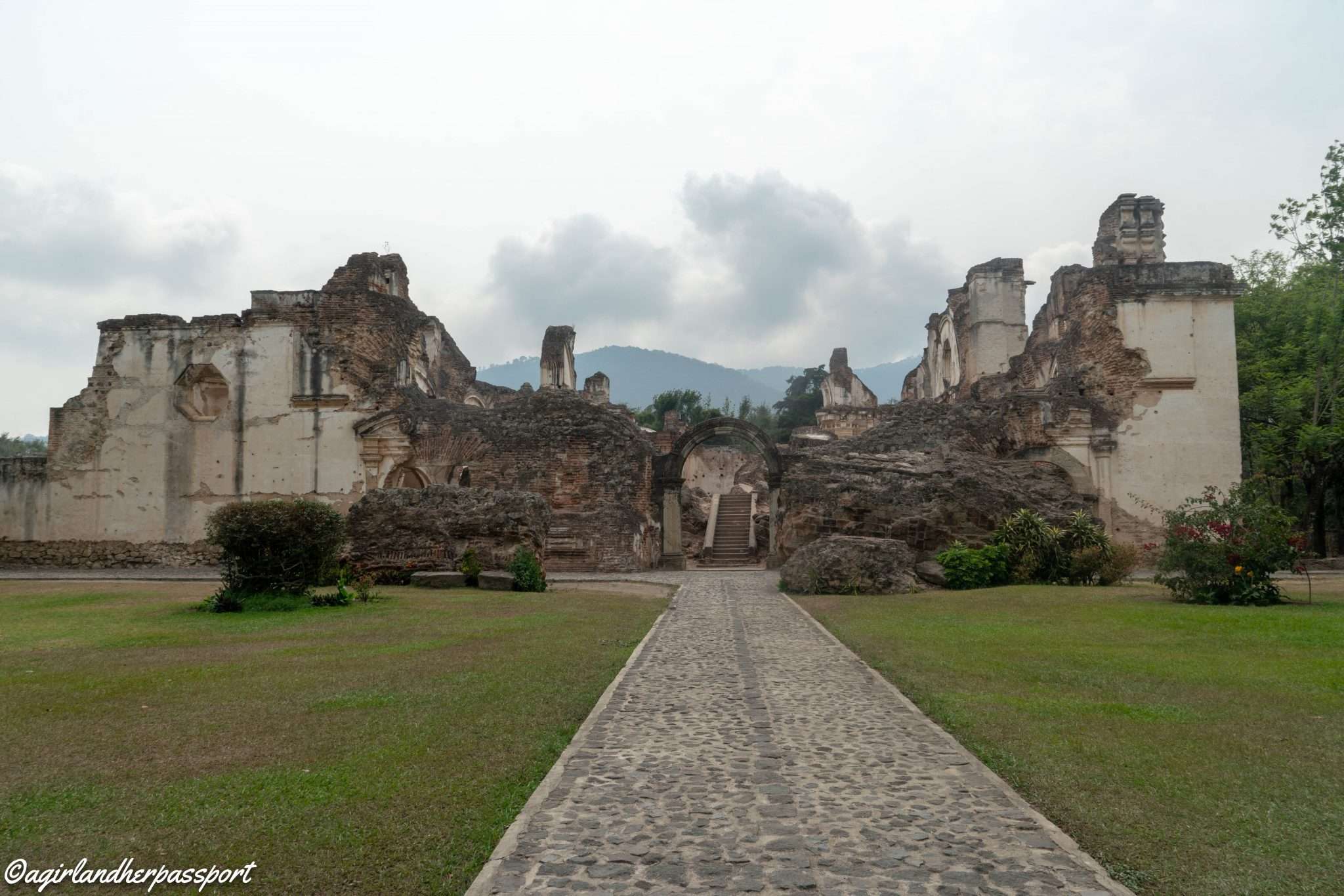 One of the largest ruins is La Recoleccion Convent. It is located on the outside of town right near the local market. The complex was started in 1701 and was finished in 1707. The buildings were greatly affected by the 1717 earthquake, but the buildings were repaired. By 1740 there were 35 friars living at La Recolección Monastery. Like many of the other churches, it was destroyed in 1773 although some of this destruction was from the 1751 earthquake. Over the years following, the complex was used for many other things leading to more destruction. Now the complex is protected. It also costs 40 Queztals to enter. 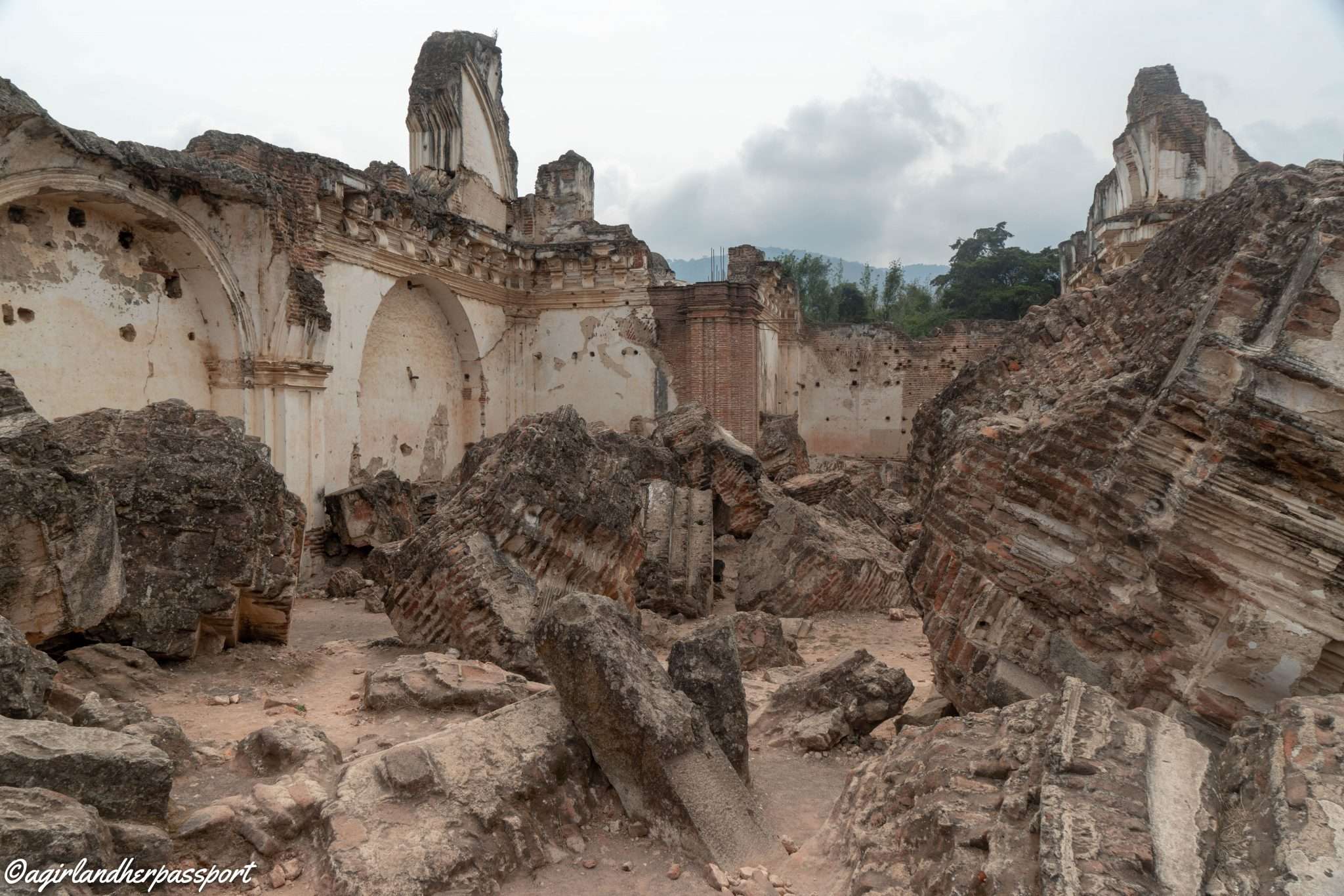 This is only a small fraction of the churches to see in Antigua Guatemala, and if you wanted to, you could spend weeks seeking out each one. I am sure they each have something unusual to offer. I only wish I had discovered some of them sooner so I could visit them more than once.

Have you been to Antigua Guatemala? What was your favorite church or ruin? 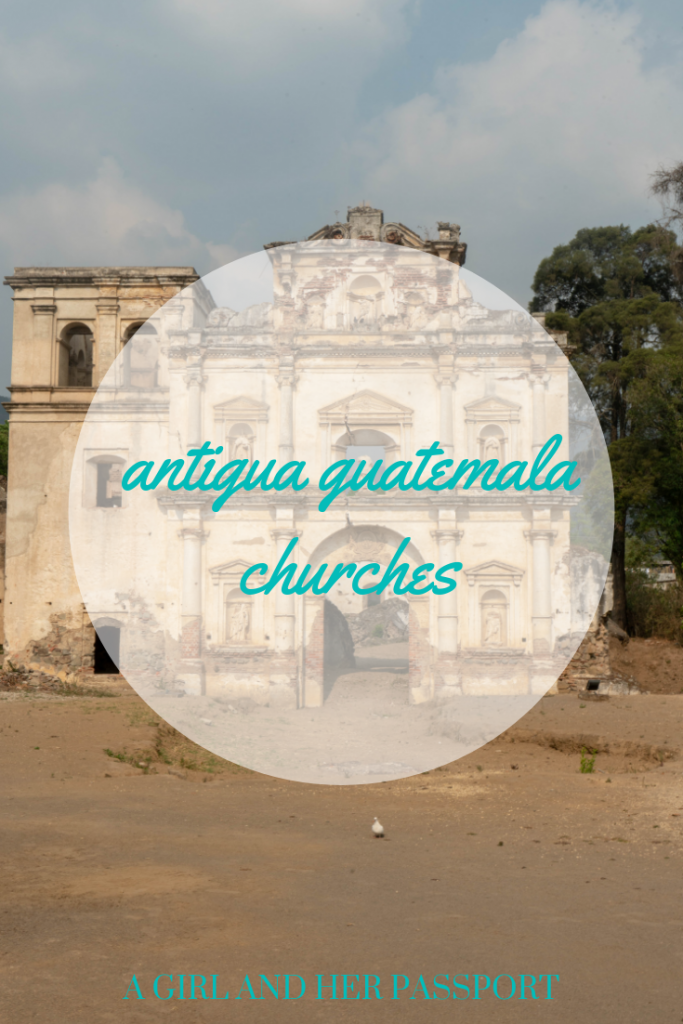