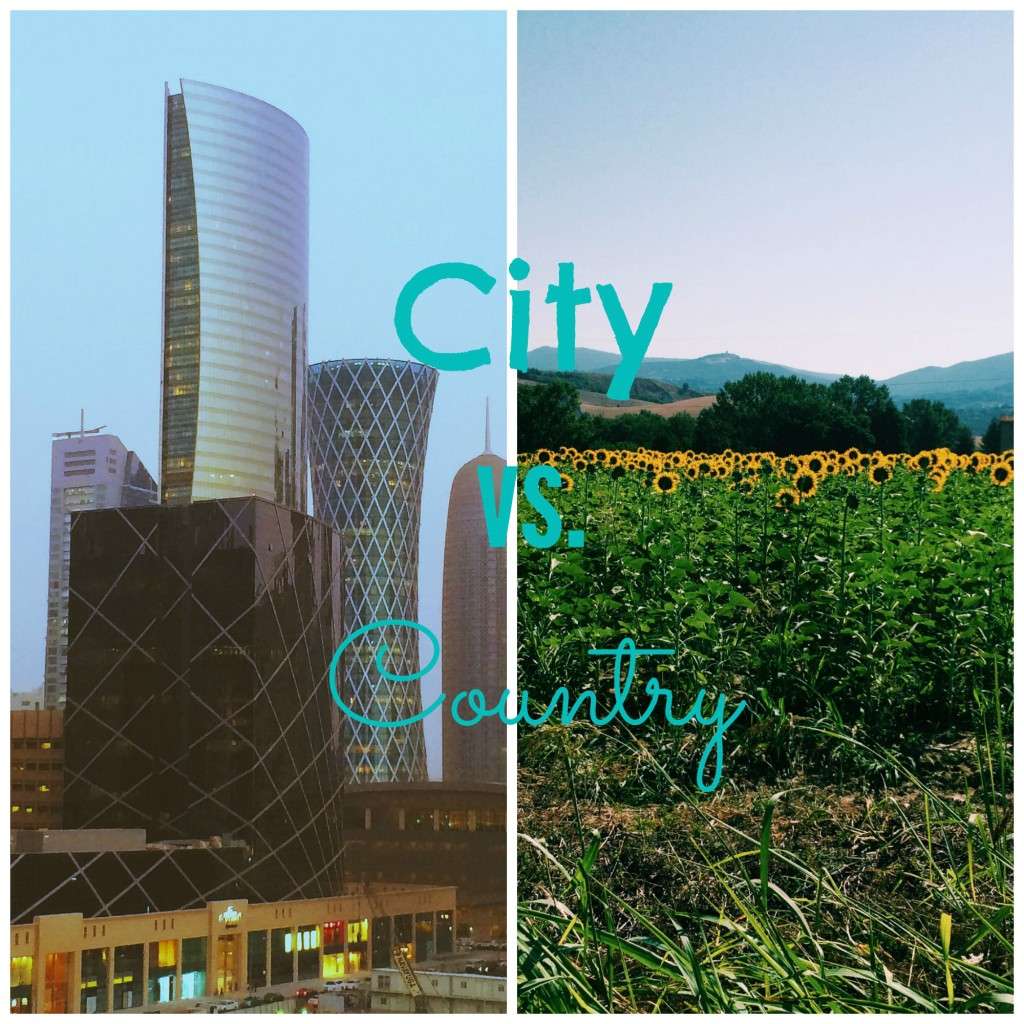 Raised in the suburbs of Dallas and then moving to New York City and living there for seven years, I was very convinced that I was a city girl through and through. Then after I moved to Qatar and I started to travel more. I began to notice that I didn’t like my city visits as much and was very much enjoying the visits to the country on my trips. Last April I visited New York City for a conference, and I was overwhelmed by how noisy it seemed. I met a friend there, who is also an expat in a small place, agreed that it was very loud. Of course, there are things I don’t like about visiting the country too. These only really became apparent to me as I started to travel, and some became apparent when I visit the U.S. Here are some of the things I have noticed while traveling in the city and the country.

As I mentioned earlier, cities are loud. Cities have lots of people and traffic. Cars honk and people talk loudly on their cell phones. I almost couldn’t handle being outside in New York City the last time I visited. I wanted to be in my hotel room if I wasn’t at the conference. The country is quiet. No worrying about being woken up by a cop car screaming past your window at 2 AM. People don’t walk around on their cell phones either having loud conversations. There is certainly no traffic.

Cities are crowded. Every large city I have visited over the last two years was full of people, which is to be expected. I am just not used to it. I now know, I don’t like being pushed or jostled. I guess when I lived in New York, I didn’t notice or didn’t care. I can’t remember. The country is spacious and has ample space for everyone. I was never jostled in the countryside of Italy.

Cities have public transportation. I love public transportation! It is usually the fastest and most efficient way to travel in the city. It can also be the most affordable option. The country might have a train, but there is no subway usually. On my last trip to Italy, I rented a car. It was fun, and it gave me freedom, but it was expensive when factoring in tolls and the cost of fuel.

Cities have ample options for things to do and see. I don’t even think I saw all the things New York City has to offer even after living there for seven years! You will almost never be bored by visiting a city. In the country, you may have limited options, but it also leaves ample time to relax. You can catch up reading or your favorite hobby.

The country is nature. There is nature everywhere you look. You never run out of things to look at in nature, and it is constantly changing. The city has some nature, but you will have to seek it out, and it may be manicured nature and not wild.

I could probably name several more contrasts between the city and the country, but I would like to hear what you think. Which do you prefer, the city or the country and why? I am beginning to think I am a country girl or at least a small town girl.