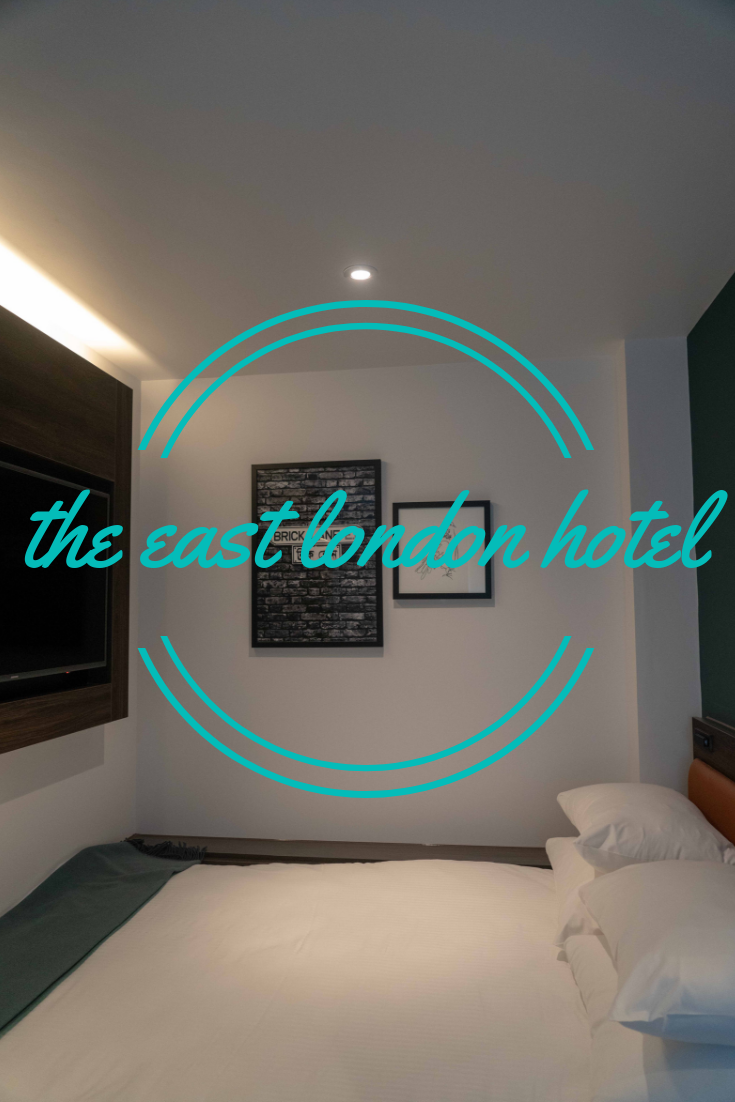 Recently, I was invited by The East London Hotel to stay a night. While I was their guest, all opinions are my own. The East London Hotel opened in September of this year in a former wine warehouse. The hotel prices are affordable, especially for London, but also because it feels like a boutique hotel.

My room at The East London Hotel was a standard double room with a window. Some rooms do not have a window, so if that is important to you, make sure you double-check when you book. I arrived at night so I couldn’t see much of the view till the next morning.

While the room is on the small side, it is well thought out and I had enough space. The bed takes up much of the room and is one of the most comfortable hotel beds I have slept in! Plus it had four pillows and I love having tons of pillows. 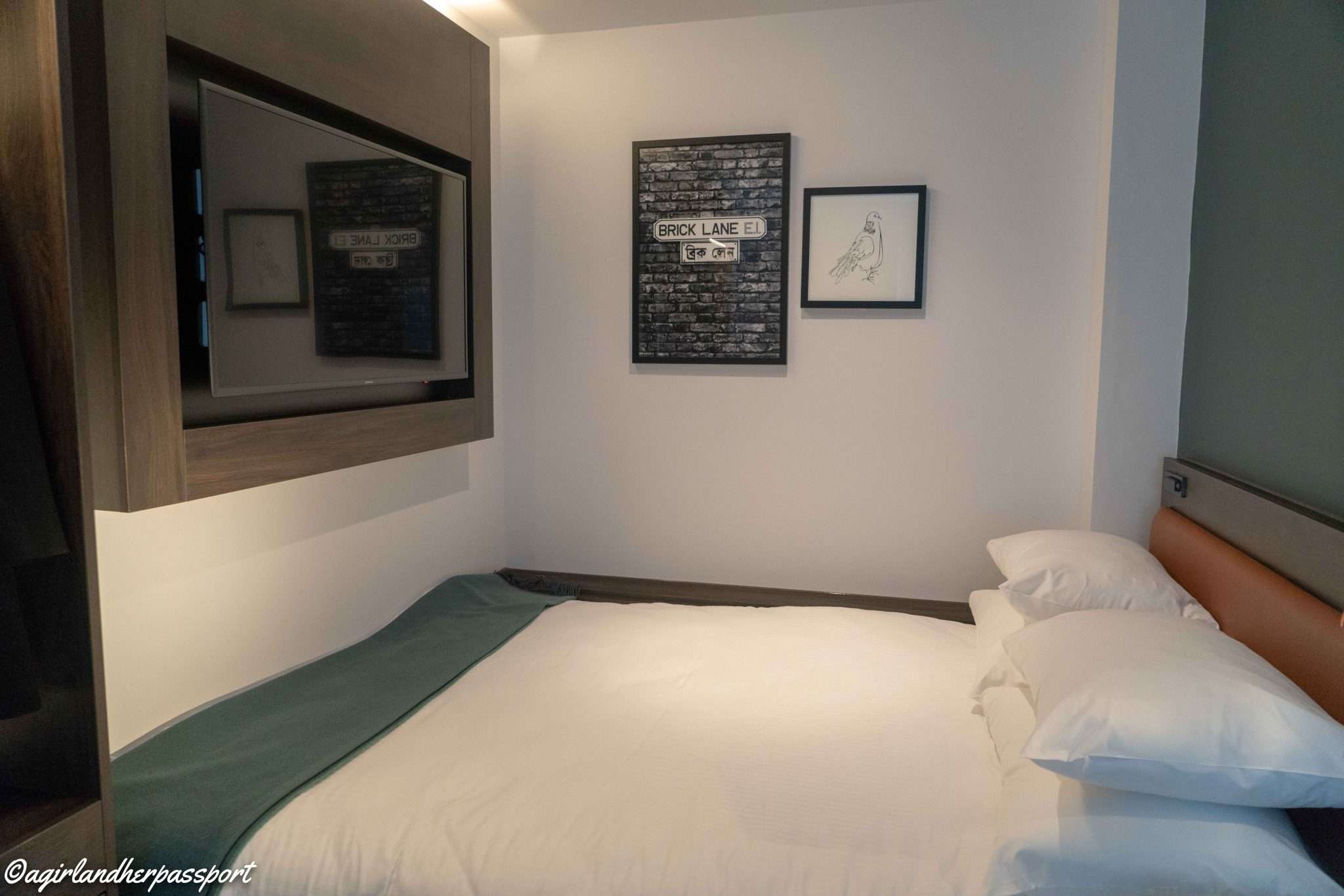 Under the bed is storage for your suitcase, which if you had two people in the room you would need. Inside the headboard are built in reading lights that turn on when you pull them out. Right above the bed is a massive flat screen tv which is great when you come back to your room and want to chill before going to sleep. 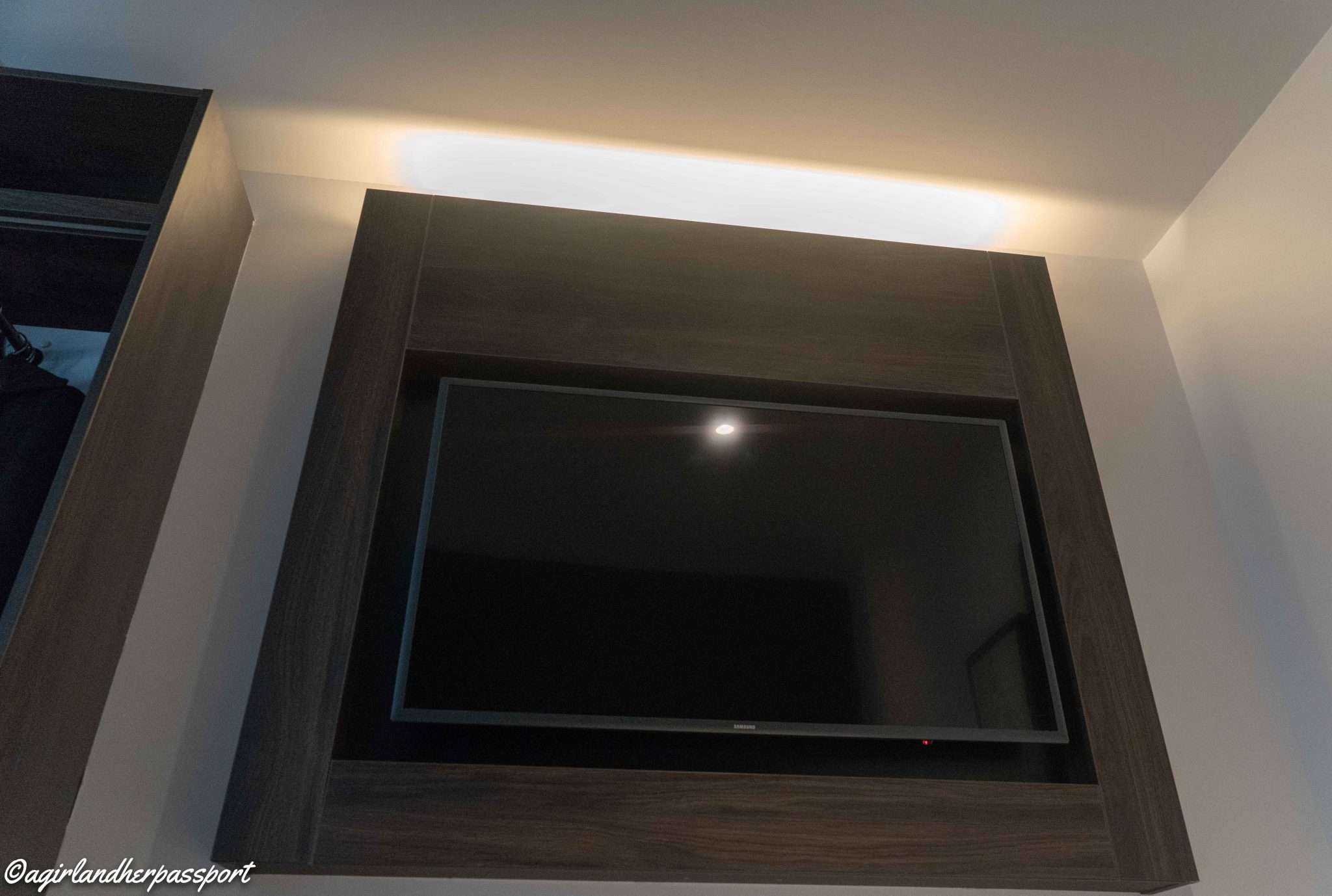 The bathroom is also compact but never felt too small. It feels luxurious with the rainfall showerhead and modern design. Hot water was almost on instantly and the hotel’s toiletry brand is Rituals, which I love. 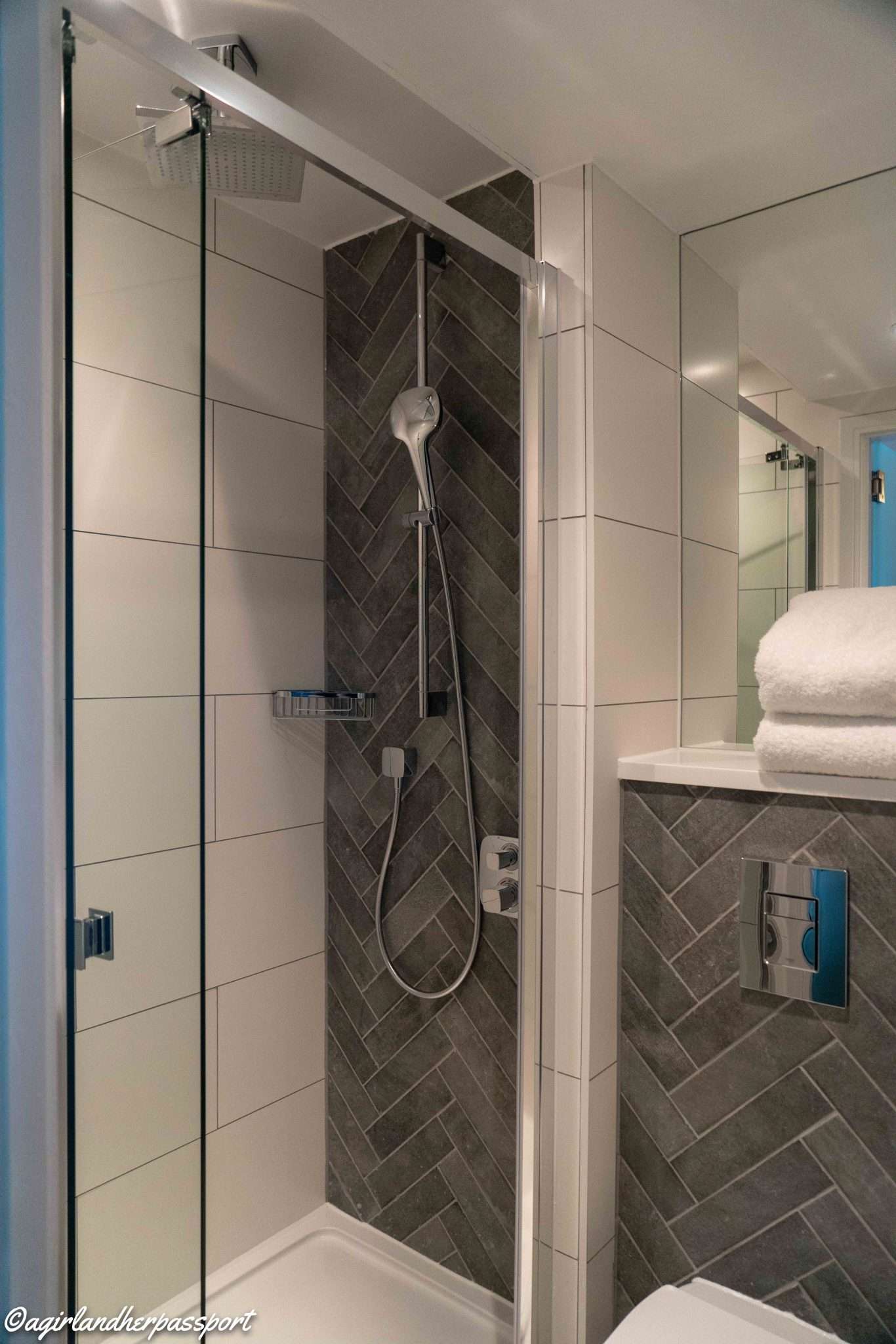 In the morning, I raised the window shade and was greeted with a beautiful view of the park across the street. I enjoyed looking out over it while I enjoyed a coffee from the Nespresso machine in the room. 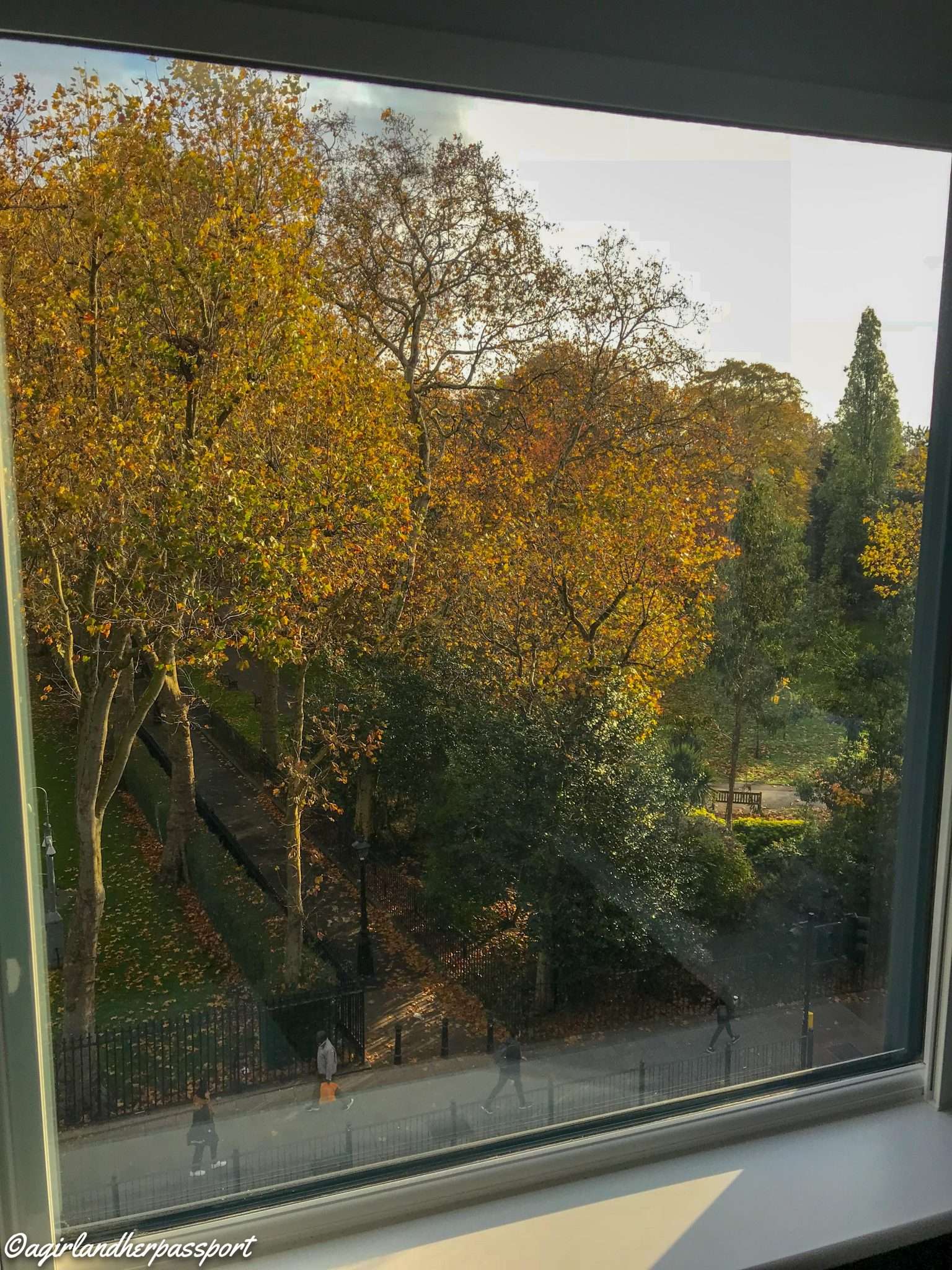 The only drawback about the room for me was that they did not install any international plugs, which would have been easy to do in a new hotel. The one USB plug was a good alternative though. 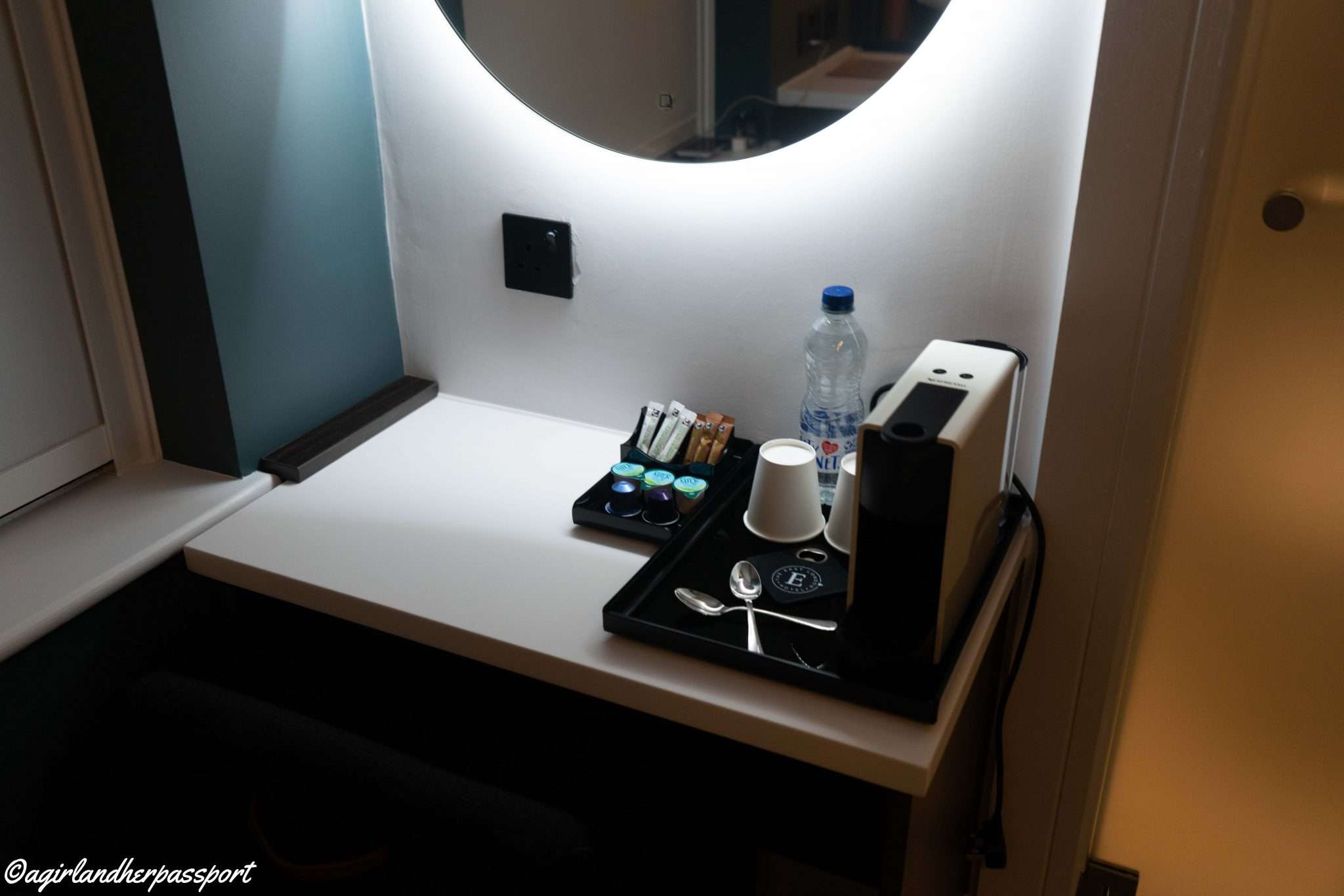 Since I only stayed one night, I am unsure of how the good housekeeping was once a room was slept in. What I loved was the switch inside the room that changed the color of the sign outside the door. Red was for do not disturb and green was housekeeping requested. I hate those hangtags and loved this alternative. 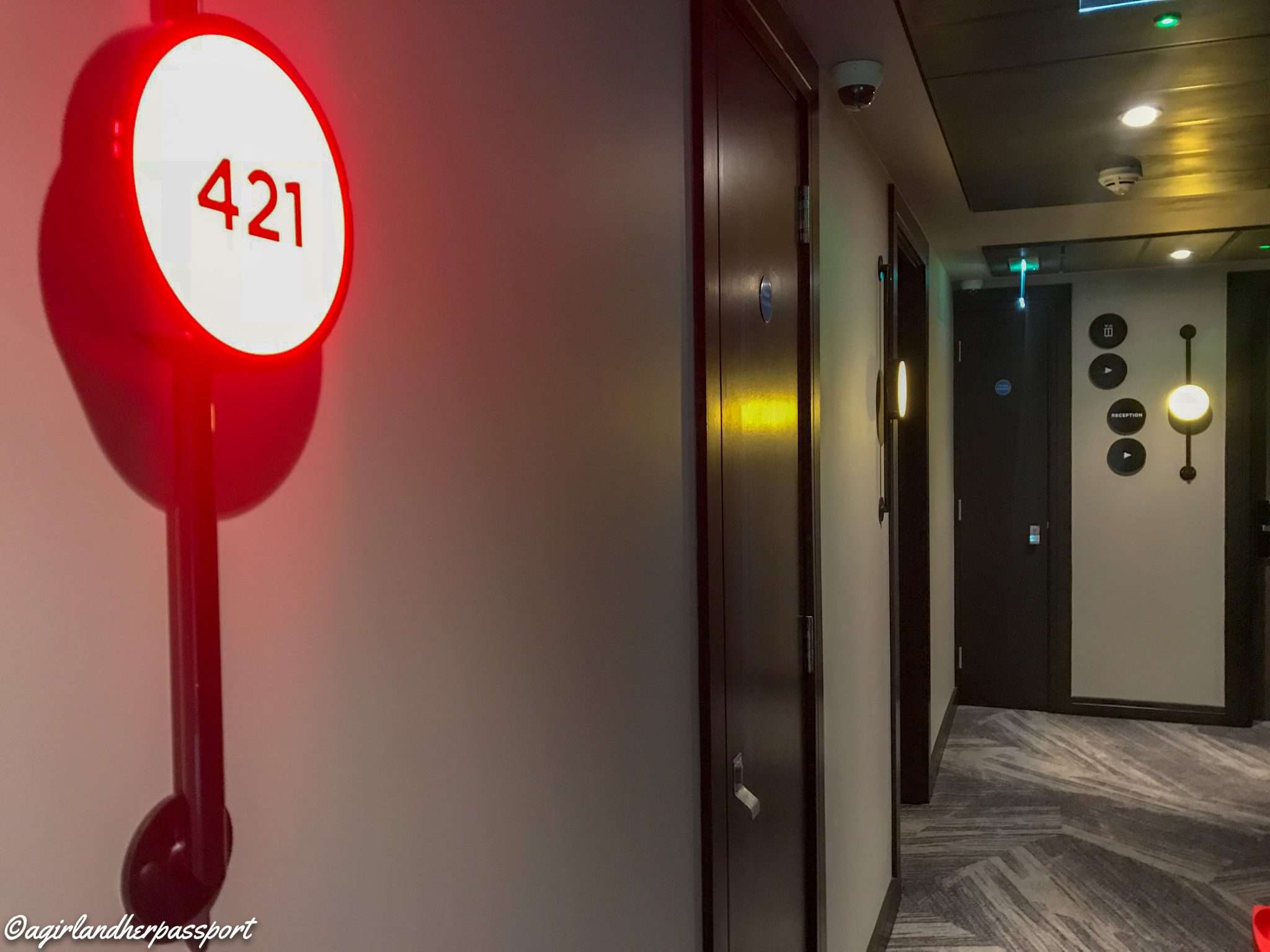 Breakfast is served on the ground floor of the hotel. This area is also the reception area but feels more like a coffee shop or bar. Rather than it being a breakfast buffet, which I was expecting, it was a sit-down breakfast. You had the choice of a bagel or sourdough break with two toppings. You also got a coffee and juice. Then you could add a pastry or yogurt. 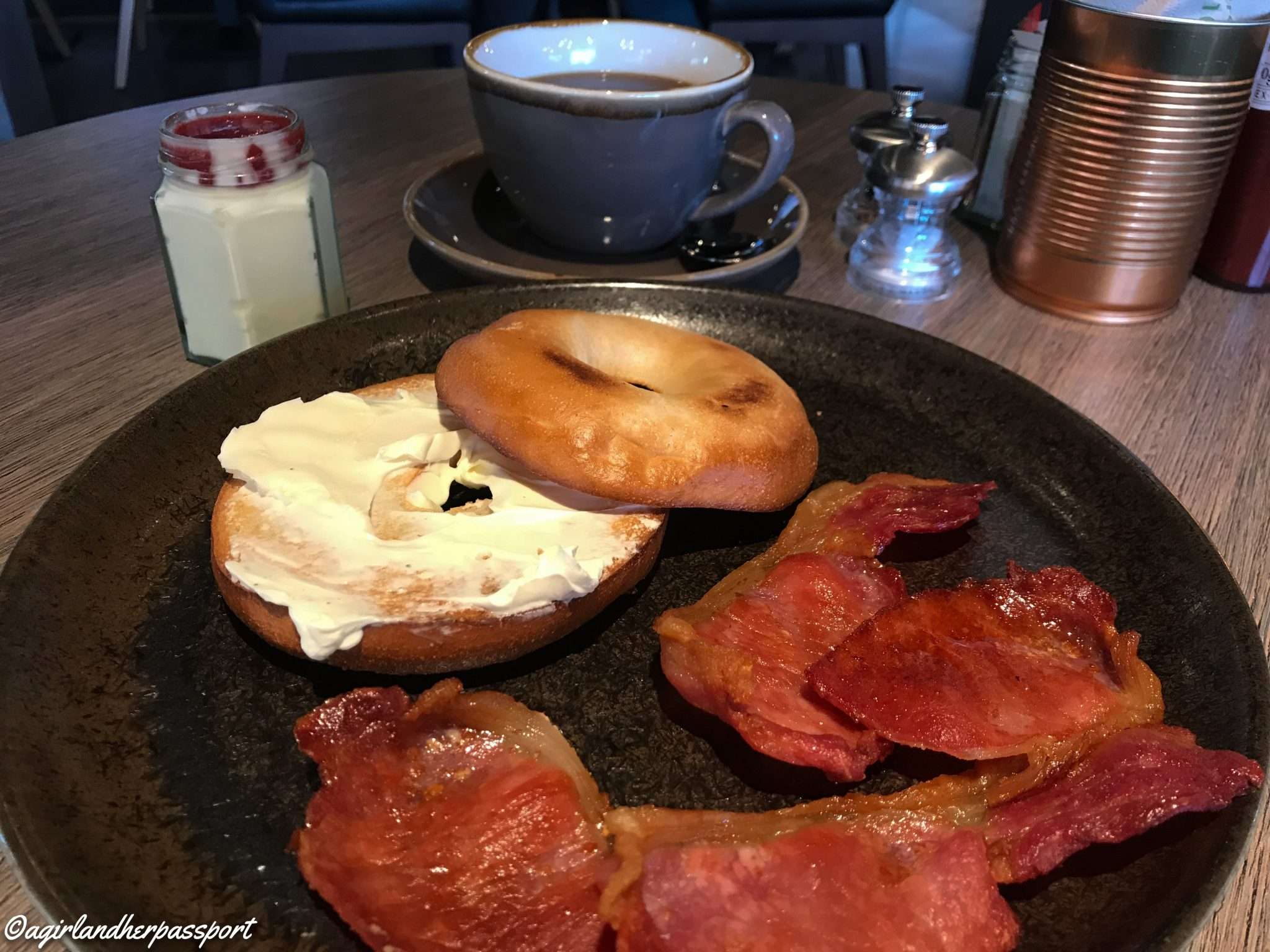 I opted for a bagel with cream cheese and bacon on the side with yogurt. The service was fast and the food was good. I wished there had been a healthy option like oatmeal though. There was also no water offered during breakfast.

In what is probably an upcoming trend in hotels is that there was self check-in. Despite this, I was guided through the process with the help of a staff member. After entering your last name and confirming your dates, you are instructed to take a key card and place it on the reader. The card is then made. You can make more than one if you need. Check-out was a similar process and you just turn in the key card in a drop box.

What I liked about not having a reception was that it allowed the room to be used for other things throughout the day. In the morning, breakfast is served. Later the room is a coffee shop and a bar. People were working on their laptops or watching the television. It seemed like a way for people to meet others like you would in a hostel setting. 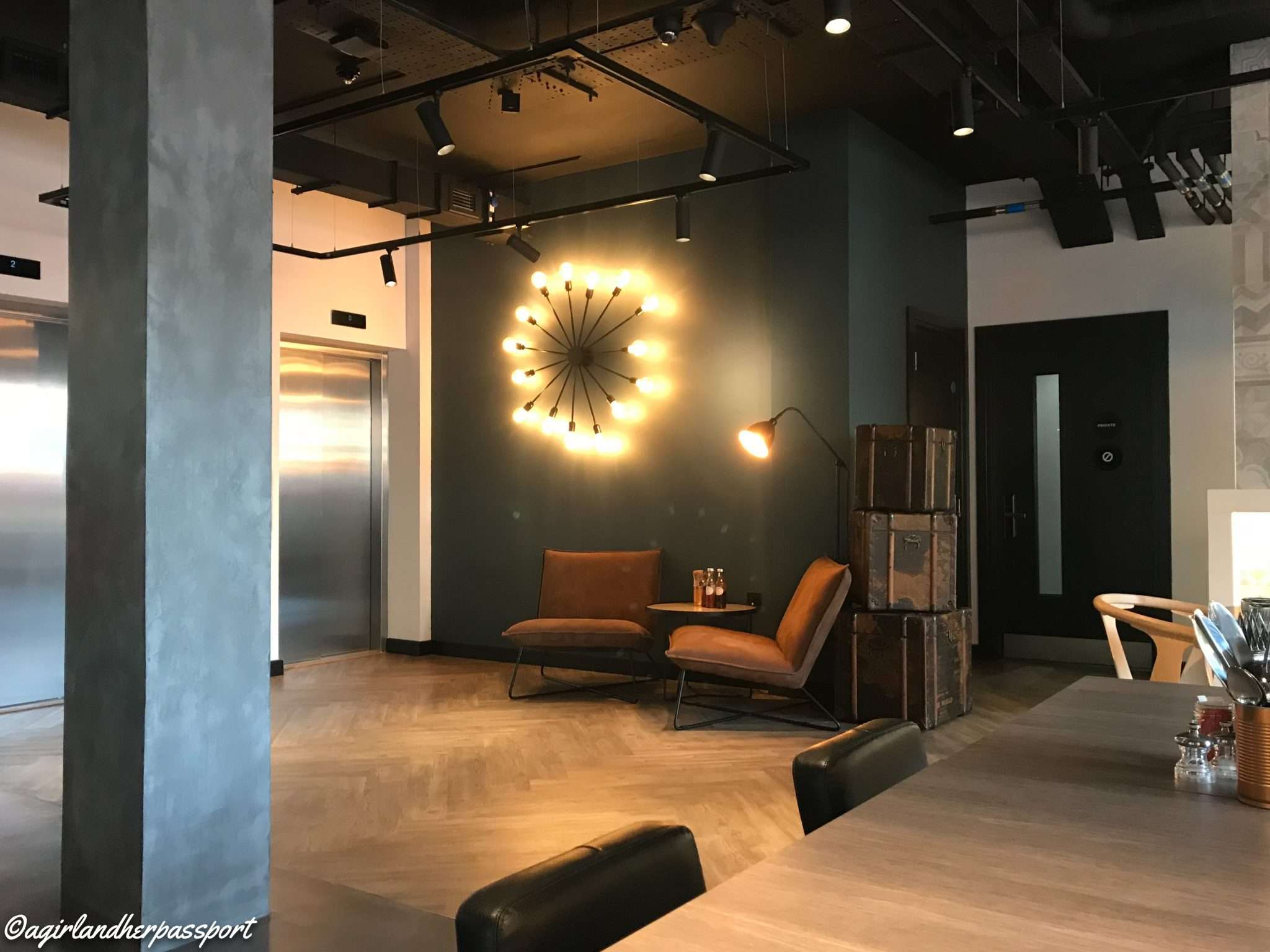 Another trend I see happening in hotels is the lack of phones in the rooms and offering contact via Whatsapp. The East London Hotel also operates on this model. I messaged them a question and was immediately answered. The drawbacks to this are the inability to give you a wake-up call, which if you have an early flight to catch it could be an issue, and you have to have Whatsapp downloaded.

Obviously, The East London Hotel is in East London but the great thing is that is two blocks from the Bethnal Green tube station, which means you can be in Central London in about 20 minutes. The V&A Museum of Childhood is right across the street as well as the museum park and Bethnal Green Garden. Behind the hotel is Paradise Row with several restaurants and bars. The location makes it a great place to base yourself during your London trip.

Overall, I enjoyed my stay at The East London Hotel and would definitely stay again. I loved the cozy vibe of the main floor and the English feel of the rooms and while it doesn’t have tons of amenities, the great location makes up for that! 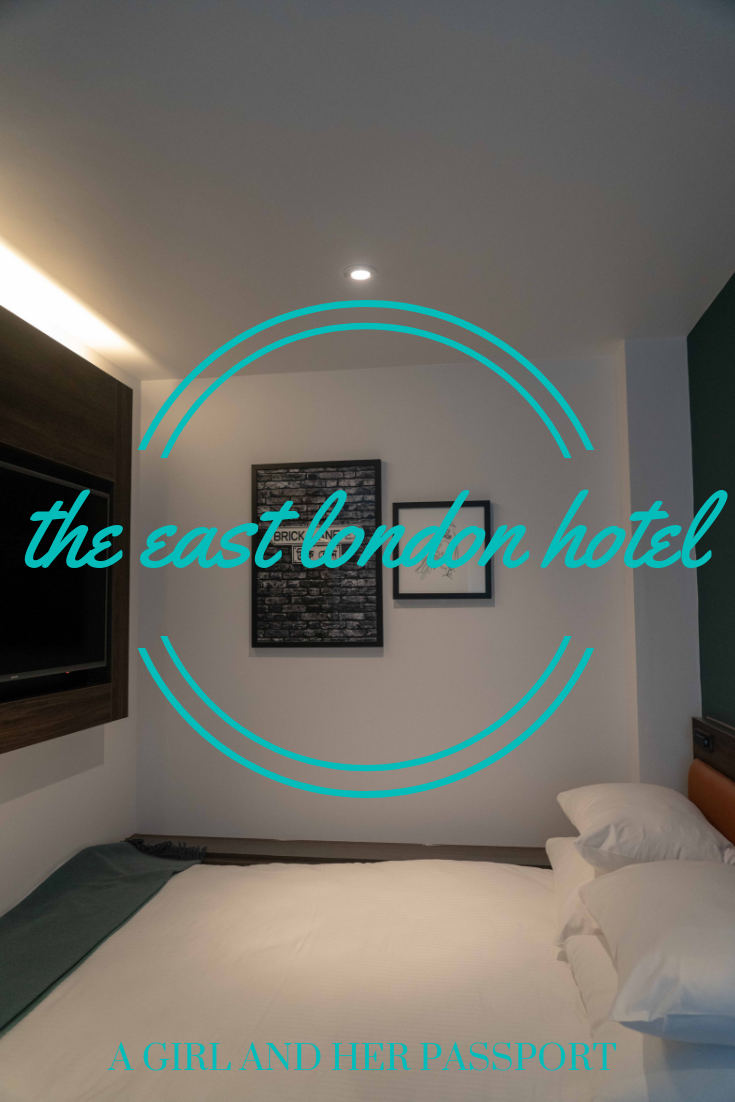 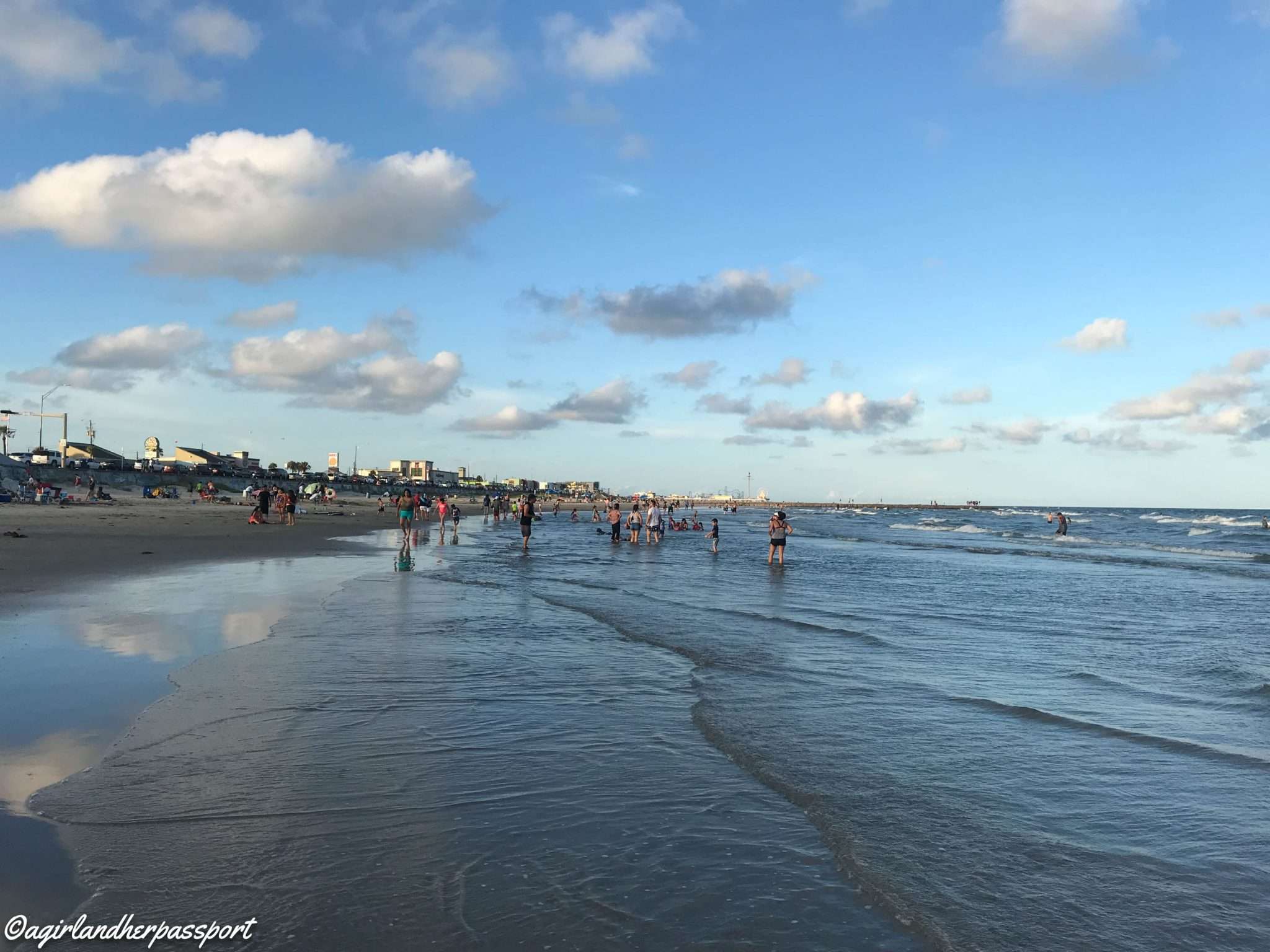