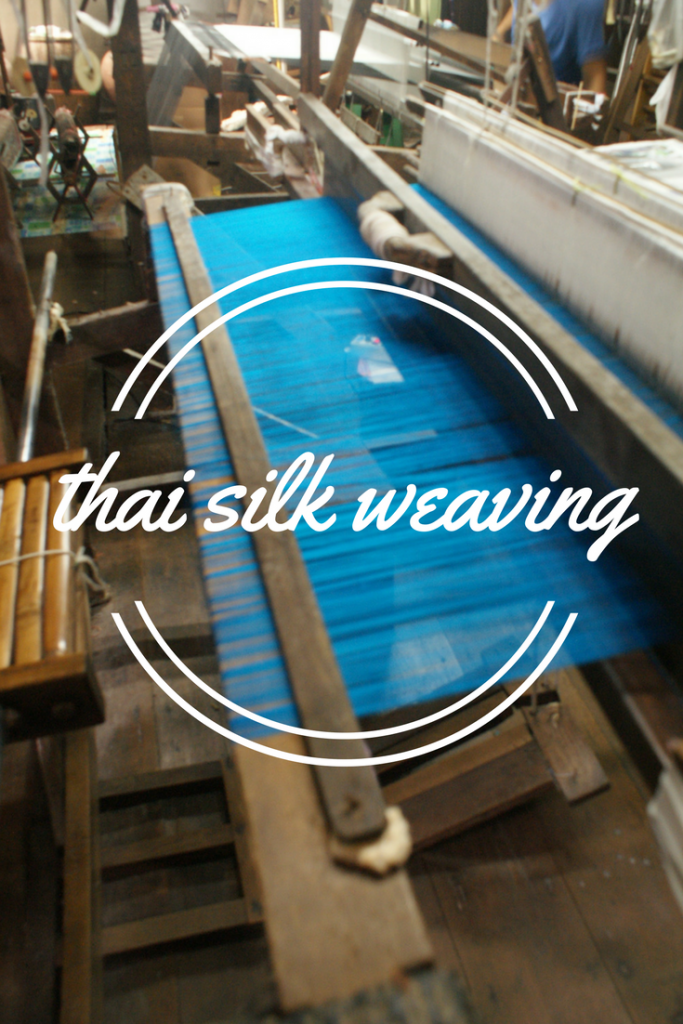 After walking through the traditional Thai style house that Jim Thompson built in Bangkok, we walked along the canal behind the house. The guide was taking us to see the silk manufacturing area or at least that is what he called it. Several times he repeated that this was the Muslim neighborhood of Bangkok as if that was relevant somehow. Along the canal, we pass several small food carts that had set up chairs along the covered walkway as if it was a restaurant. While the Thai people are too polite to stare at these two western girls walking through their neighborhood, it was clear they were surprised to see us outside a tourist area. We crossed a footbridge that led us into the neighborhood. Being that it was a weekday morning, the neighborhood was quiet as most people were at work or school. The buildings were closely packed together, but well-kept and cared for. 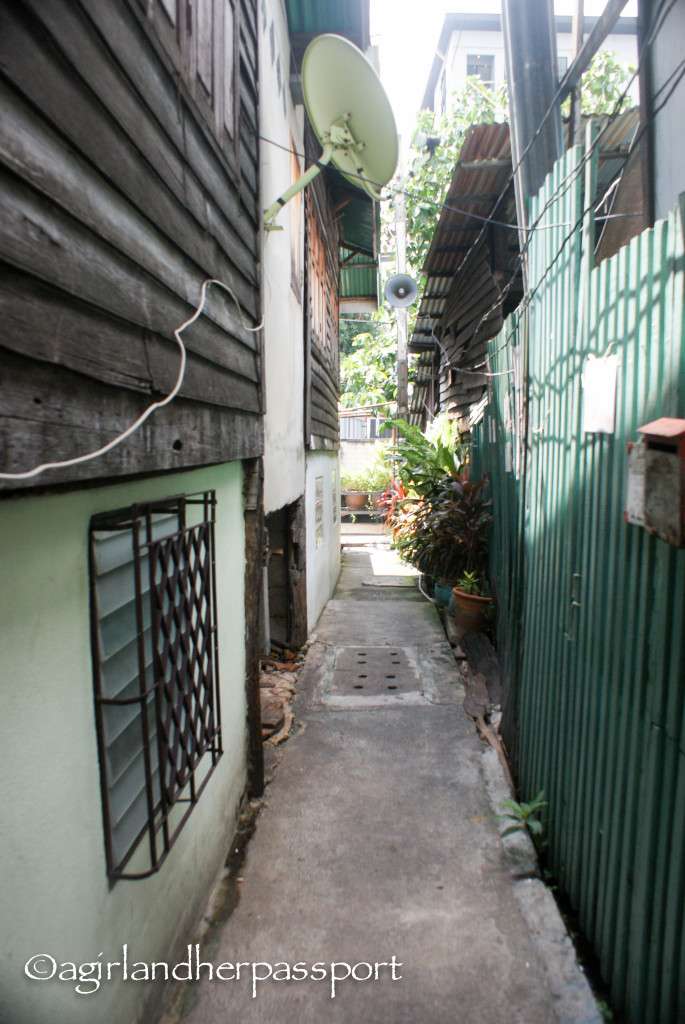 Walking down the canal path on the opposite side of the Jim Thompson House, we turned into a small street or in Thai, a soi. Most people would call it an alleyway, but since people lived on the street, it seemed unfair to call it an alleyway. The guide announced we had arrived! Arrived, arrived where, I thought. We entered what looked like a small shack, nothing like the neat, orderly houses facing the canal. An older Thai man sat just inside and spoke to our guide. We took off our shoes as is customary in Thailand. The guide explained that this man worked with Jim Thompson and still manufactured silk for the company. The guide urged us to go up some small stairs without explaining why and for a minute I was worried about what I was going up to see. 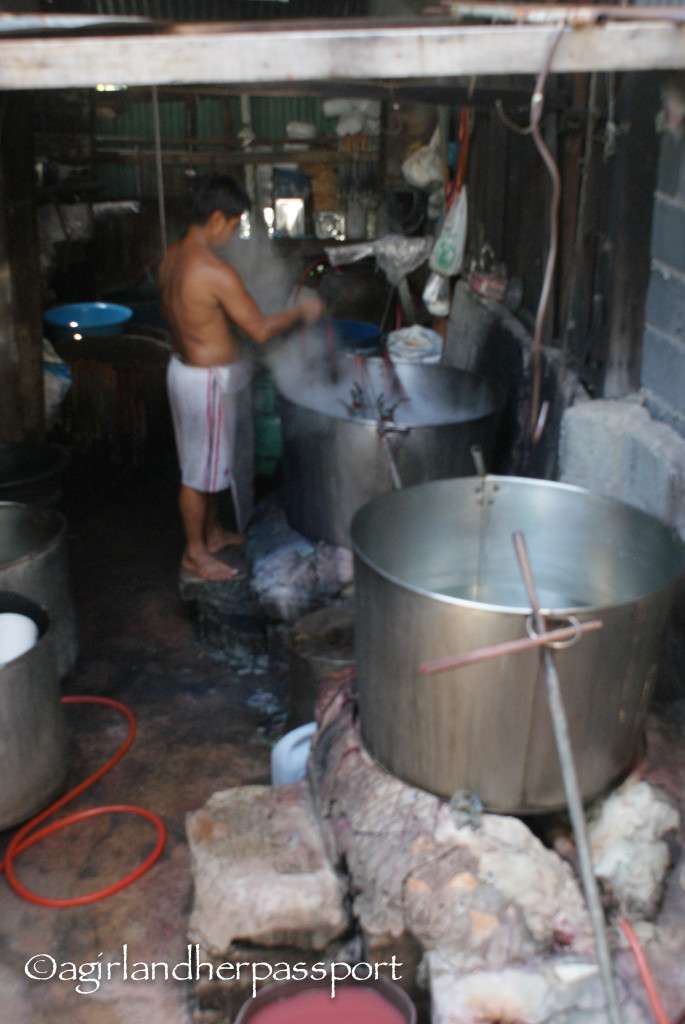 We ducked under a pipe that had bright blue silk drying on it. On the way up, you could see a man standing over huge boiling pots of water. The guide explained he was dying silk. Emerging at the top of the stairs, we had to duck again into an attic space. Looking up, I was in awe! There before me were row upon row of neon bright skeins of silk hanging to dry. The colors were so intense; I had to blink in order to focus on them. To get further into the room, we had to crouch down under the first set of silk skeins. The color screamed out at me to touch it, but I didn’t dare in case I would be ruining the process. Once woven together as a piece of fabric, the silk would not be so bright, but would still be beautiful. 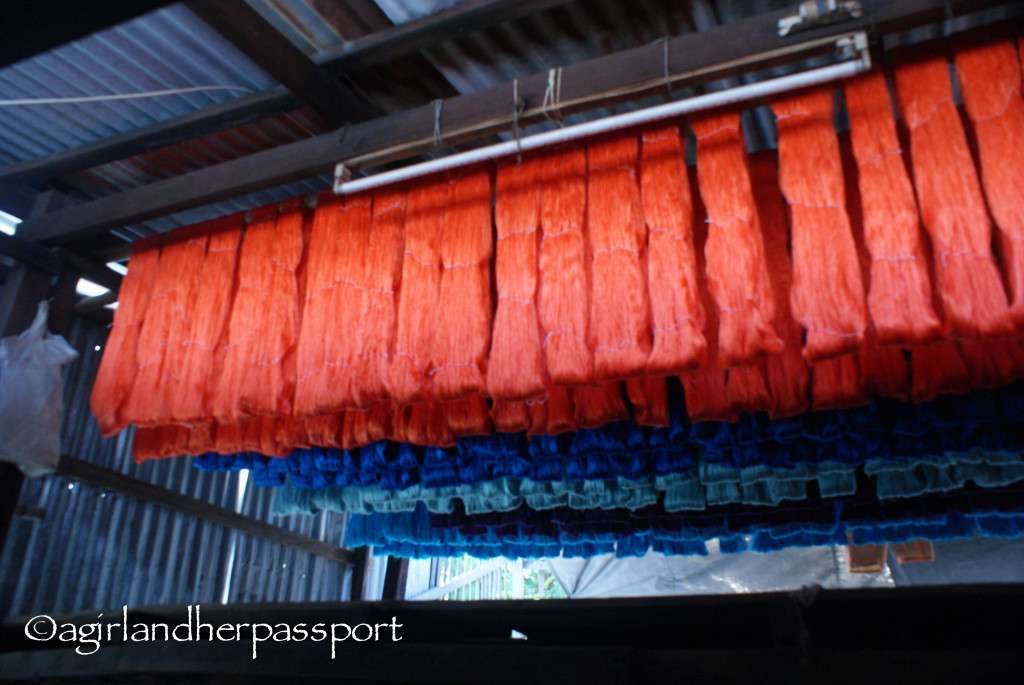 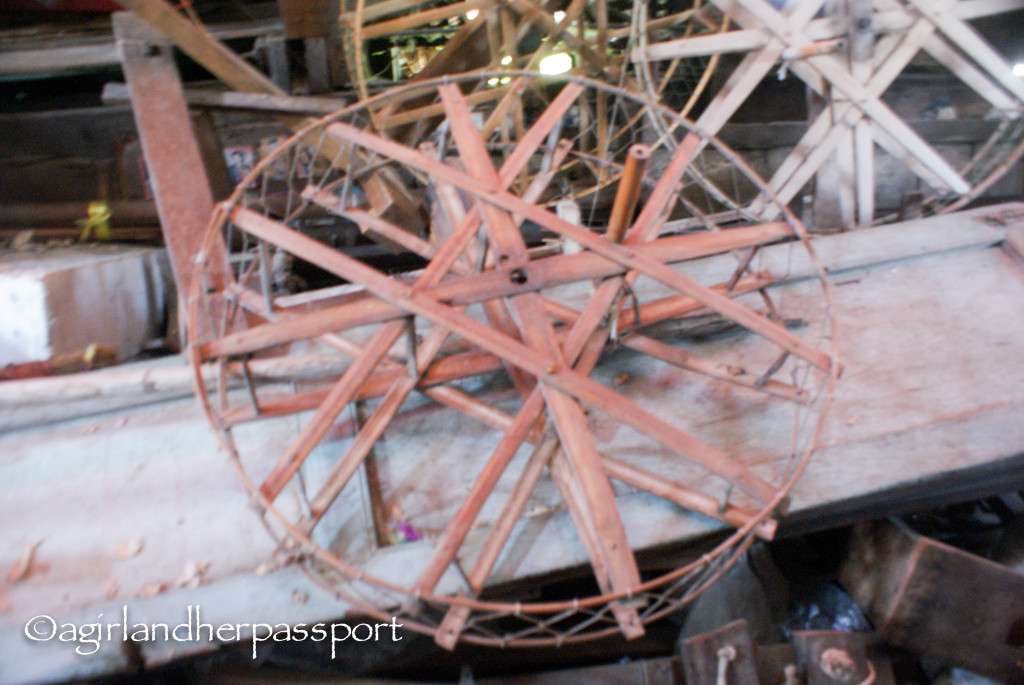 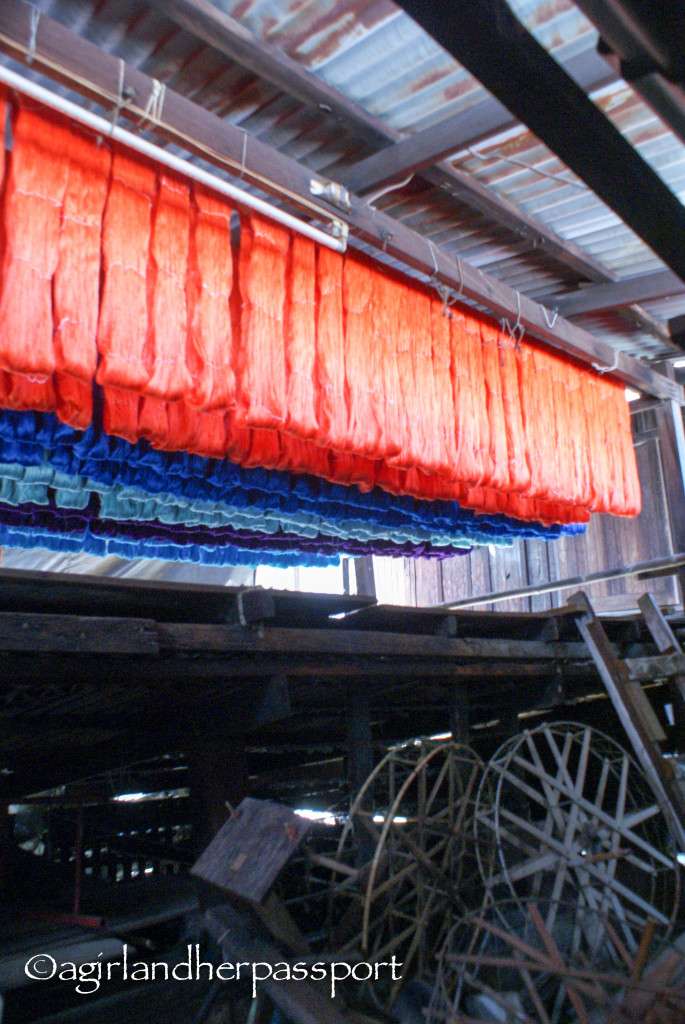 The floor was covered in pieces of wood, and I was conscious of trying to avoid splinters but also was extremely aware that what I was experiencing was special. I wasn’t sure how many people get to do this or know that it is an option to do, as I am sure that Mr. Aood doesn’t have busloads of tourists coming to his shop. However, he was extremely generous with his time. Upon returning to the ground floor, we went further into the shop, which had a lived in feel. In a corner of the shop, out of sight from the main door, sat a woman weaving silk into fabric. While I have seen wool woven, the silk weaving processed seemed more delicate and detailed. The silk is so fine; I am not even sure how the woman saw what she was doing. As you can see, the results are beautiful. 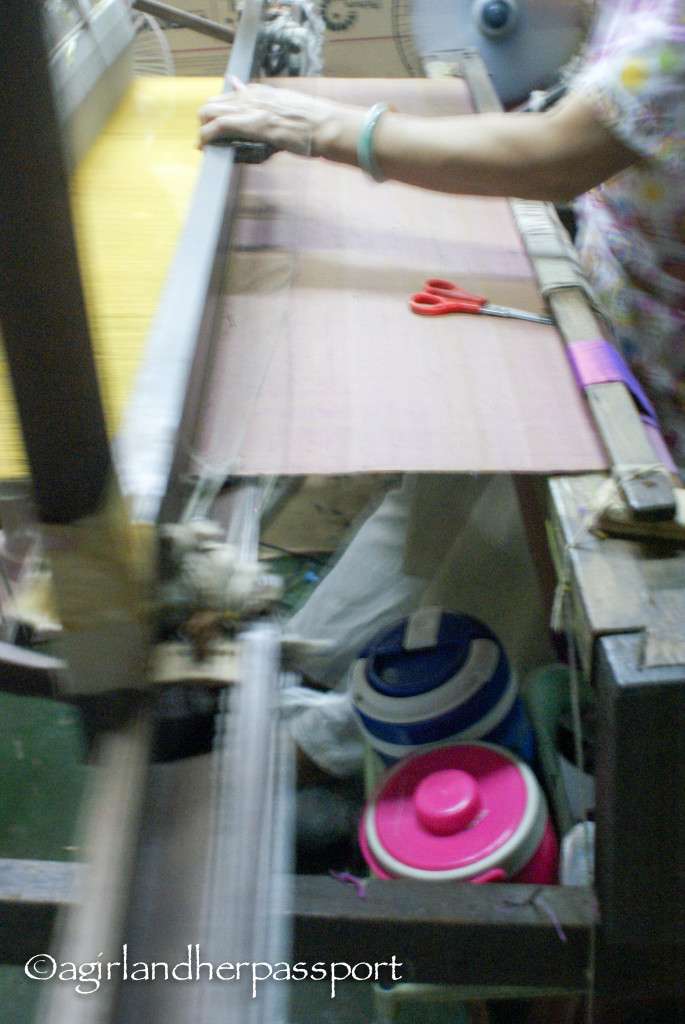 This beautiful silk would probably not be produced here today for two reasons. For one the Muslim community, I learned after returning home, in this area of Bangkok came from Muslims fleeing from Vietnam from the 14th to 18th century. These people helped the Thai fight the Burmese in 1767 and were awarded this land for helping. These people had brought the fine silk weaving skills with them. This too would have faded if Jim Thompson had not revived the trade in the late 1940s. Even today, most of the weaving has been moved from this neighborhood into factories and may not be there forever.

Getting there: My recommendation would be to find a tour to take you. While there are signs, I am not sure you could find it on your own. Also, Mr. Aood does not speak much English, and while I am sure you would be welcome, you might have a hard time communicating. My tour was provided by the Thailand Tourism Board as a part of attending TBEX Asia. Here is one tour I found, but I cannot speak to the quality or prices of the tour. I also found two articles with instructions on how to get there on your own, one is from Travelfish.org and the other is Tour Bangkok Legacies.

Have you been to one of these weavers on a tour? Tell us how you got there in the comments. 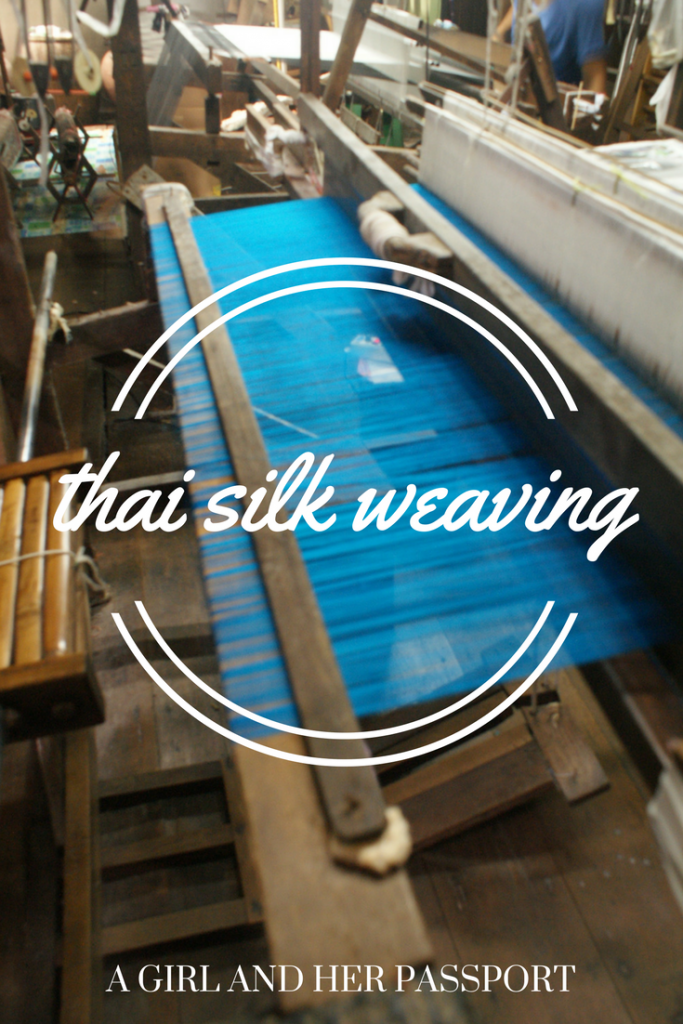 What I Do While Not Traveling 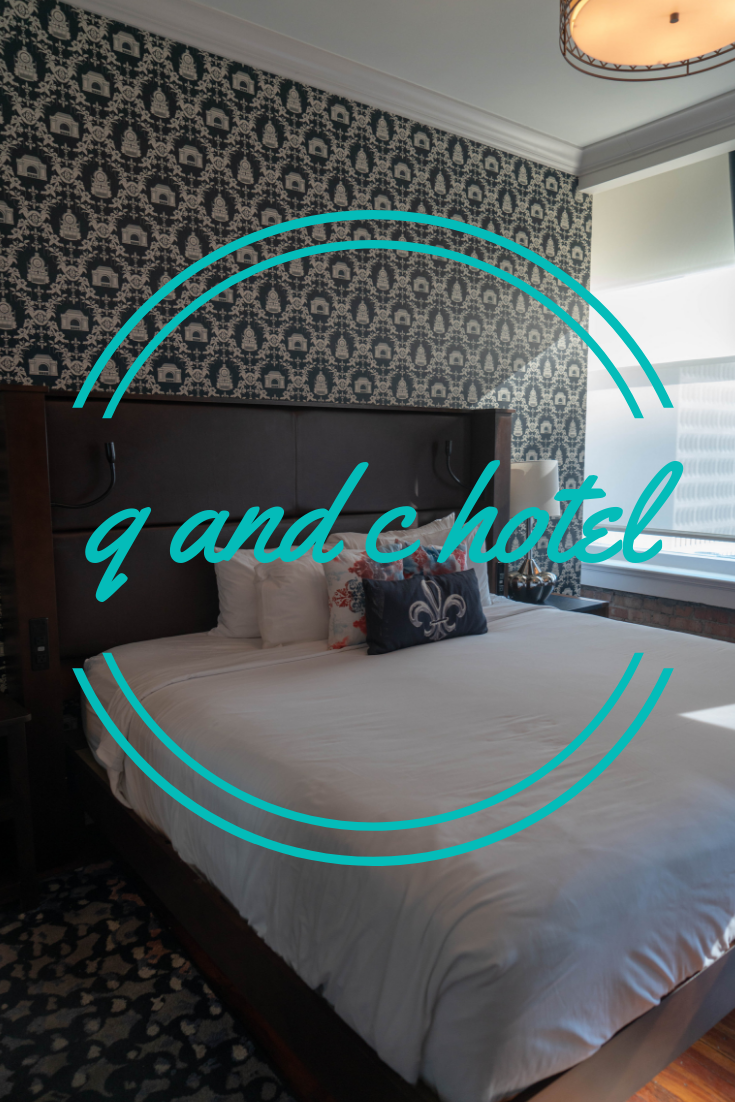 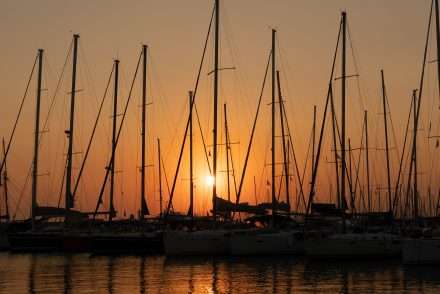