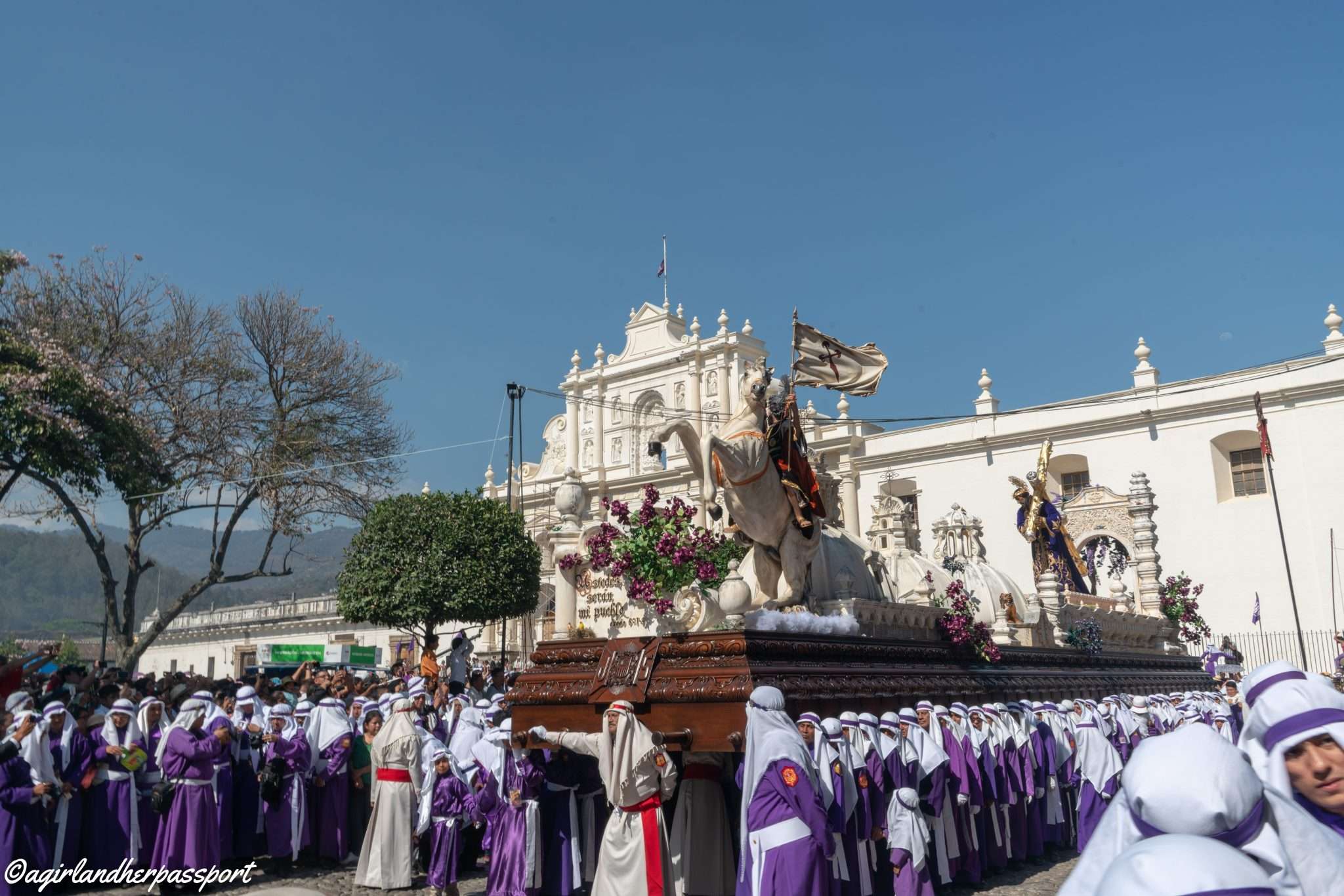 Semana Santa or Holy Week is the week leading up to Easter. In Antigua Guatemala, Semana Santa is a huge celebration in which Guatemalans from all over the country come to watch. The population of this town swells to capacity. With over 30 churches it is easy to see why people come here for Semana Santa. This tradition was brought by the Spanish when they colonized Guatemala. The celebration also happens in Spain. 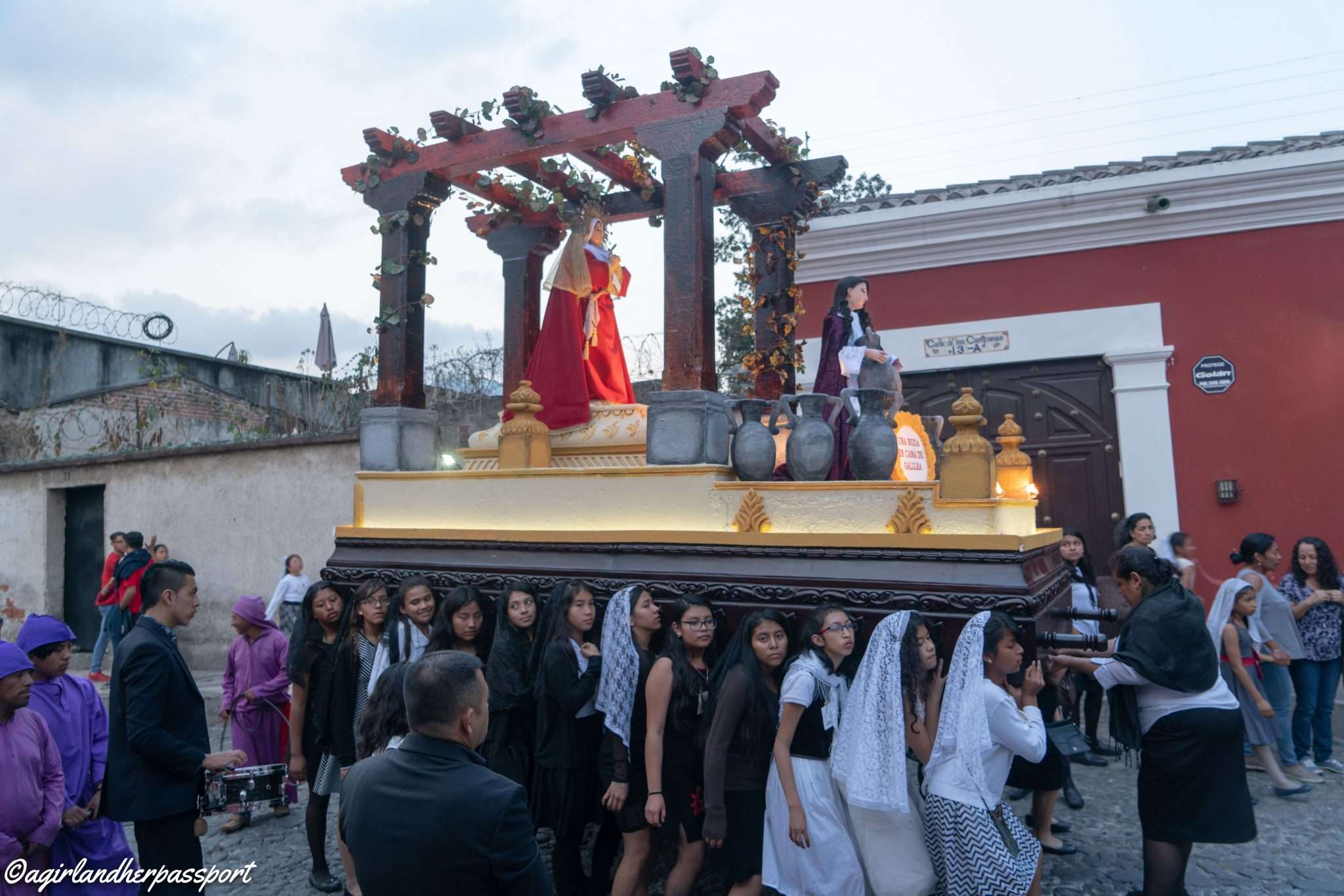 Before Semana Santa is Lent. You can tell the city is preparing for a massive celebration as activities begin before the Holy Week. The day I arrived there were processions. What I didn’t know at the time was that in the churches there were velaciónes (holy vigils) happening almost every day. The churches are elaborately decorated. Then there may be a procession from that day as well. During Lent, as many as 60 activities are happening around Antigua Guatemala. 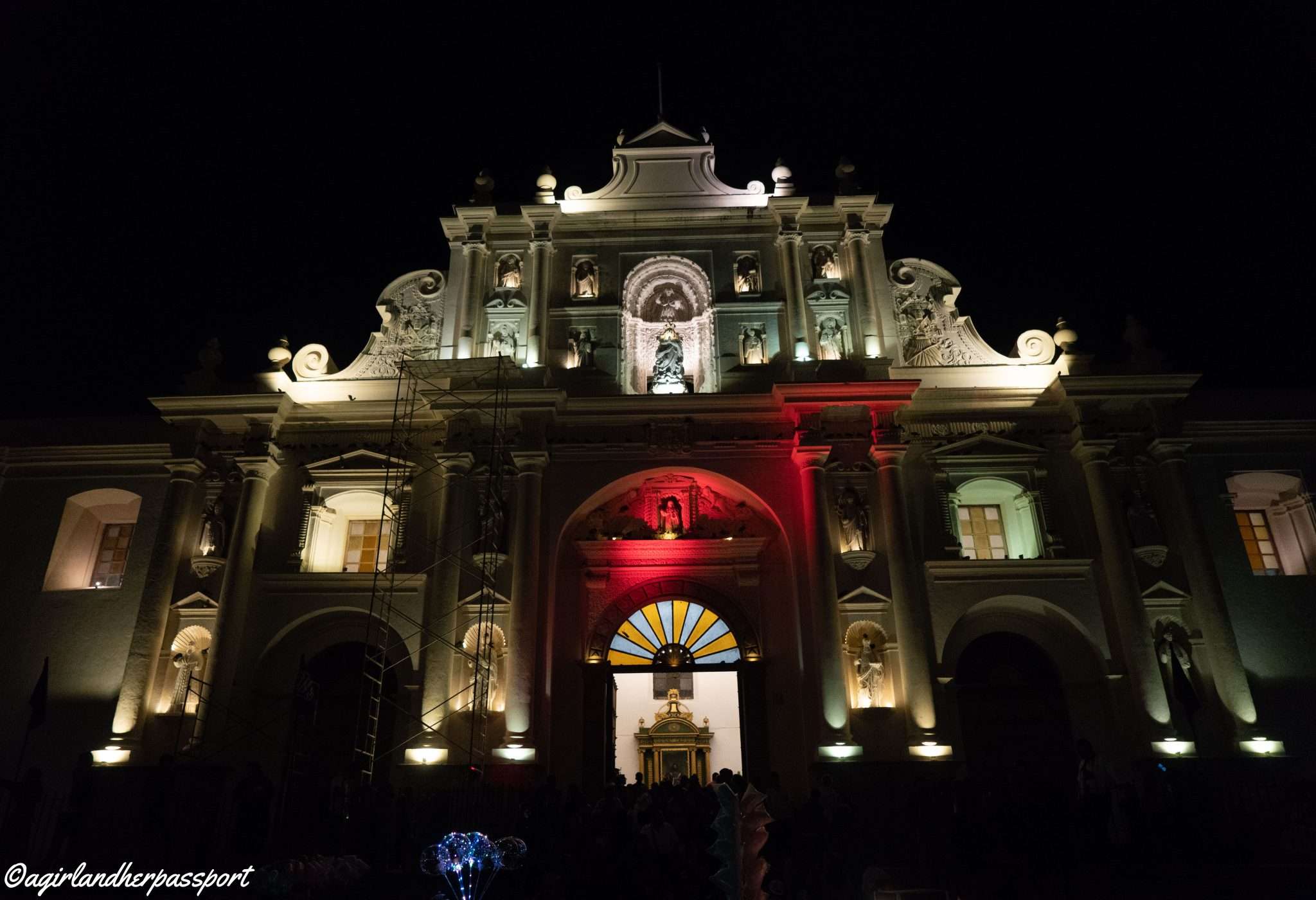 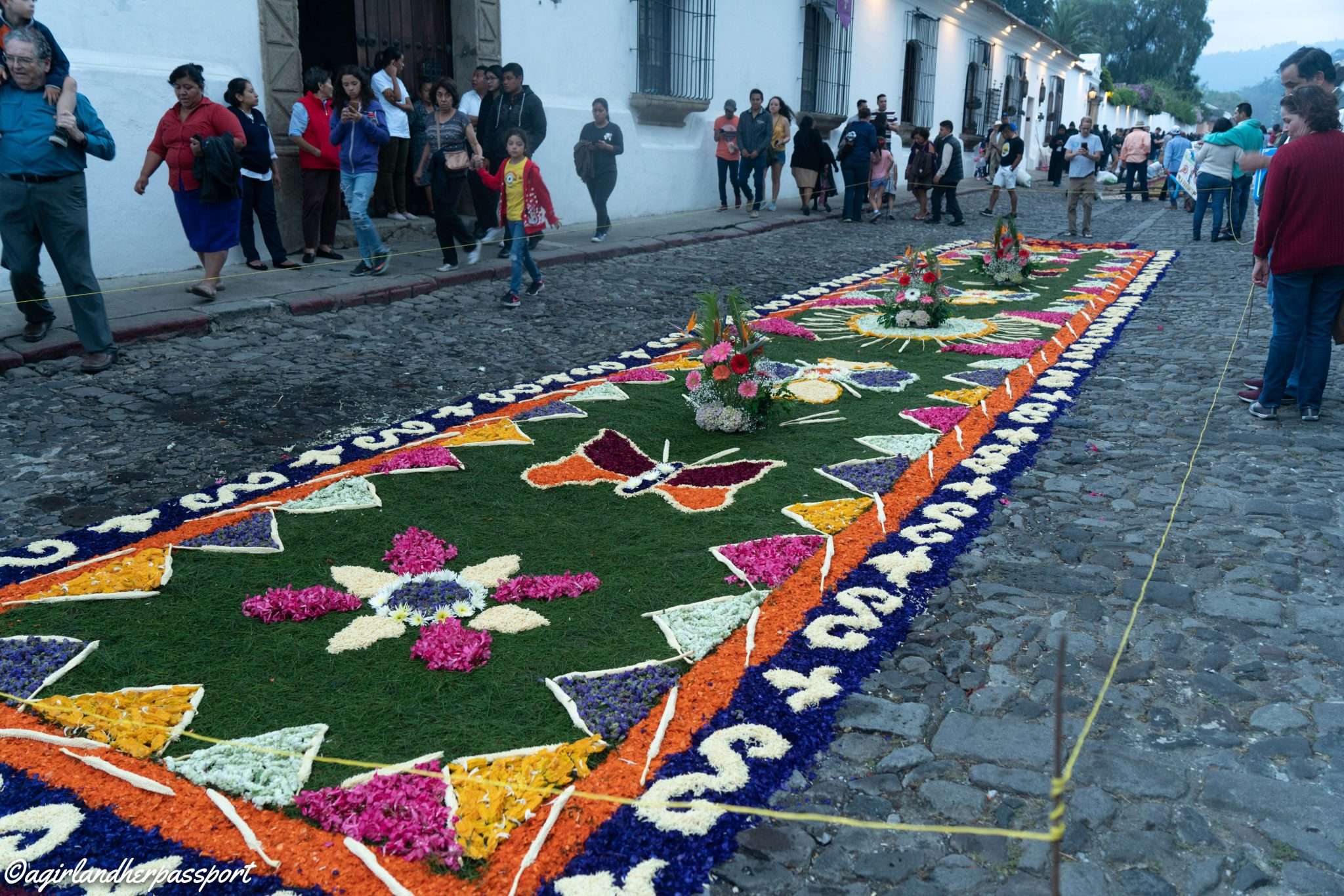 Before the processions, people and business come out to build elaborate alfombras or carpets. Some carpets are well planned and have extensive designs while others are more natural and spontaneous. I noticed many carpets being made with homemade stencils. Most of the carpets are made with sawdust that has been dyed into bright colors. Some carpets will have fruits and vegetables as decorations as well. I saw one that was three dimensional and featured Jesus and Mary. Jesus was made out of wood pellets. Not sure how walking over this worked though! During the making of the carpet, someone will spray the carpet with water to keep the sawdust from blowing away. 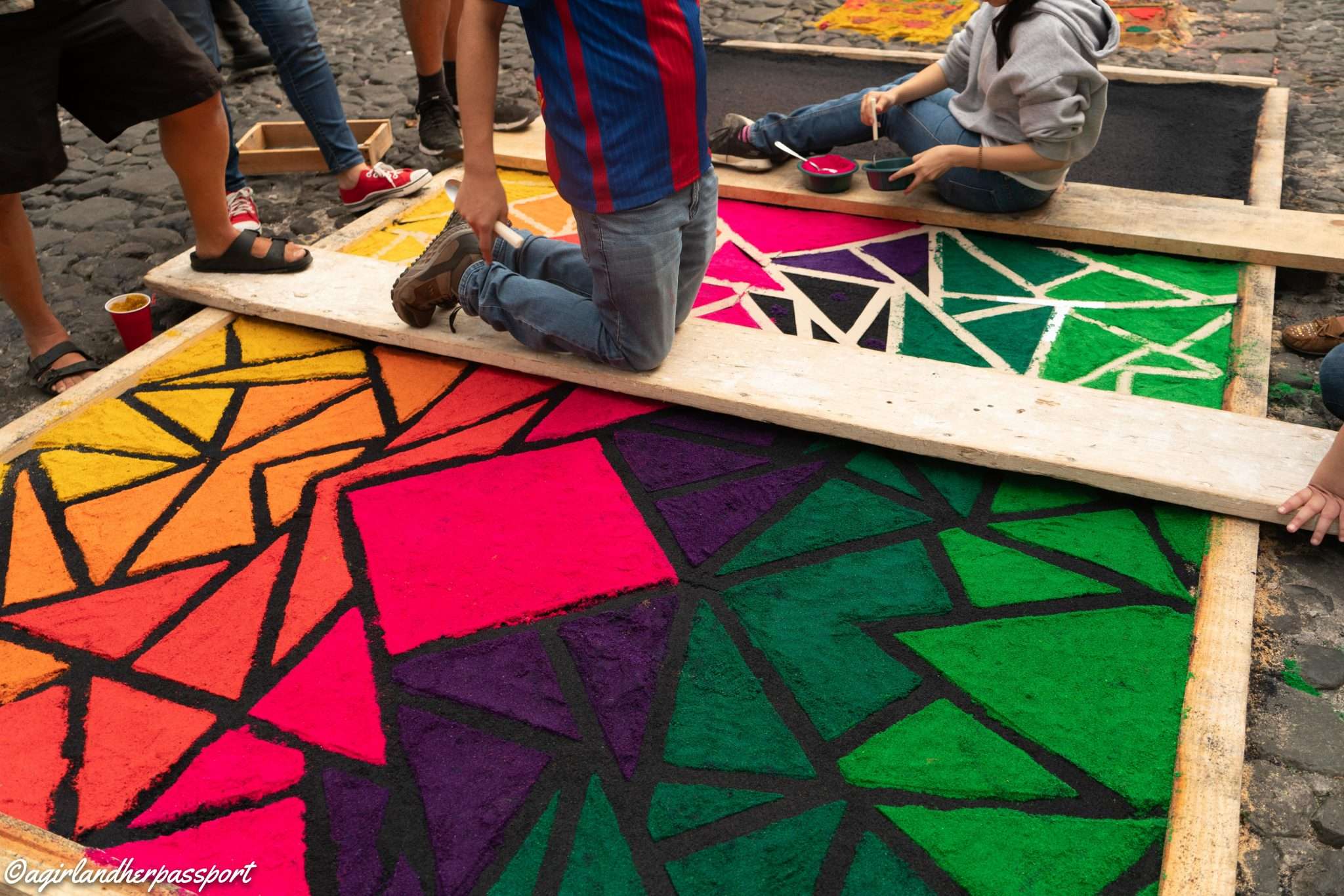 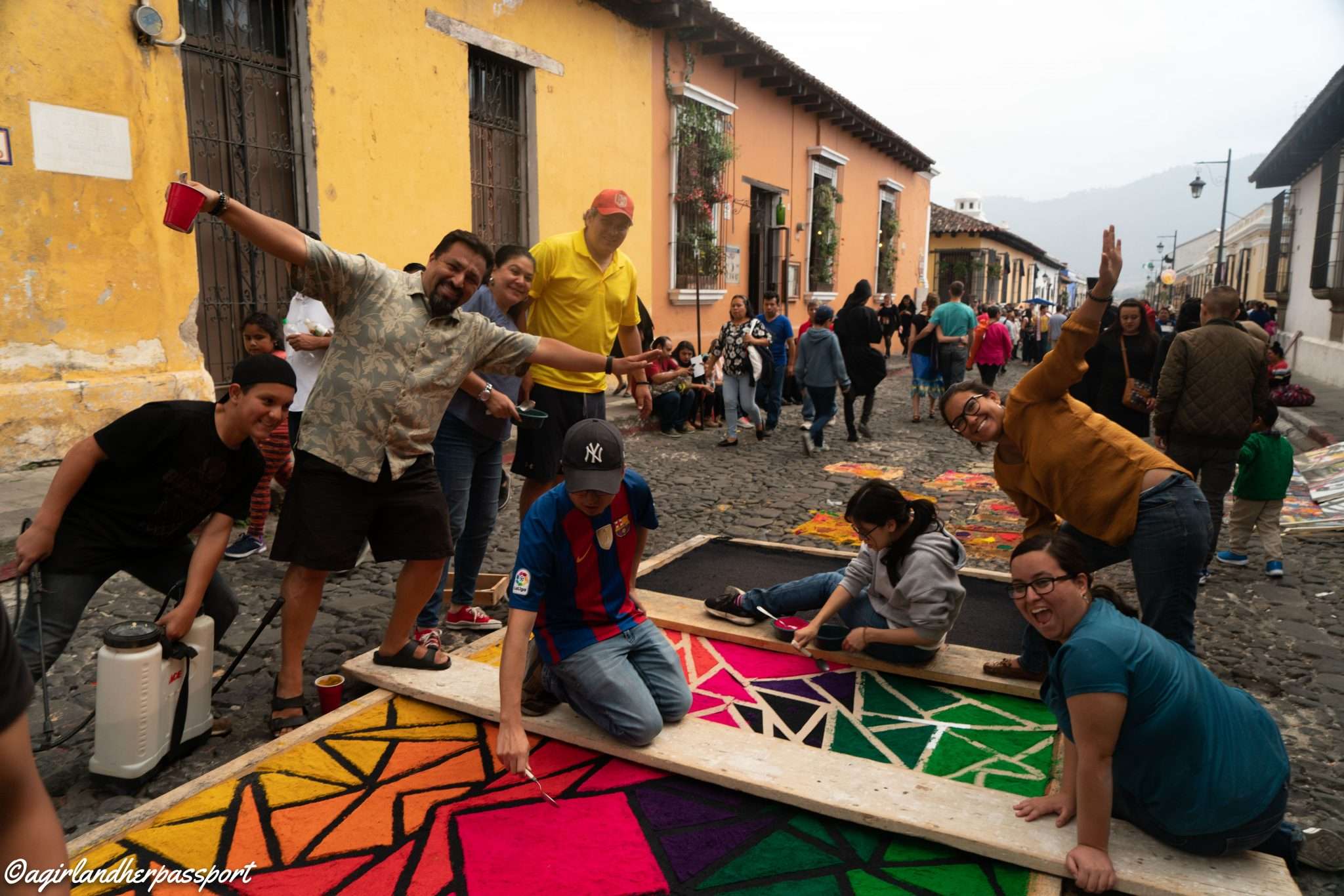 The carpets represent the sacrifice that Jesus made with his life. The carpets are deeply respected, and only the people carrying the andas (floats) walk on them. Watching people make them was moving as well. They spend hours and maybe all day making the carpet and then it is destroyed within minutes of the procession passing over it. The Alfombras, as a result, stay with Antigua for a few days after a procession despite the city’s best efforts to clean them, they litter the cracks between the cobblestone streets. 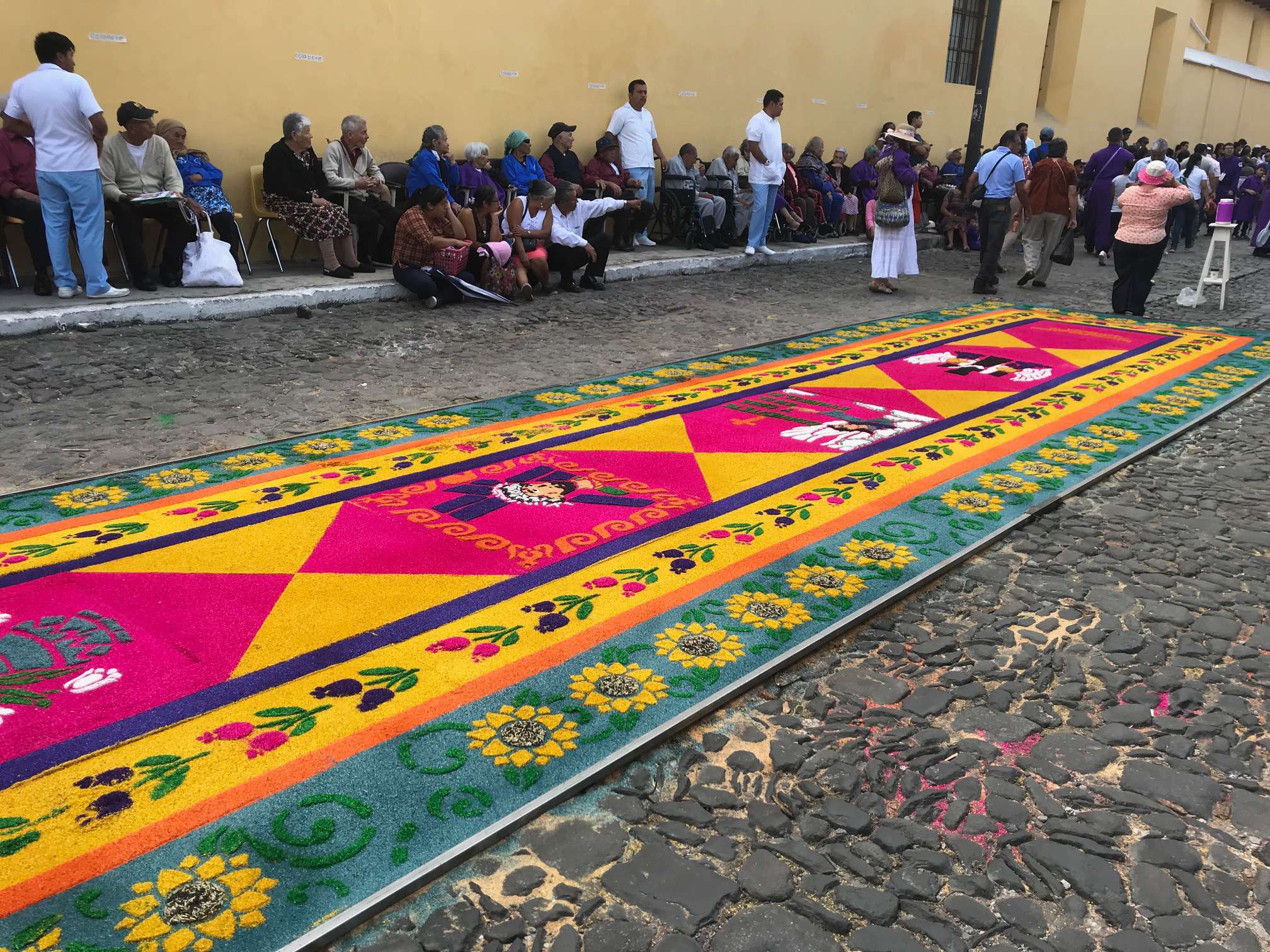 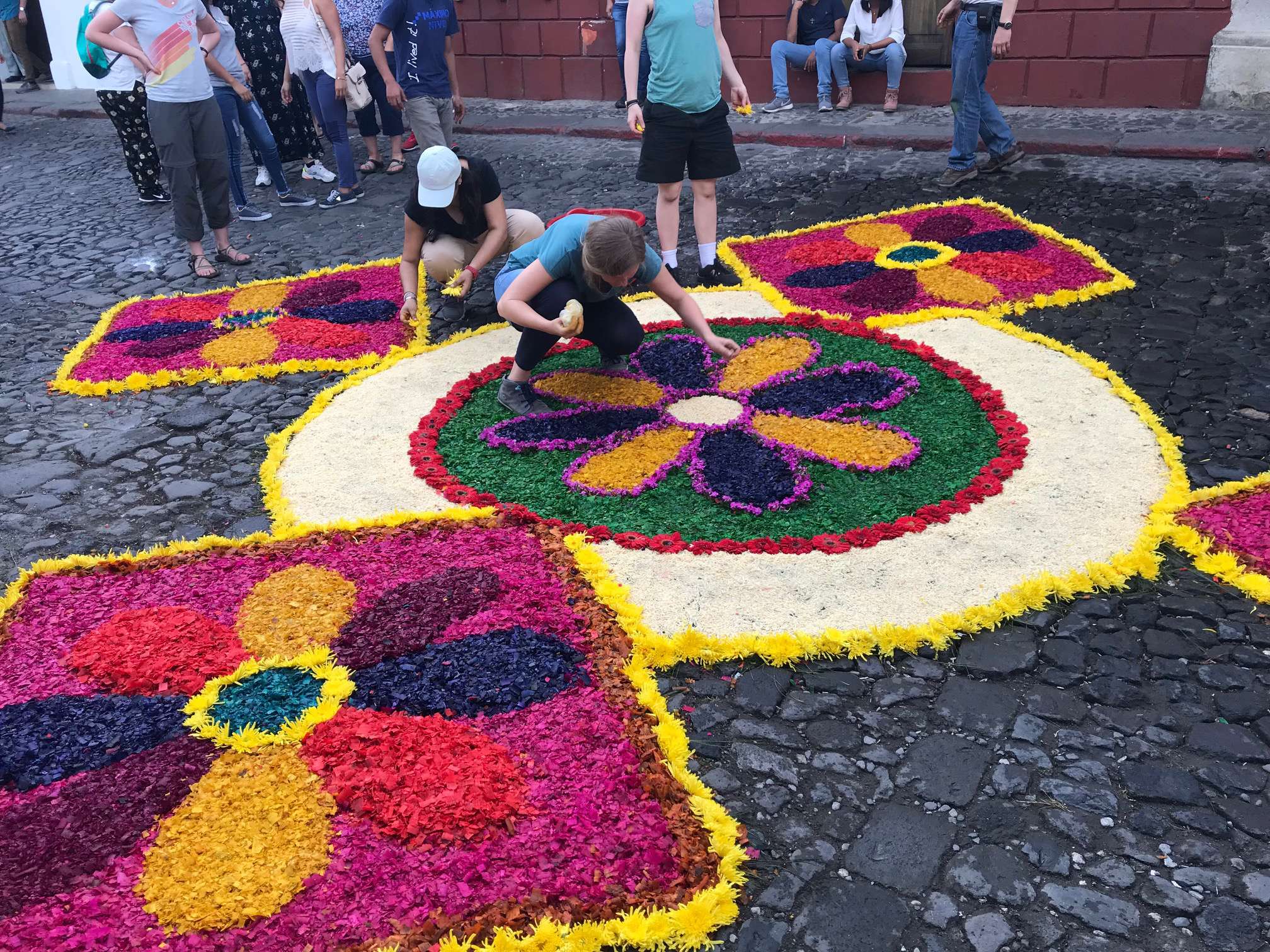 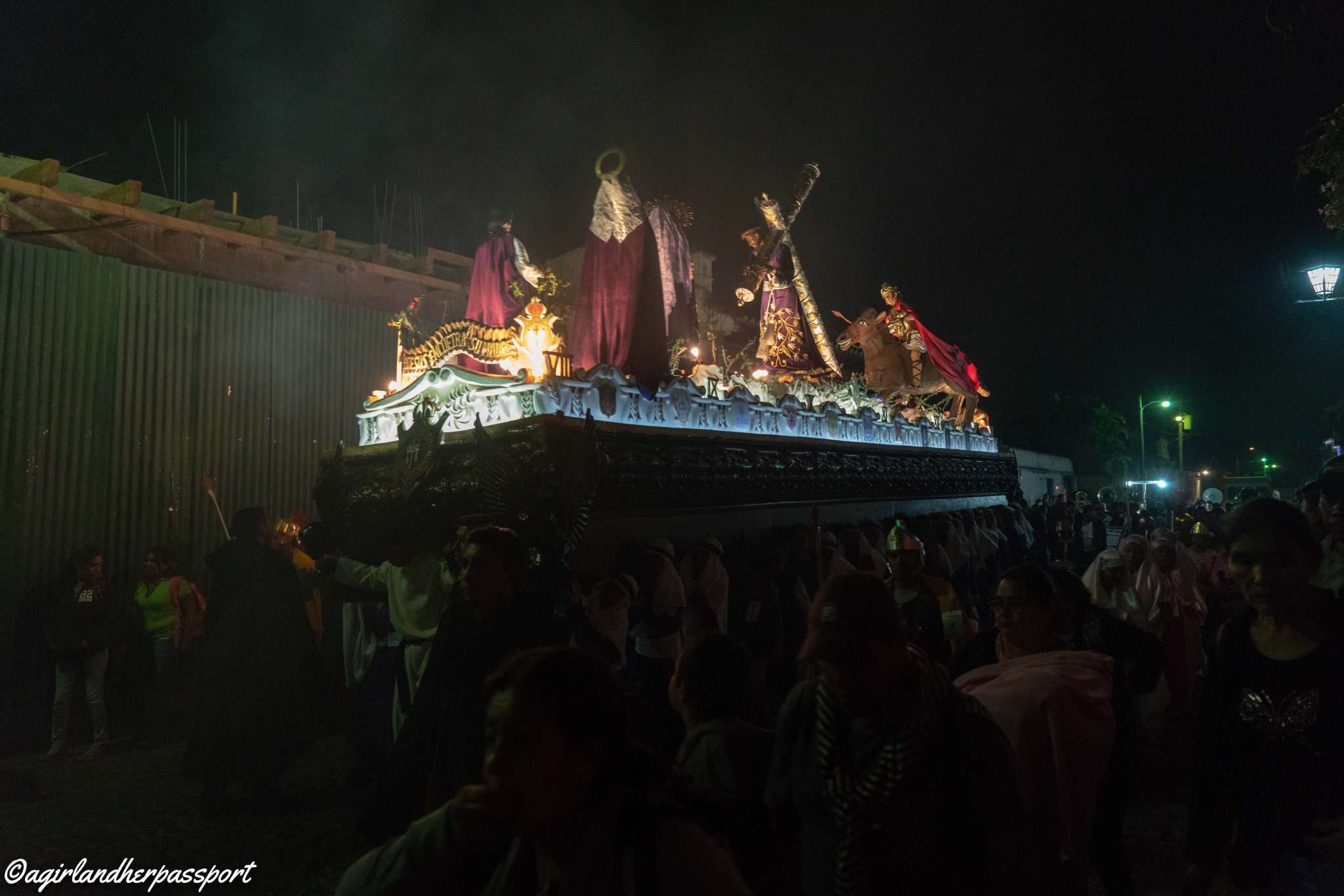 The Processions start early in the day, sometimes before dawn, and will go till late in the night. During that time, the andas are carried by cucuruchos and each block they take turns carrying the andas. Each andas can be as long as a bus so there are lots of people carrying them sometimes up to 80 men. The andas that feature Mary are carried by women. This doesn’t mean that the andas is smaller though! There is even procession for children. Depending on their age, they may carry the andas alone or with the help of adults. During Semana Santa, the robes they wear are purple until Good Friday when they become black. 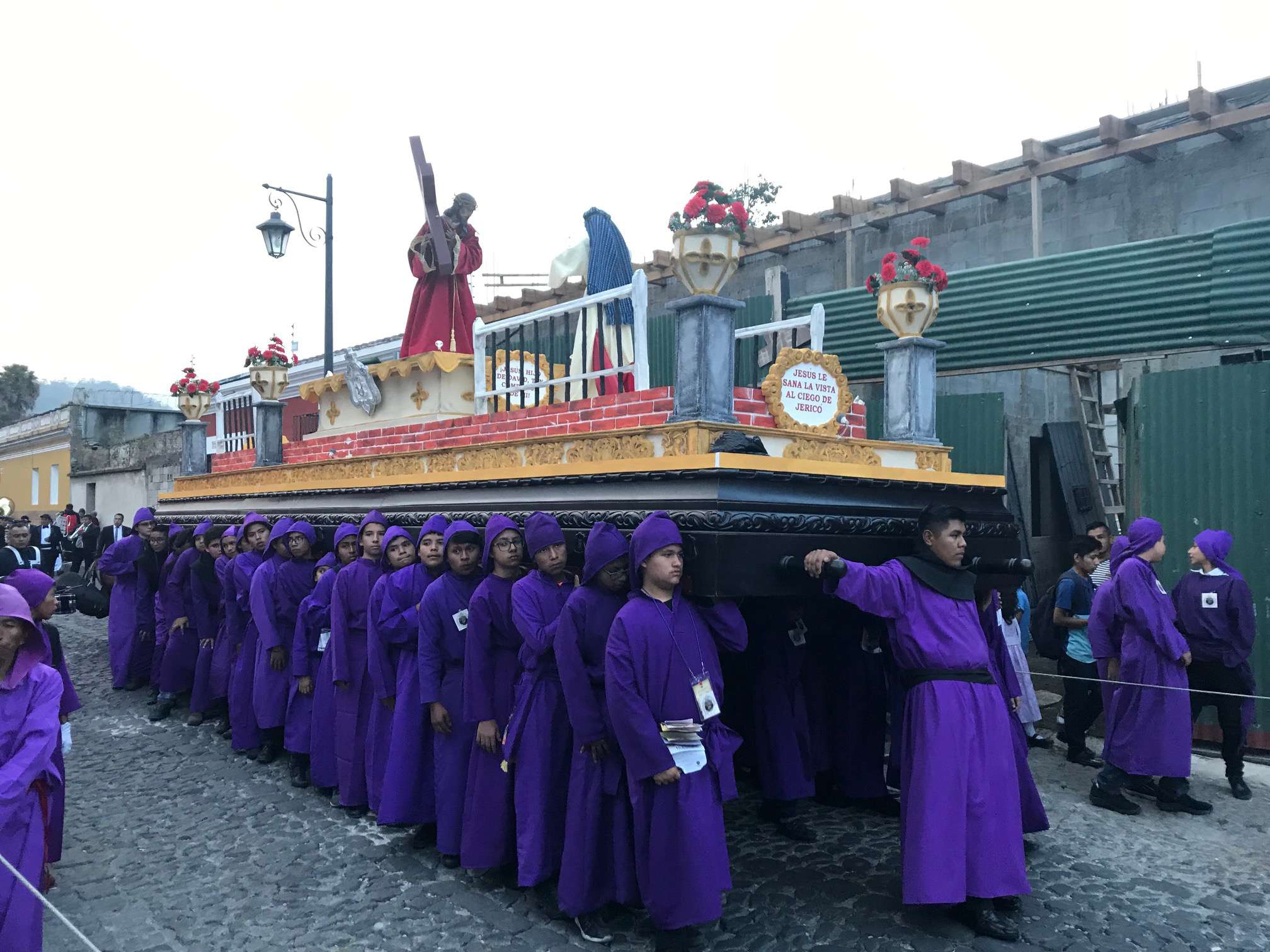 Following behind the andas is a funeral procession band. This band plays throughout the entire day. The mood is somber. People walk along with the procession either waiting their turn to carry the andas or to follow a family member. Behind the band is the bank. Each person participating in carrying the andas must pay for the privilege. Each block is 50 Queztals, which is about $6.50. However, you can only carry it once unless they run out of people near the end of the day. On important holy days, that is unlikely to happen. 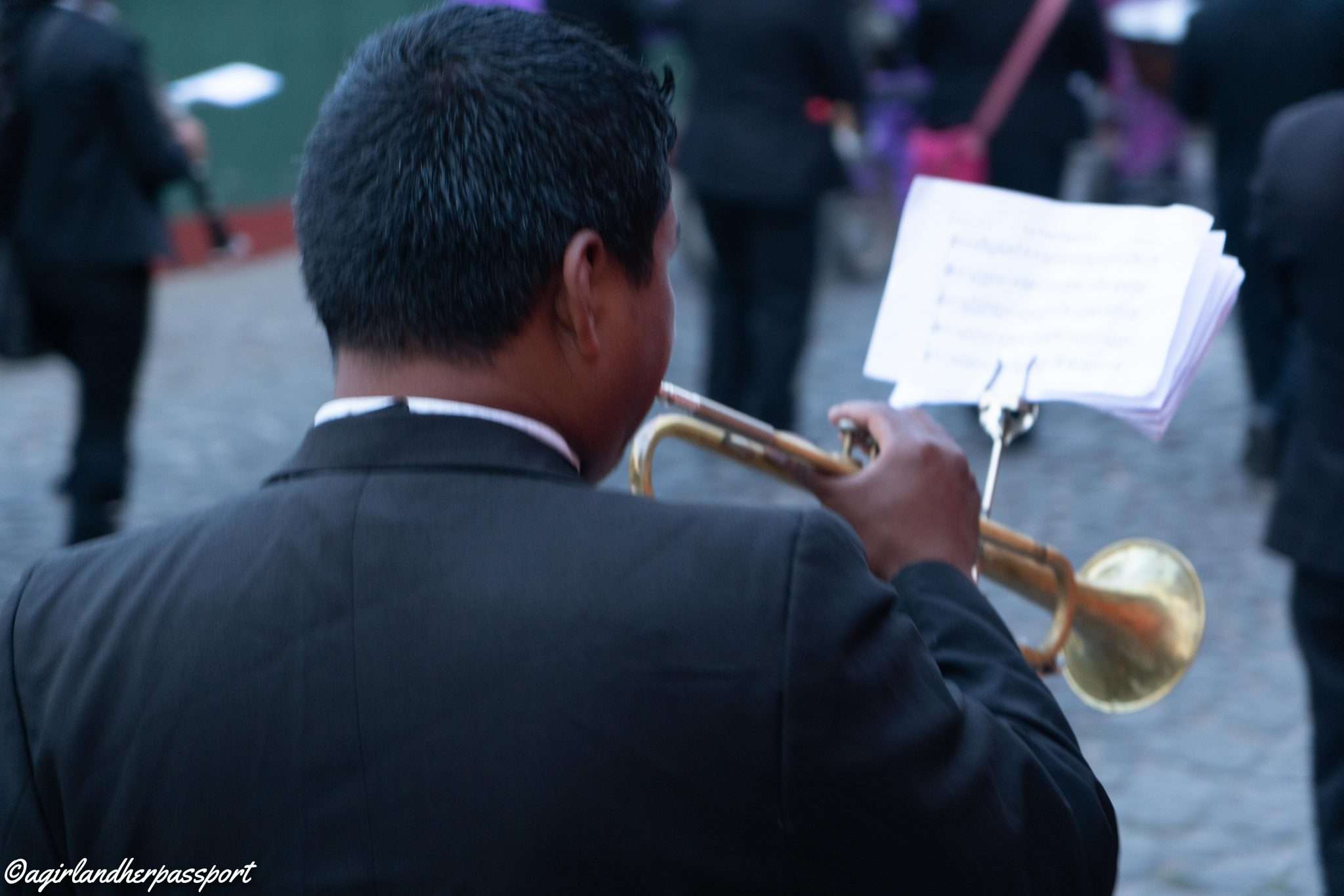 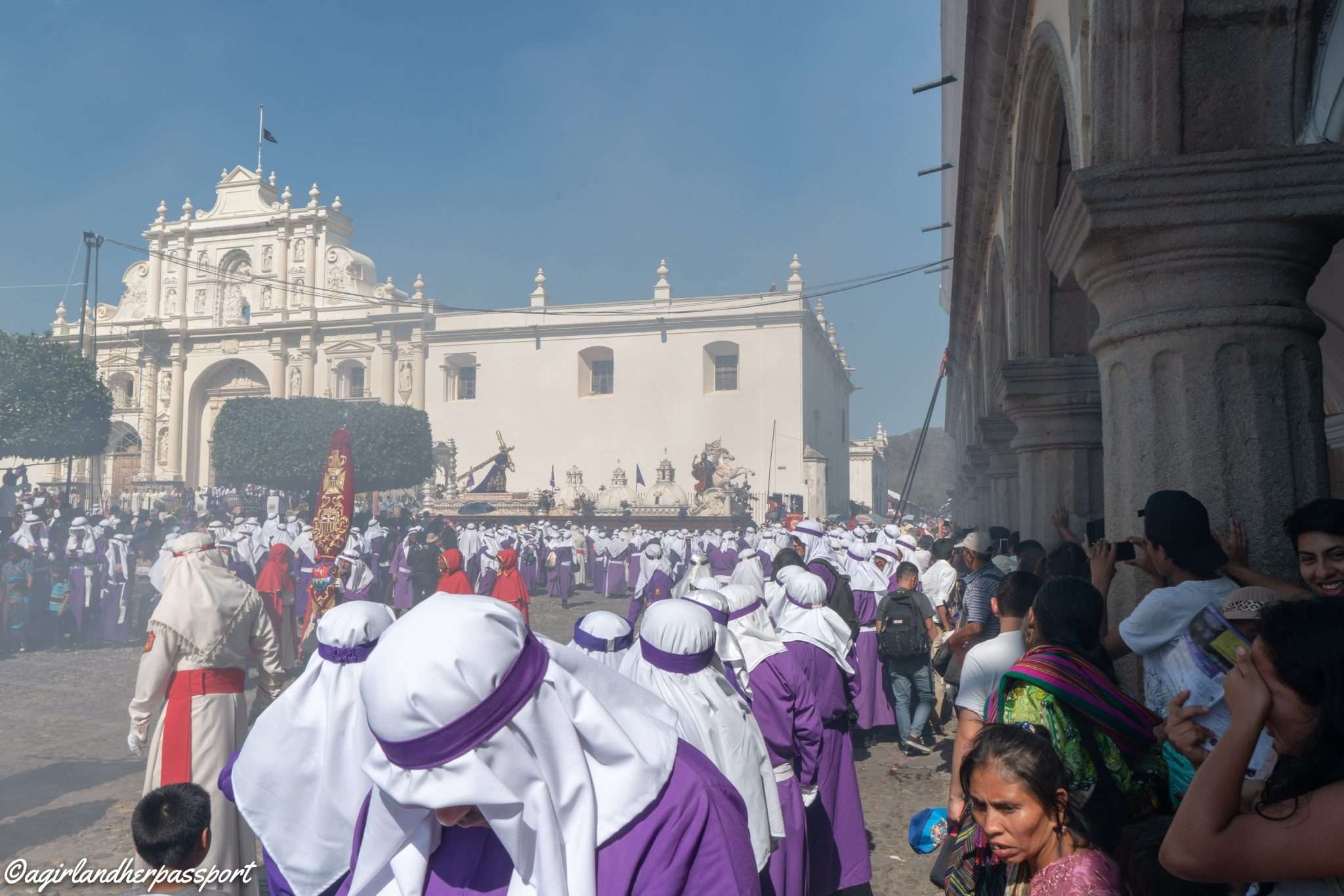 Surprisingly, Good Friday is the biggest day, not Easter. There are four processions on Good Friday. One procession starts at around 4 am and goes till the afternoon. This procession reenacts the crucifixion of Jesus. There are people playing Roman soldiers on horseback. The andas for this procession is one of the largest and most popular ones to carry. This procession was extremely moving for me personally. I think it was the dedication of faith that got to me. People here are much more rooted in their faith than we are in the United States. 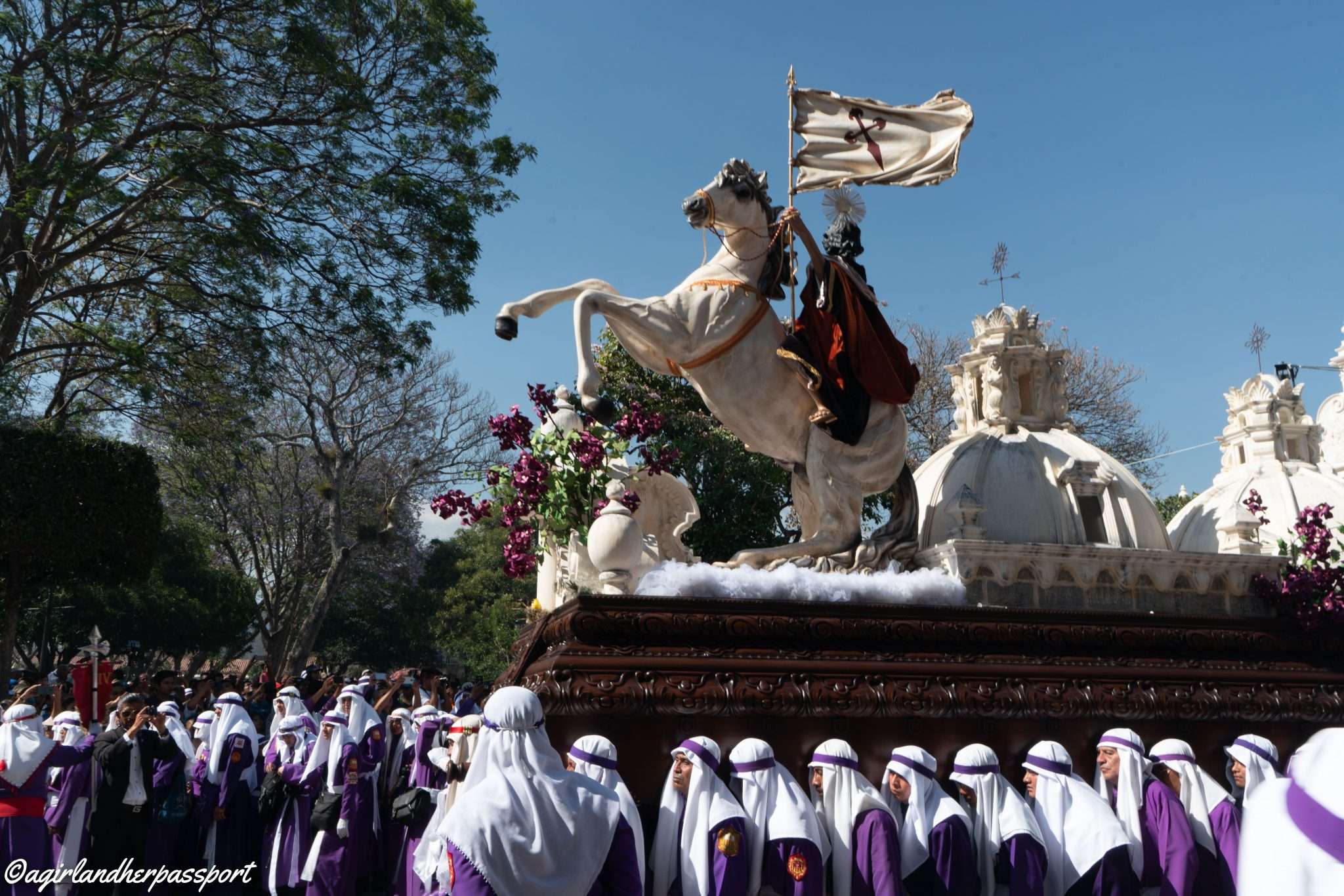 The rest of the procession started in the late afternoon. One of these featured Mary but was so popular, I couldn’t get close enough to observe the women carrying the andas. People seemed to be following this procession as I had a hard time getting close to each and each block I went to was full. Good Friday seemed to bring out the most elaborate alfombras of the week. One near the Arch in Antigua was so large you needed a drone to see the entire thing and it featured a woman backstrap weaving. 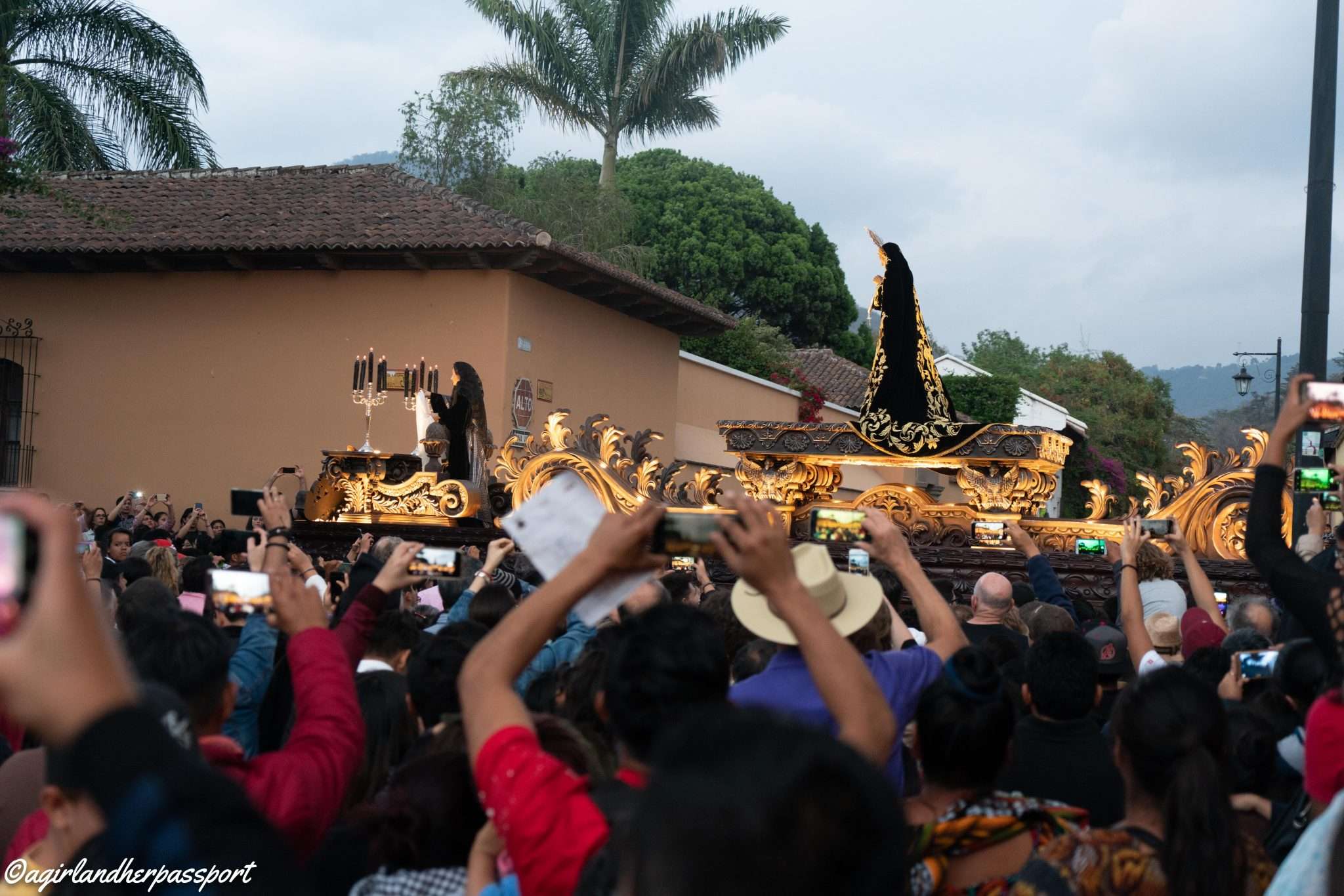 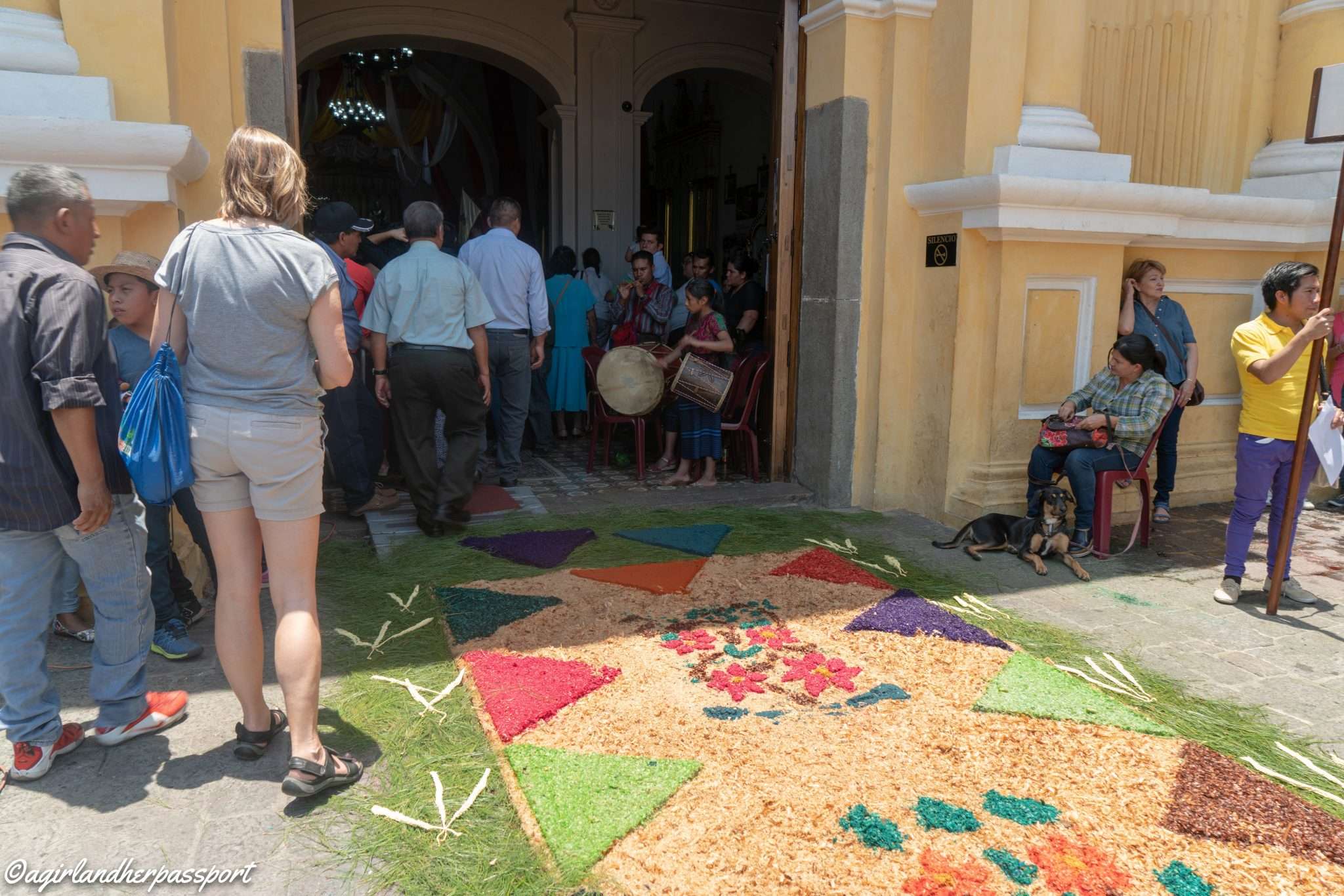 I was told that Easter Sunday was less busy and that it was quieter. Someone lied! Since Easter Sunday is the day that Jesus rose from the dead, the whole city comes out to celebrate. There are fireworks, drums and cannons. There are even more alfombras and processions this day. The cannons are constant and are shot off all over the city. The continuous loud noise discouraged me from getting out for most of the day. However, I did go see an alfombra near me that circle almost a whole block. People were so happy and you could feel that the mood in the Antigua Guatemala had changed. 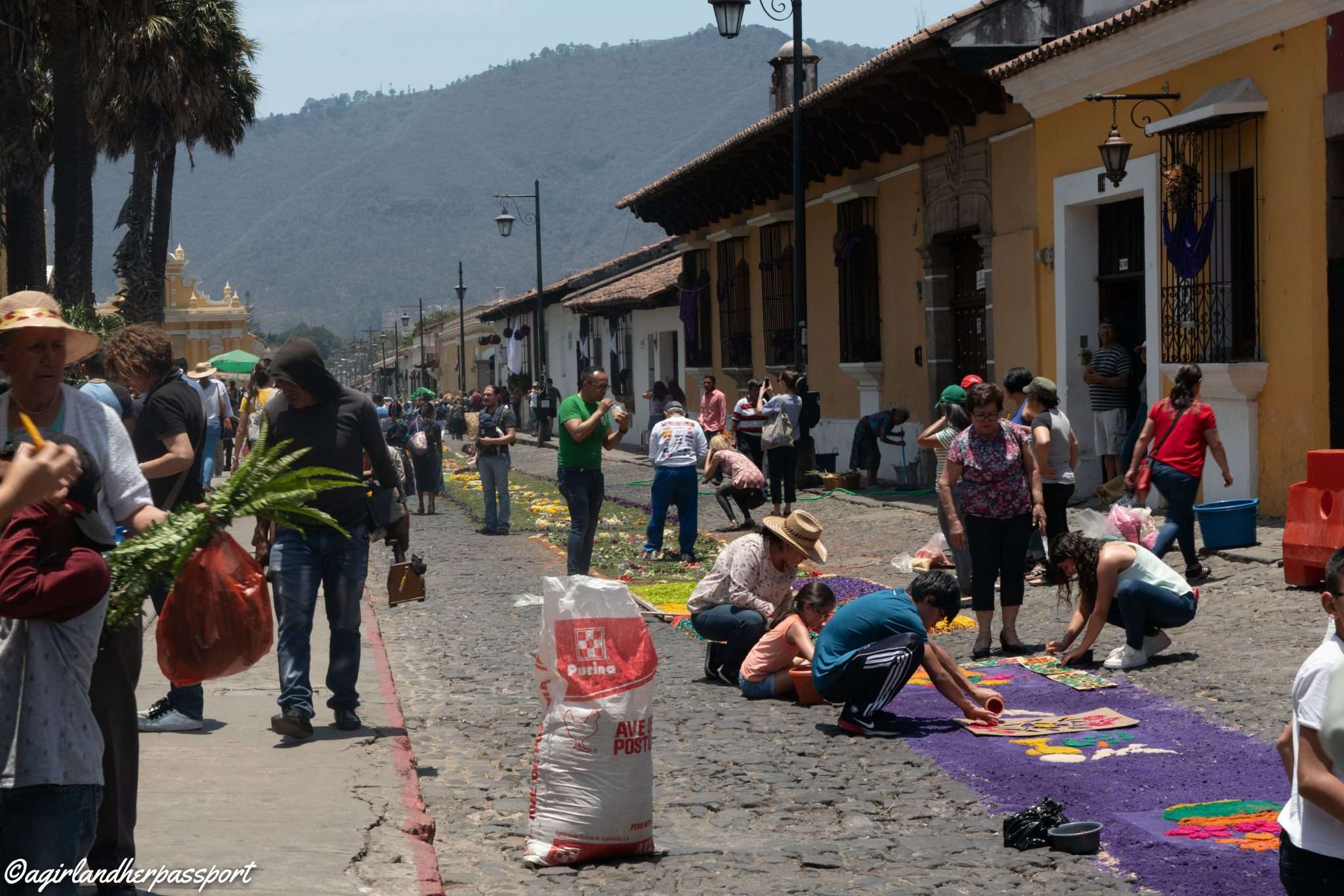 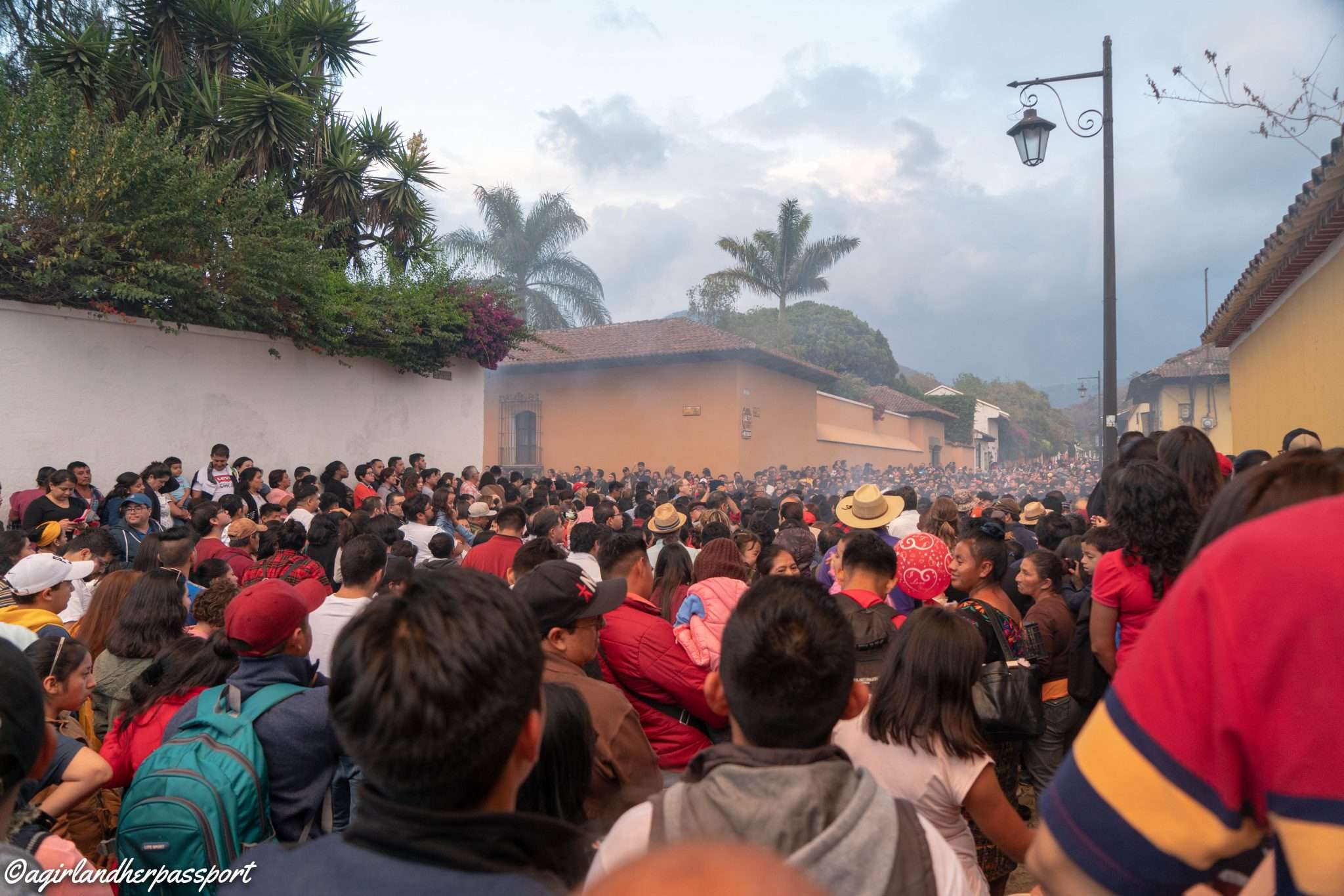 I purposely came to Antigua Guatemala during Semana Santa so I could see it. If you want to come, book your accommodation early! There are many hotels and hostels in the city, but the prices go up during Semana Santa and the rooms fill up fast. Expect large crowds, especially on the weekends and Good Friday. I would recommend coming during the week as the traffic getting into Antigua Guatemala on the weekends is really bad. Some shuttle services were only dropping people off outside the city and you had to walk in.

Depending on the time of year Easter occurs, the weather could be hot or a bit cool. Rain is a possibility as well so bring an umbrella. Wear closed-toed shoes and drink plenty of water. Patience is key not only for the crowds but waiting for the procession as well. Cell service was also terrible most of the week since so many people are in Antigua Guatemala. 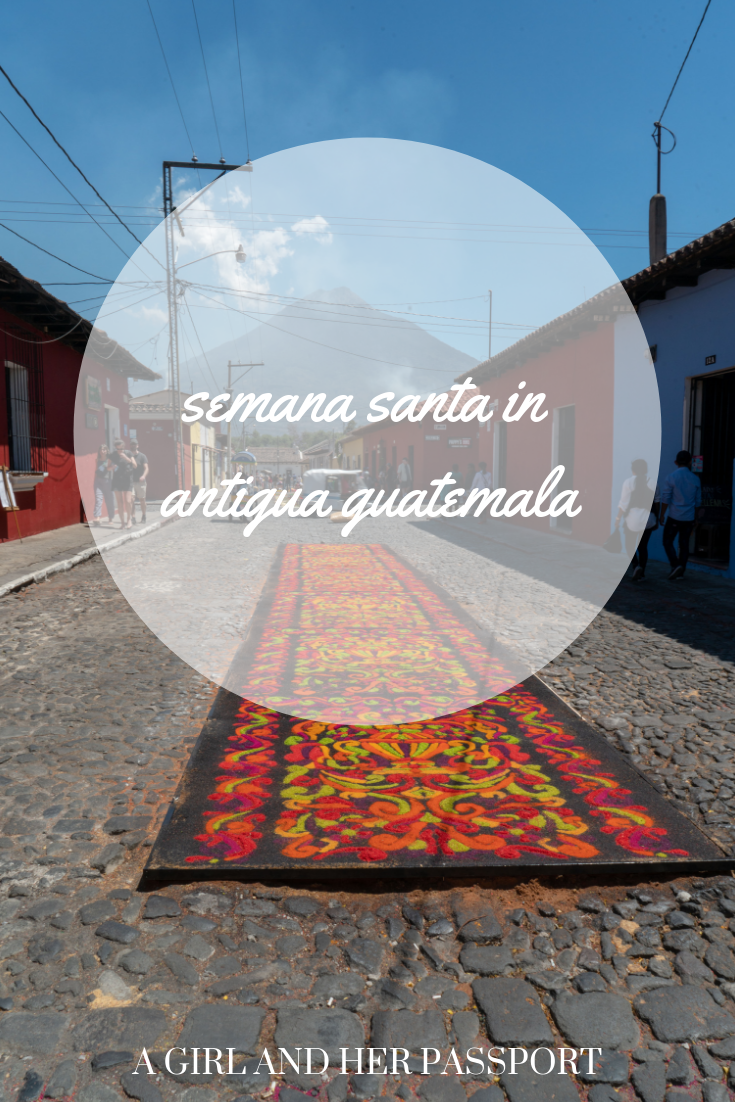 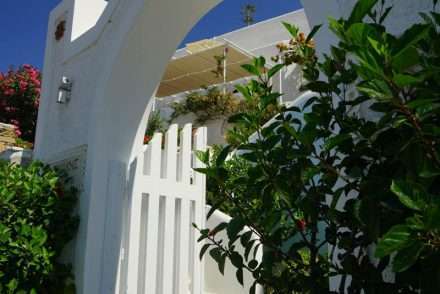 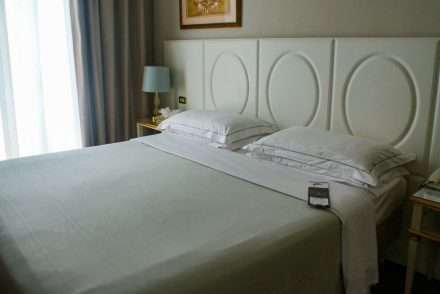 My First Week Working While Traveling