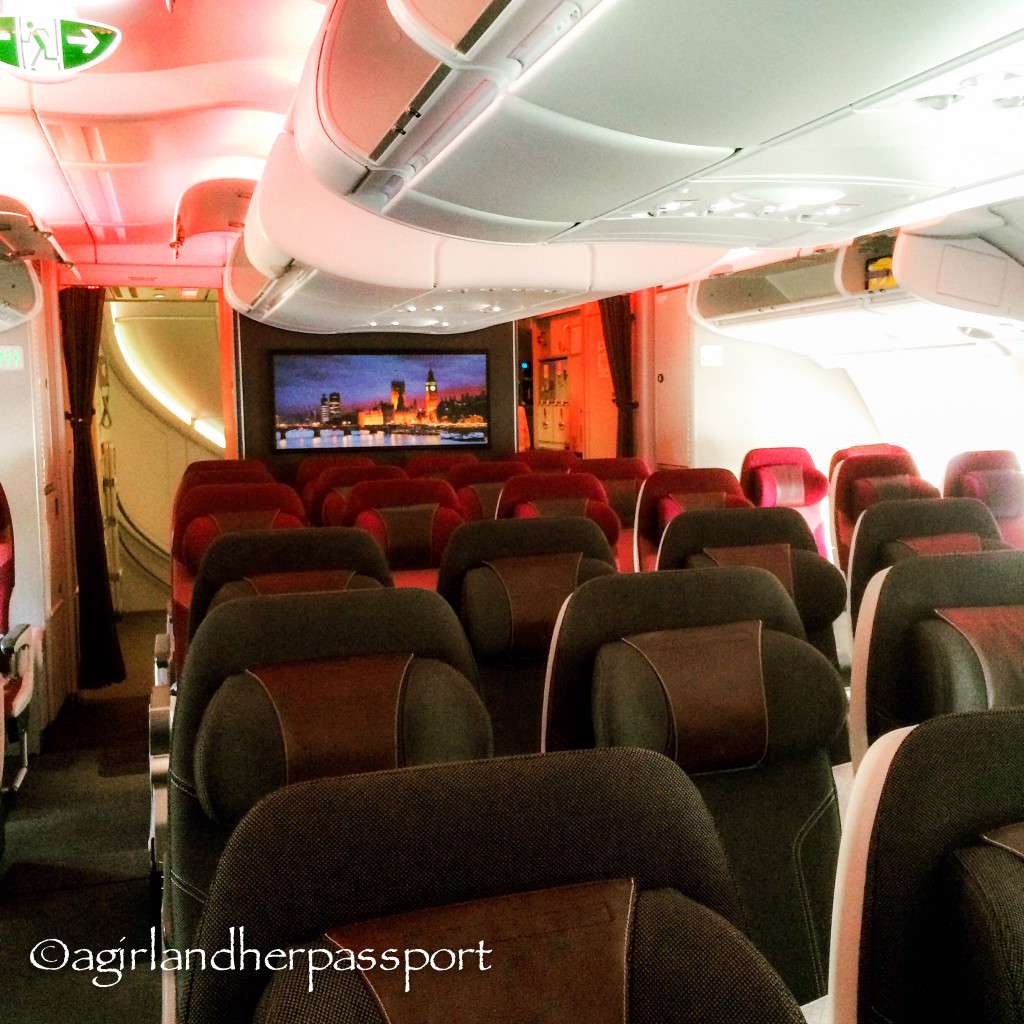 Okay, I don’t usually review airplanes, because well it’s an airplane! But this was a special treat for me. Since I moved to Qatar, I fly almost exclusively with Qatar Airways for several reasons. One is that they are in the One World Alliance and all my miles before moving here were with American Airlines. Second is that they have a direct flight to my hometown of Dallas. Third, my work uses them and I get to keep my miles that I earn flying for work. Last is the exceptional service and quality of a Qatar Airways. It didn’t take that long before I reached Gold Status with them, which equals Sapphire on One World.

What does this all have to do with a plane? The flight to Paris was on the fairly new A380, which is a double-decker plane. I have never flown on a plane so large! Not only that, but QA Privilege Club members are given priority to the upper deck. That meant me! I flew upstairs both going to Paris and on the return. 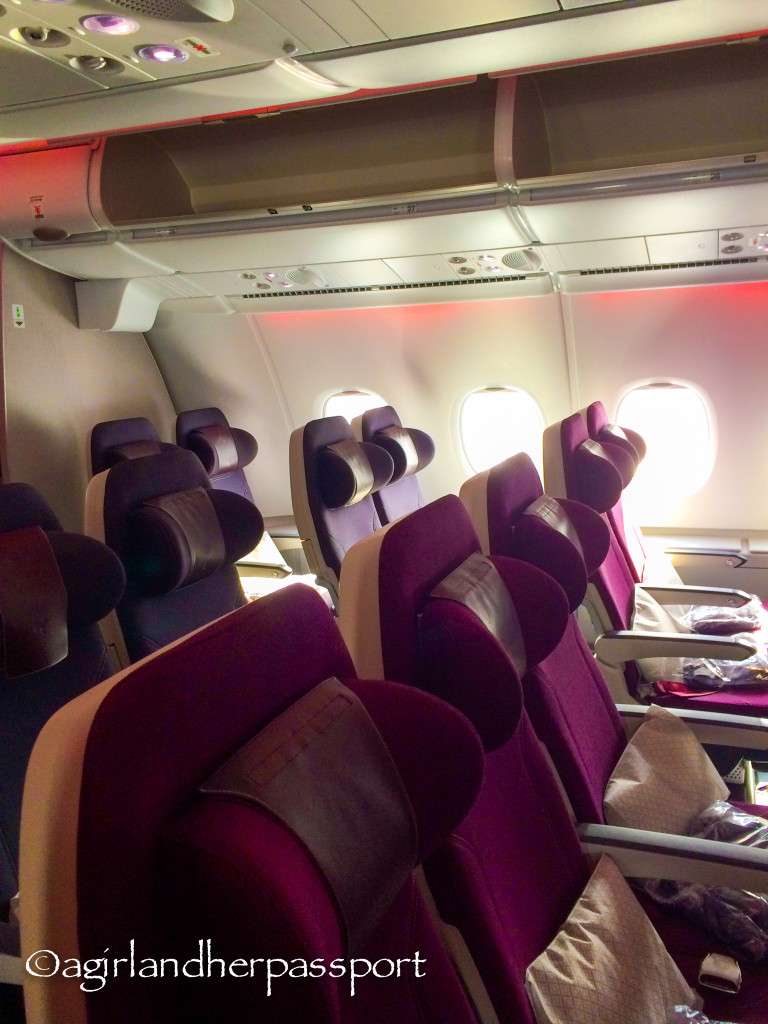 Overall the experience was amazing. There are a few cons, but first I will tell you the pros. I boarded and not to long after, they made the announcement informing the cabin crew that all passengers were on board. There couldn’t have been more than 8 people in the Upperdeck Economy section. This was true on the flight back as well. This meant I had four seats all to myself. This is especially great on an early morning flight with little sleep. I knew I was going to be able to lay down. Usually, it is an issue on Qatar Airways flights because the seat design on the other Qatar Airways planes do not allow for the armrests to go back fully and you have to shove yourself underneath it. Not on this plane, all the armrests went up and I laid down with all four pillows placed around me for extra comfort. 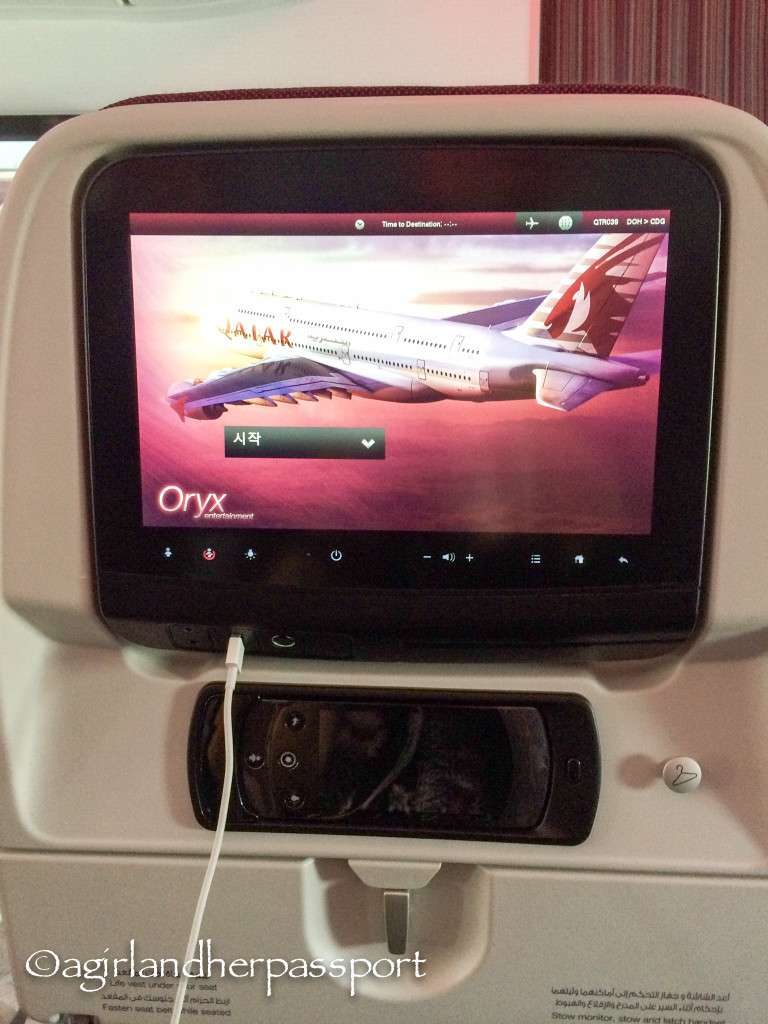 The onboard entertainment is always great on Qatar Airways. I loved that on the A380, the USB plug was located there and easy to find. You can use the remote or touch the screen. Since I had the row to myself, I turned all the others off so I could sleep. 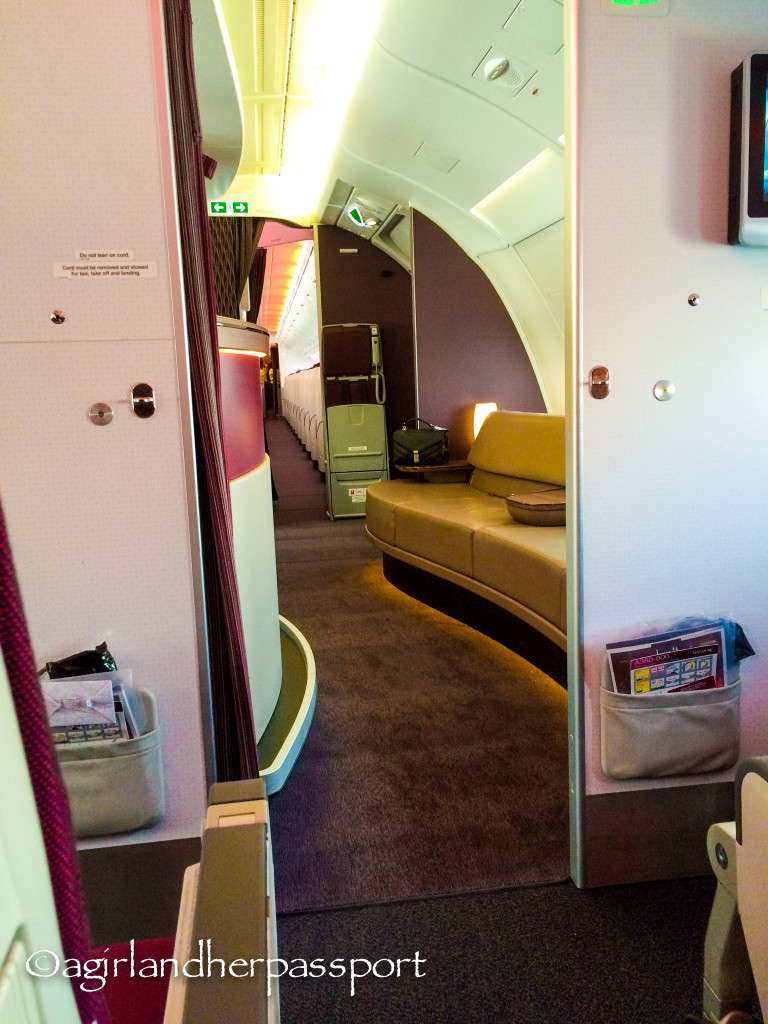 The view into the Premium Class lounge. I don’t think it got much use on either flight, which is a shame because I would have used it if I had been allowed! Look at all the room. I did sneak a peek after take off and it looks lovely and there were cupcakes! 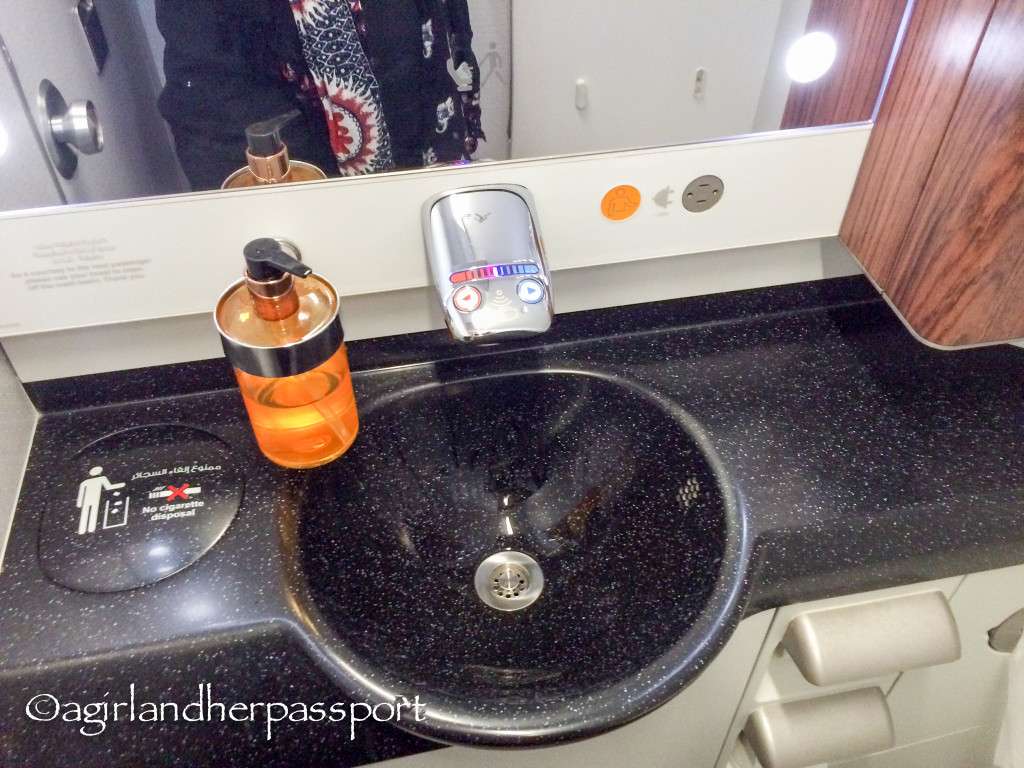 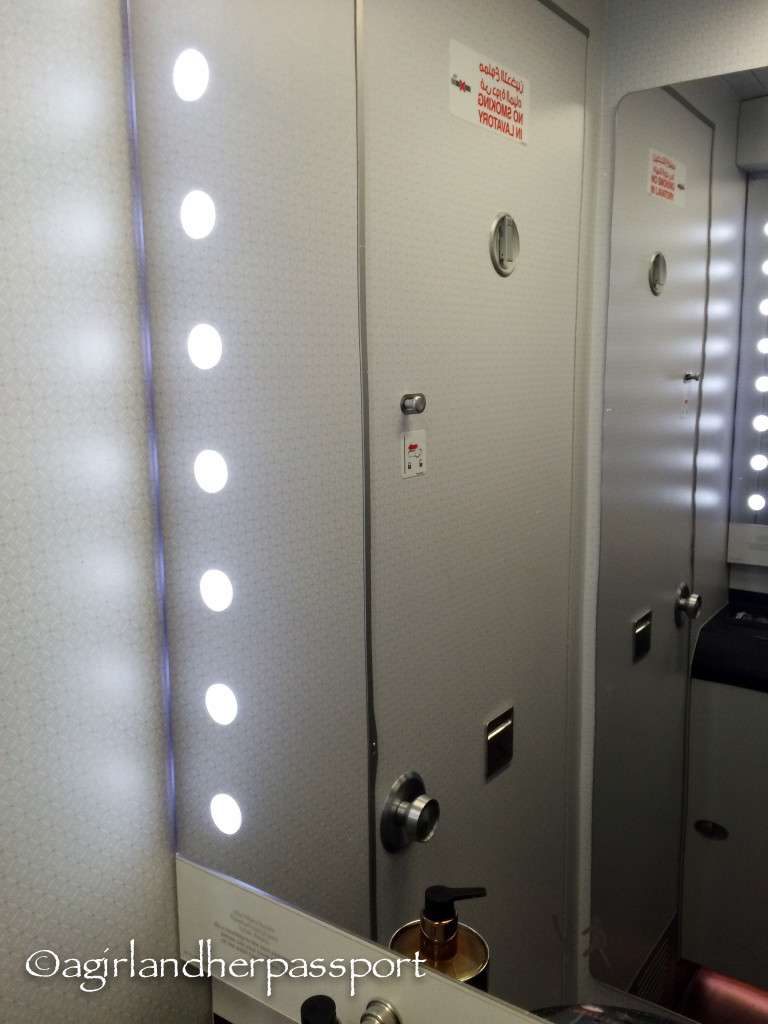 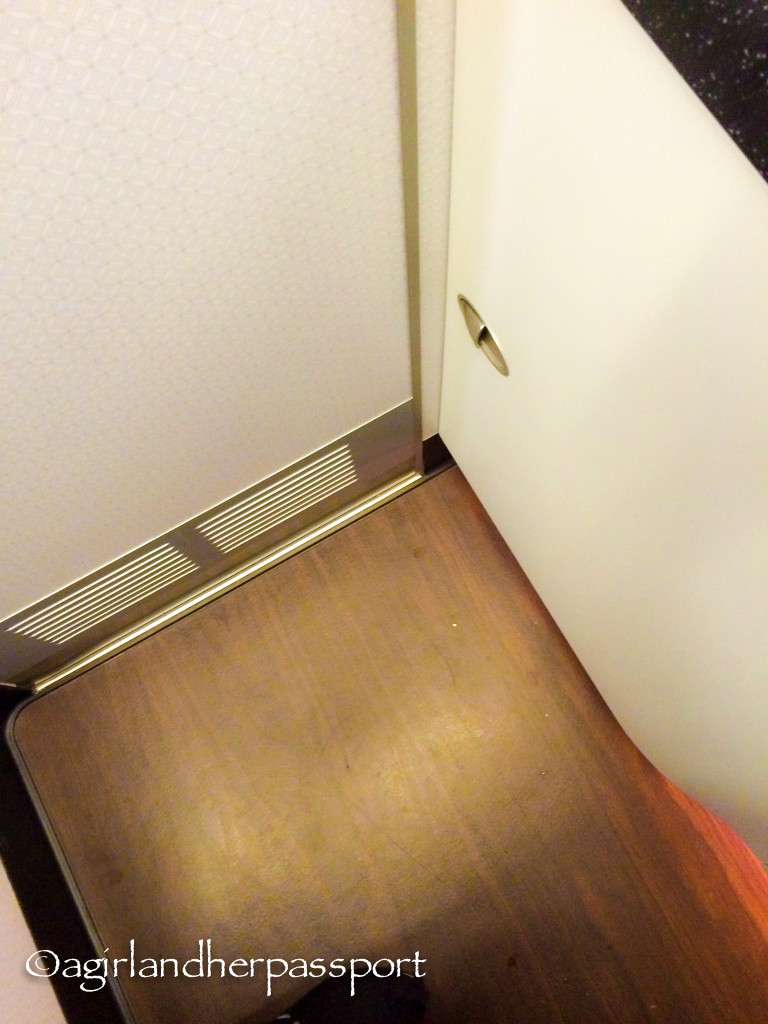 Yes, I posted pictures of the bathroom! It was the nicest Economy Class bathrooms I have seen on a plane. The lighting was actually flattering and there were faux hardwood floors. The best thing is that you are sharing two bathrooms with a lot fewer people than downstairs. 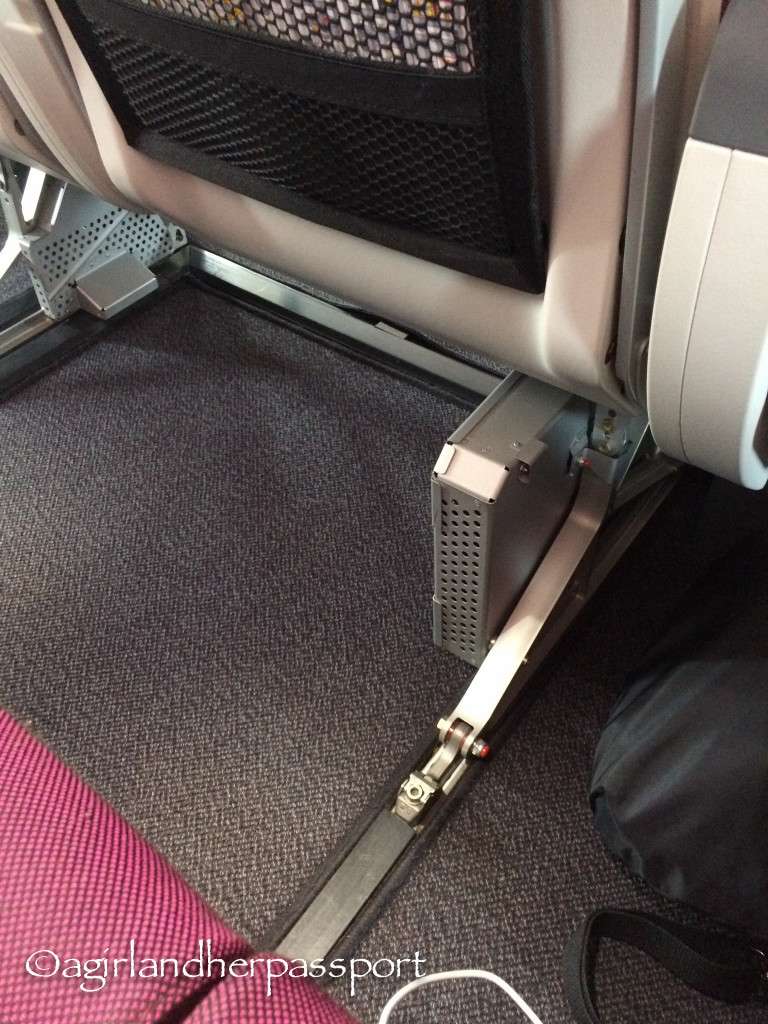 On to the cons. First was the fact that the in-flight entertainment system box is still under some of the seats. The have eliminated this on some of their planes, so I am not sure why it is still on this new plane. It was under my seat, 26G and 26E and F, which E and F had an advantage as there is no middle seat bar under the seats there. Not a big deal on either flight since I had the whole row. However, I changed my seat on the way back just in case to 26D that did not have it.

The other con was boarding and disembarking from the upper deck. For boarding, you have to enter through the lower-deck and then climb the stairs. This might be an issue if you have a heavy carry-on. You are also the last passengers to disembark. You have to wait for the First and Business Class passengers to leave and you can’t go downstairs to disembark. This was the case in both Paris and Doha.

The plane overall is great and I would love to fly it again. It’s too bad it isn’t used on many routes. Right now it only flies to Paris, London and Bangkok. Come on Qatar Airways, make Dallas one of the routes. 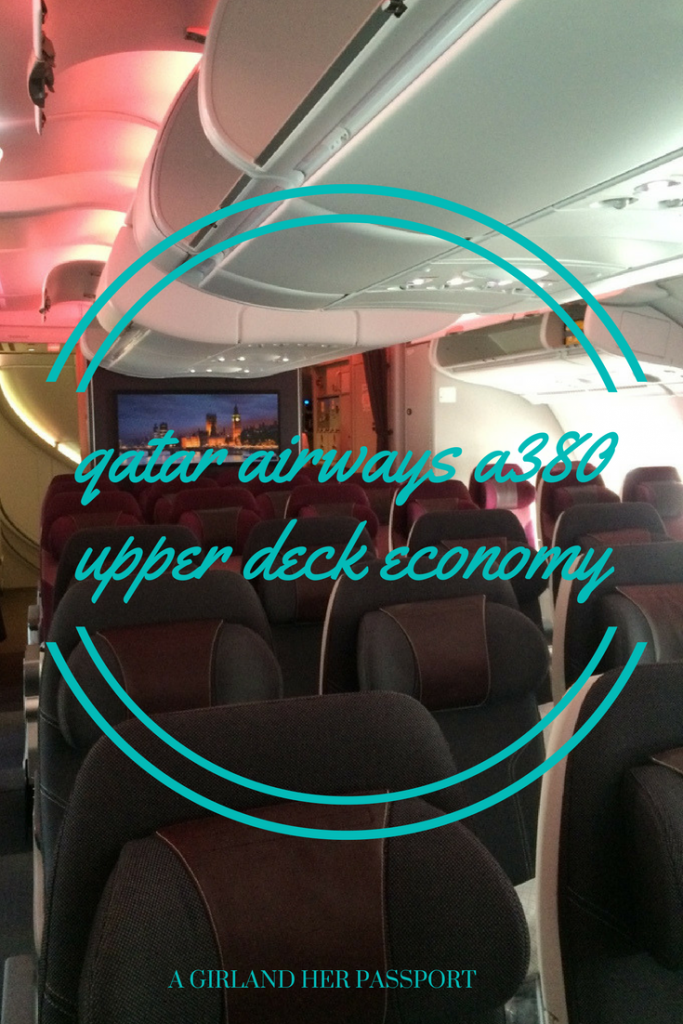 My First Week Working While Traveling

The Beautiful French Countryside in Giverny