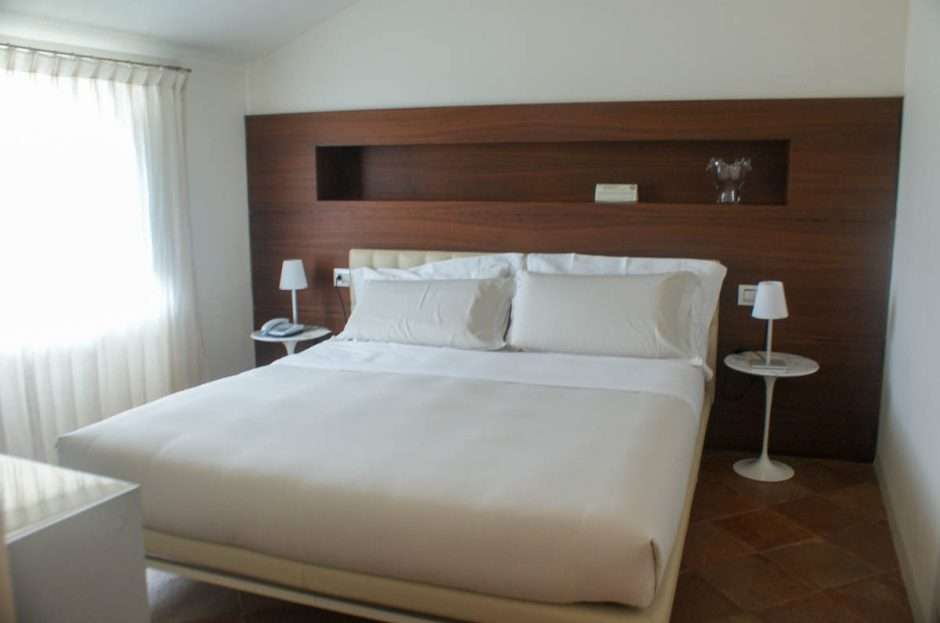 Nothing will catch my attention faster than the word museum being in the name of a hotel. Sitting in Gubbio, Italy, I was planning where to sleep for the night. I was having a tough time deciding between staying Gubbio or heading to Assisi, Italy. In an unusual manner, I had not booked a hotel for the night or even decided if I was going to stay away from my apartment in Umbria. After searching for hotels in Gubbio and deciding that the one I wanted wasn’t available, I moved on to Assisi.

Choosing to sleep in Assisi might have been the best hotel choice I have ever made in my life! As I said, I was caught by the word museum in the name of the hotel and the gorgeous photos of the spa. To be honest, I don’t think I looked at pictures of the rooms at all. And normally I do some kind of research on the hotel, but I only read the TripAdvisor reviews and booked the Nun Assisi Relais & Spa Museum! The hotel looked stunning on my tiny iPhone 5, and that was enough for me. Only later did I discover it was a 13th-century monastery for Benedictine nuns.

When I arrived, I did not think my room would be ready as I had only booked the room about two hours before. However, my room was ready, and they never let on if my last minute reservation was stressful. I had gone to the wrong entrance when I arrived, and my bag had been left at the spa entrance. While I was waiting for my bag to be brought up, I was offered a drink while I waited. During that time, they took my bag directly to my room, which was great since there is no elevator in the Nun Assisi Relais.

My room was room 12. Each room is different, and there are only 18 in total. Entering through a small double door, I walked into a small sitting area with the television. The seating options were a bench area and one lounge chair with a footstool. From the lounge area, you walk down a hallway to the bedroom. Along the way, you pass the closet and bathroom. The closet is a walk-in and is larger than almost every closet I have ever had! The bathroom is not large but has a wonderful rainfall shower and shower gel that smelled so good I brought it back to Doha with me. My only complaint about the bathroom was the mirror was up so high that I could only see my forehead.

The bedroom contained a large and very comfortable bed. There was also a television in there. Once I laid down on the bed, I realized I had a stunning view of the Rocca Maggiore. The view was even better as the sunset. The room had air conditioning, but it was not what most Americans are used to, but I wasn’t hot through the night as I thought I would be. I discovered the reason why in the morning, linen sheets! I wanted to take them off the bed and bring them home with me.

Want to sleep on these linen sheets, check rates here.

Once I arrived, I decided that I was in need of a massage from all the walking I had been doing all over Italy. I booked a massage for later in the day so I could still sightsee during the day. I was told to put on the robe in my room and go down to the spa a few minutes before my appointment.  Since I was going for a massage, I didn’t take my camera, which was a mistake. This is also where the museum portion comes into play. The spa is in the ruins of a Roman amphitheater. The space is gorgeous and immediately calming. Despite my wanting to explore the whole space, I had to go directly to my treatment.

The massage is one of the best I have had in my life. Unlike in the US, you lay on the table without a towel. I am assuming it is because Italians are less concerned about nudity than us Americans. It didn’t matter though as the table was heated and the massage therapist made me feel comfortable. It was a rough massage, but I felt so relaxed, I almost fell asleep. What I also liked is that the room was dark, there was relaxing music playing, and the massage therapist did not talk much.

There is also the option to do the Nun Circuit, which is entering several different rooms of different temperatures. It is supposed to bring immediate purifying and regenerating effects. There is also a multi-massage pool. All of this is just an excuse to go back since I wasn’t able to do any of this because I had a reservation at the restaurant.

While Assisi is awash with ancient structures, Eat Out is thoroughly modern inside. The interior is clean and simple with neutral tones and dark wood. Some of the kitchen is open plan, so you can see the chefs working.

The menu changes with the season. Much of the ingredients are sourced locally and are organic. The portions are not large; the food is not complex but flavorful. The wine list was carefully selected and paired well with the menu choices. I ordered linguine with pork. I tend to order lots of pork when not in Qatar! The desert was a kind of cake covered in chocolate. Given my lack of enthusiasm for chocolate, I should have ordered something else. Overall, I loved the food and the experience and only wish I had been there longer to have a chance to taste more of the menu.

Nun Assisi Relais & Spa Museum is located in Assisi just inside the historic gates of Assisi. Look for the white church across from the parking lot next to the bus stop. The exterior is plain white stone, so it blends in, and the sign is not obvious. The entrance is actually through the garden as I discovered after I entered through the spa. The hotel does offer parking, but I am not sure of the price as I parked in the public parking lot, which was not expensive for the 24 hours I was there.