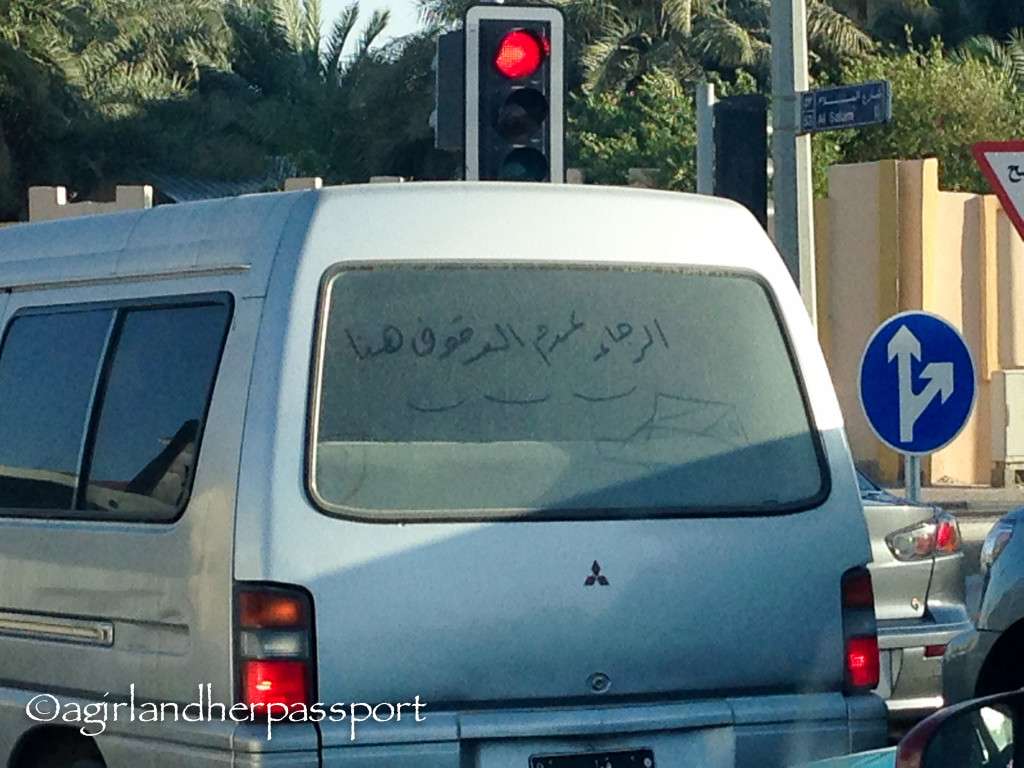 Lost in translation is much more than not understanding the language of the country you are in . It can be a gesture, a look, or a word.  Here in Qatar, this is especially true. Qatar’s population is over 2.3 million and only 250,000 of those are Qatari. Most of the population are expats coming to work here. Given how many nationalities there are,  it’s no wonder we have so many “lost in translation” moments.

Driving seems to be the biggest lost in translation moment! We all have come from different countries with different driving rules and we are now all trying to drive together in a country with rapidly changing infrastructure and different driving rules. Roundabouts cause the biggest confusion, especially for this American. Here you are supposed to wait until it’s clear to enter the roundabout, but in some countries, the people are supposed to let your merge. In the U.S., we don’t have many, so when I first arrived it was like “what do I do and how do I not get killed doing it!”  This was the only thing that terrified me about driving here. Now I go through them with ease.

Another lost in translation moment that most women can relate to here is staring. People stare at you here. Yes, it is mostly men, but I once had an Arab woman stare at me in the bathroom while I brushed my hair. Local men stare as they aren’t used to seeing women with their hair uncovered. The laborer expats stare as they live with men and work with men all day and I can only guess that looking at a woman is a nice change. The other men stare, at least at me, because I am blond and their just aren’t a lot of us running around in the Middle East! (Yes, I am making some assumptions here, but I am sure I am right to some degree.) When I first arrived, it bothered me a lot. It made me angry. It is not something I was warned about before I arrived. But then I realized, I stared at people when I arrived and they are just looking out of curiosity. Now I hardly notice.

The way to greet people in Qatar is sometimes lost in translation to expats. People in the Middle East don’t just say hello and start talking. They greet you with Good Morning and how are you? They may also ask after your family or your health.  This can take some time to get used to. Even in shops its appropriate to say Good Morning before checking out. It took some practice, but now I am used to it and greet everyone with a Good Morning! By the way, this is even said if you had a car accident on the way into work!

Speaking English with other expats can be lost in translation. We native English speaking people of the world can barely speak to each other some times. Or if we do understand the word, we have a different meaning. This was revealed to me recently when I met a Scottish guy. We were out at the mangroves and we had to wade through water and the legs of my pants got wet. Well pants in the UK, apparently means your underwear! Of course, he didn’t say anything at the moment, as I am sure he couldn’t figure out why this girl was talking so freely about her underwear! He did tell me later that they say trousers. There are so many other English language differences, petrol station/gas station, napkin/serviette, bathers/swimsuit, etc. Of course, the pants/underwear is the most confusing and funny! Although now, I catch myself saying things like shop instead of store and petrol station instead of gas! My English has become international English!

This post is part of a travel link up hosted by Emma, Kelly, Rebecca and Sam . Head on over to any of these blogs to read about their lost in translation moments!

Why I Got Global Entry

Travel Rules I Break and Why!