Since I had a short time to sightsee in Brussels, I decided to use TripAdvisor for suggestions for things to see.  I have to admit, I never thought I would be going to Brussels.  It has never been on my travel to list.  I had no idea what to do and as I mentioned in my previous post, people said it was boring!  TripAdvisor had a list of things to do if you had three days in Brussels.  I didn’t have that many and the first couple of things I looked into didn’t fit with the conference schedule.

The buzz on TripAdvisor was about this amazing museum that you just had to see. This was the Horta Museum.  I knew nothing about Horta or why there was a museum, but after reading the reviews and looking at the website, I knew I had to go.  The only day I could go was Sunday after the conference because they are not open on Mondays and open at 2pm and close at 5:30!  I was warned to go early as there is a line and they only let so many people in at a time.  If you don’t make it in by 5:30 then you are out of luck.  Never heard of a museum with such short hours that could afford to stay open.  I managed to get there around 1:40 and yes there were already three people waiting!  As i waited the line got longer.

I don’t even have the words to describe the museum, but it was beyond amazing.  Plus it is actually a house.  It is the house built by Victor Horta, as his house and studio.  I knew nothing about him and didn’t know what the museum contained.  This was one of the best ways to experience a house museum.  You have no expectations as to the contents.  The house was built during the height of Art Nouveau.  Every last detail of the house reflected this down to the radiator in the front hall and the details are exquisite.  You aren’t allowed to take pictures inside the house and I am not sure it would do it justice online.  I was so intrigued about the house, I plan on learning about the actual construction and interior design in more detail.  I need to know how you build a house with a stain glass roof!  Here are two pictures I took of the outside and you can see the line. 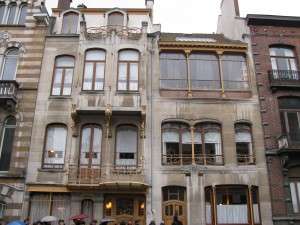 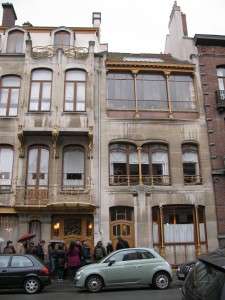 The people of Brussels was one of the other great things I experience.  Everyone was very friendly and the minute I spoke English they smiled and spoke excellent English.  I did try to greet them and thank them in French though.  One person even saw me looking at a map and spent several minutes giving me detailed directions to the Horta Museum after I had gotten off the tram.  I guess I look pretty friendly as well, because several people asked me for directions and some spoke to me in French.  That baffled me because I feel like I look very American and that I looked out-of-place.  One restaurant even brought me an English menu once they realized I could barely read the French one.  The people of Brussels made the trip less stressful and I was able to enjoy my time.  Thank you Brussels.

I had promised to talk about my hotel, but considering all the positives I just mentioned, I won’t talk about the negatives.  Let’s just say if you want the story, email me.  I can tell you where not to stay!