Stepping Back into the Past at the Egyptian Museum 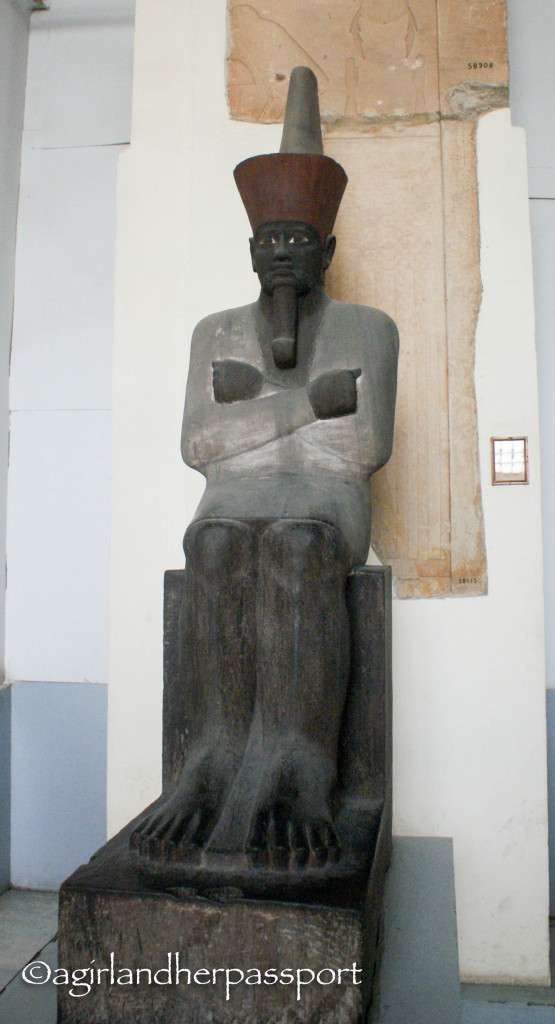 Walking into the Egyptian Museum feels like you have stepped back into the past. The museum was the first purpose built museum in the world. It doesn’t look like much has changed since it was built in 1902. Being a former museum person, I was in awe of all the artifacts on display. You could never see it all in one day. 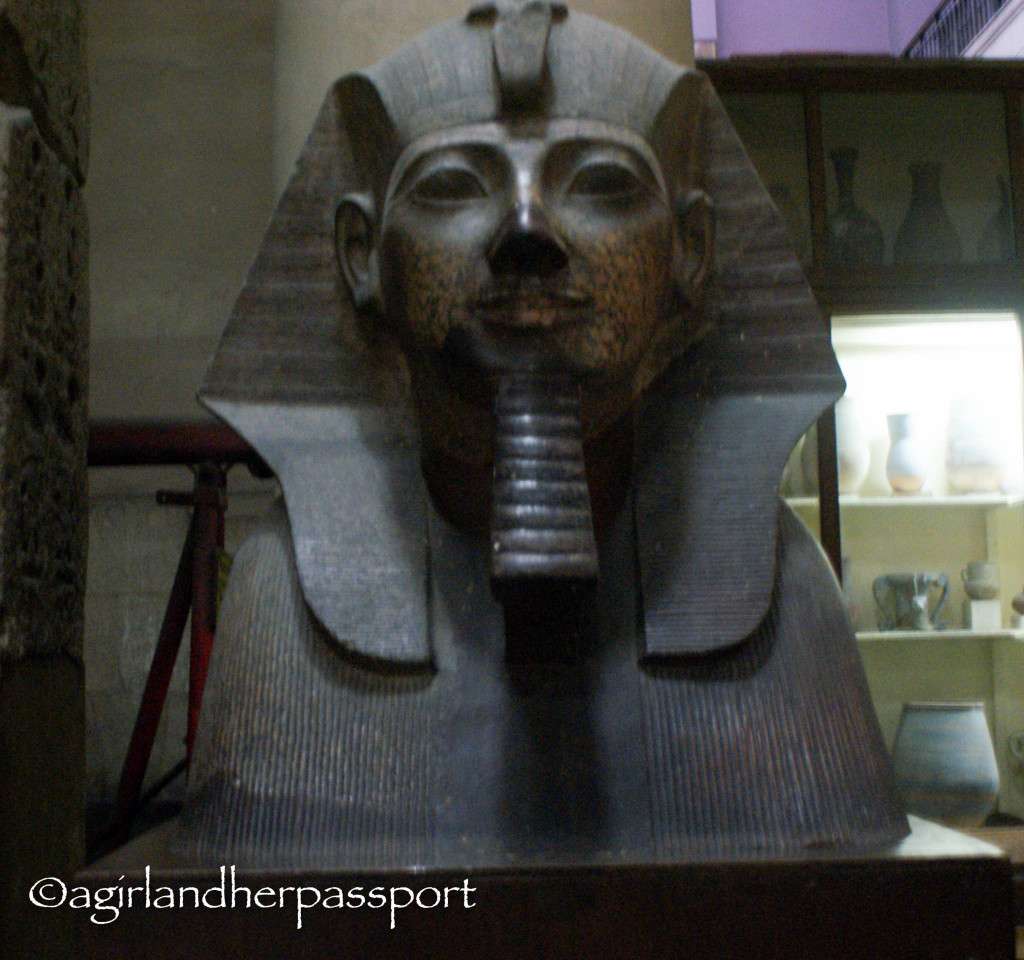 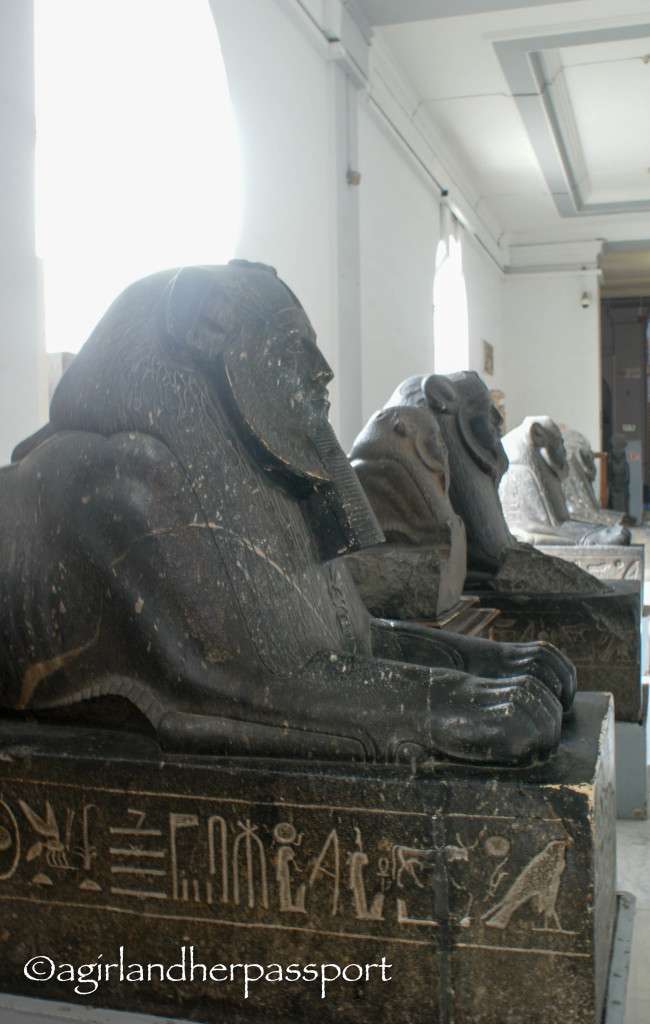 The first floor is laid out in chronological order. The scale of the artifacts on this floor is what struck me the most. Most of the artifacts were large stone pieces. Many of these were heavily inscribed with hieroglyphics.  The statues and sphinxes were mostly made of granite and must of weighed tons. Other pieces were also stone and consisted of pieces of buildings and stelas. This stone sculpture is of King Khafre, who is the builder of the second pyramid at Giza. There is also several sculptures of King Hatshepsut, a female king, shown below! 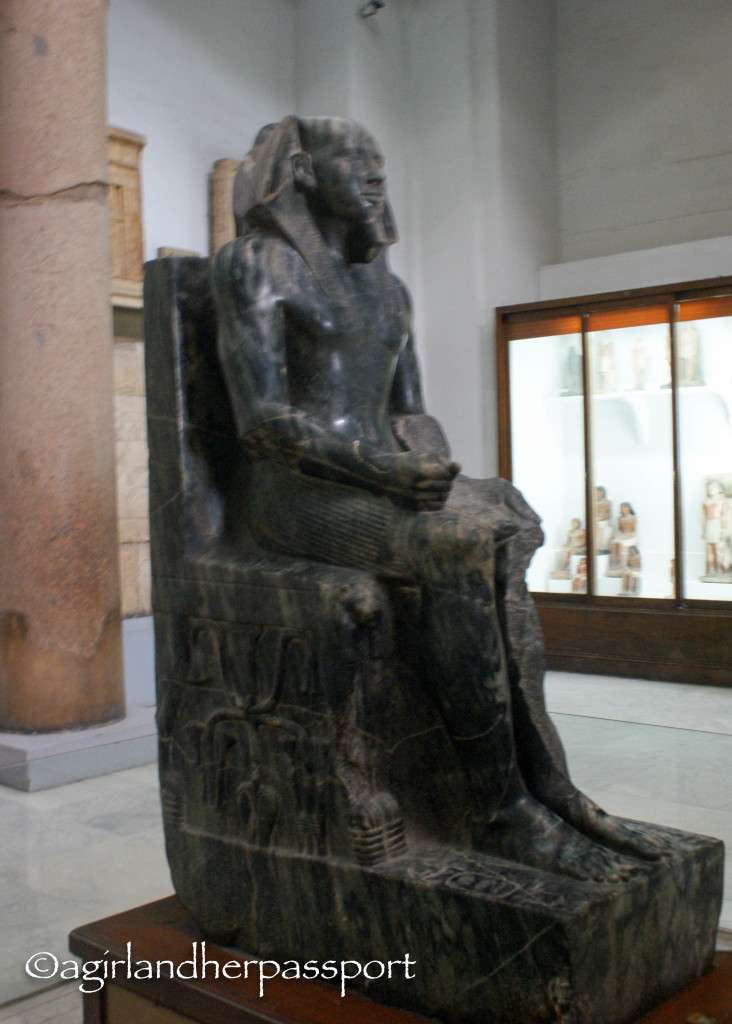 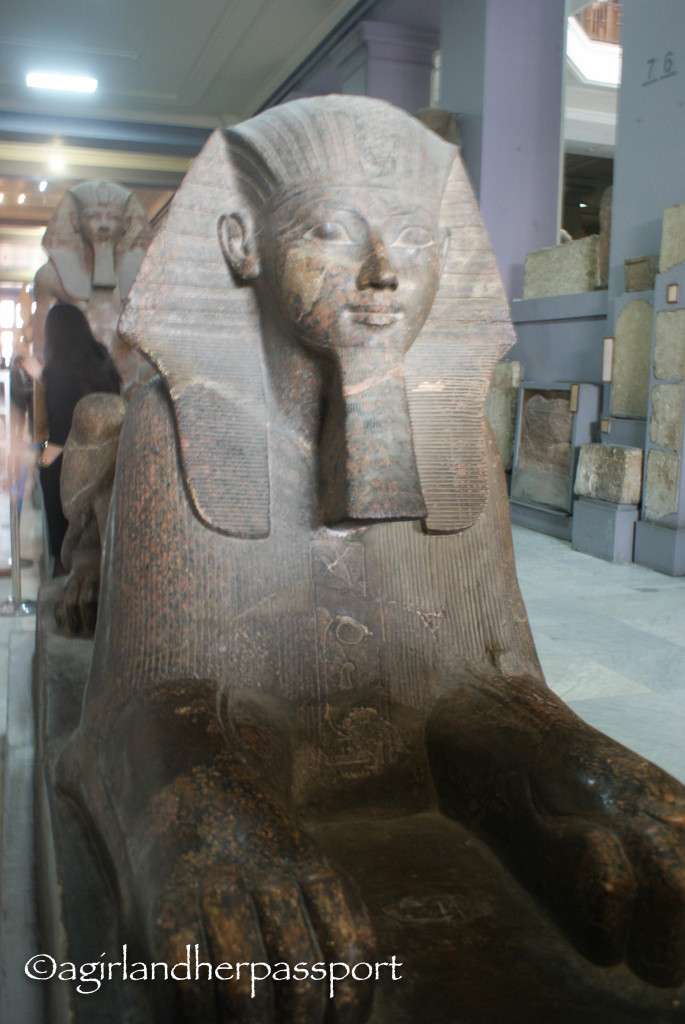 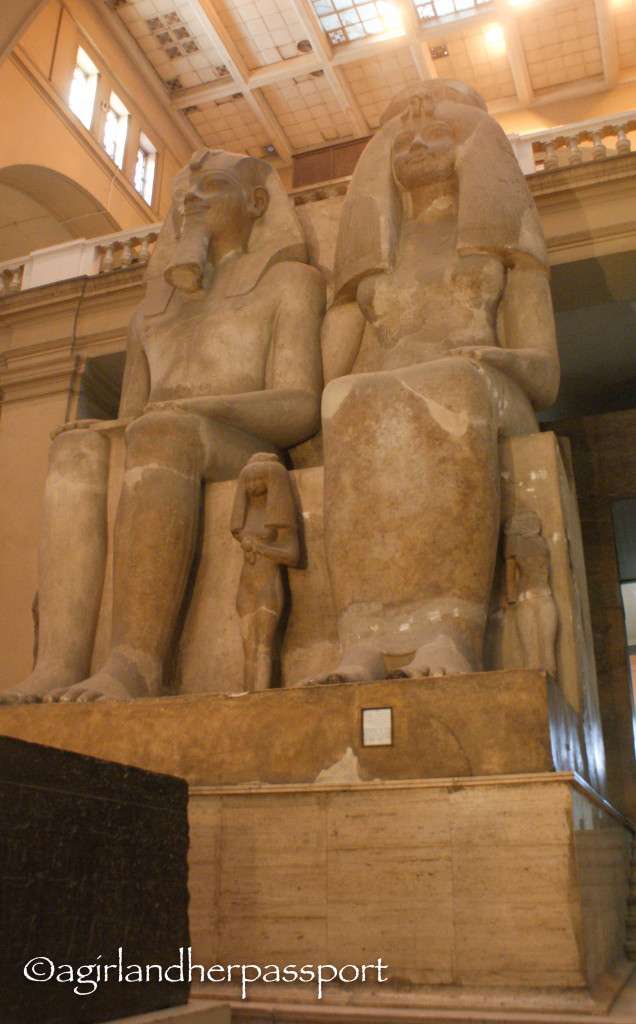 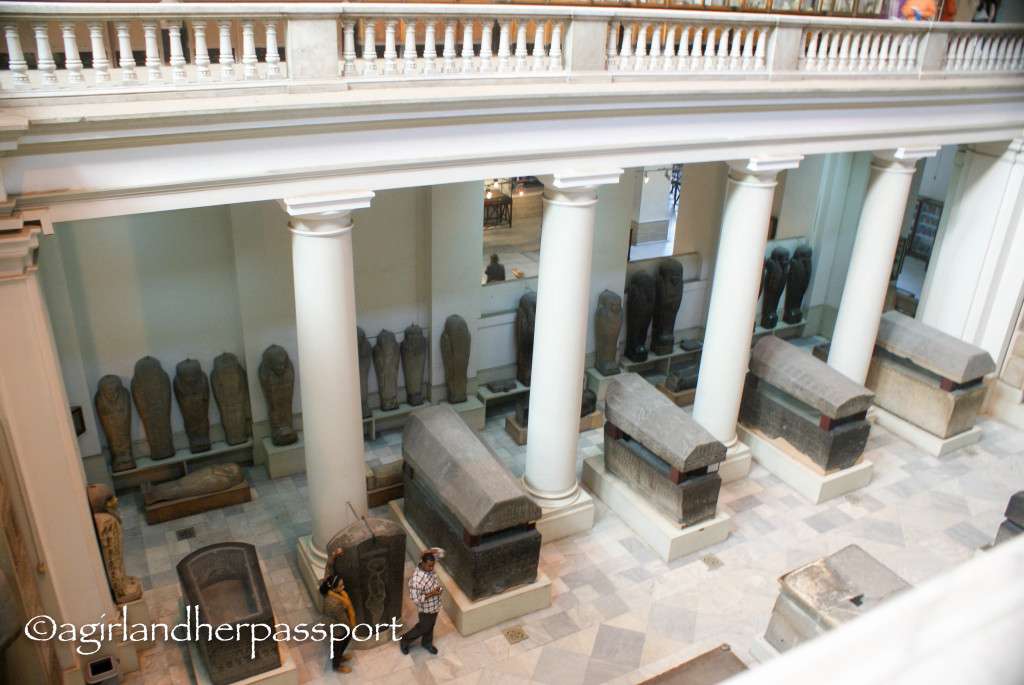 Treasures abound on the second floor. King Tutankhamun’s tomb items are displayed here including the famous mask. Unfortunately, photographs are not allowed in the area where the mask is kept. This room was also slightly more modern than the rest of the museum, and it displayed much of the smaller pieces found in his tomb. The large golden shrines are outside that encased his sarcophagus are outside the room and go from large to small. The canopic jars that stored his organs are also on display next to the mask room. 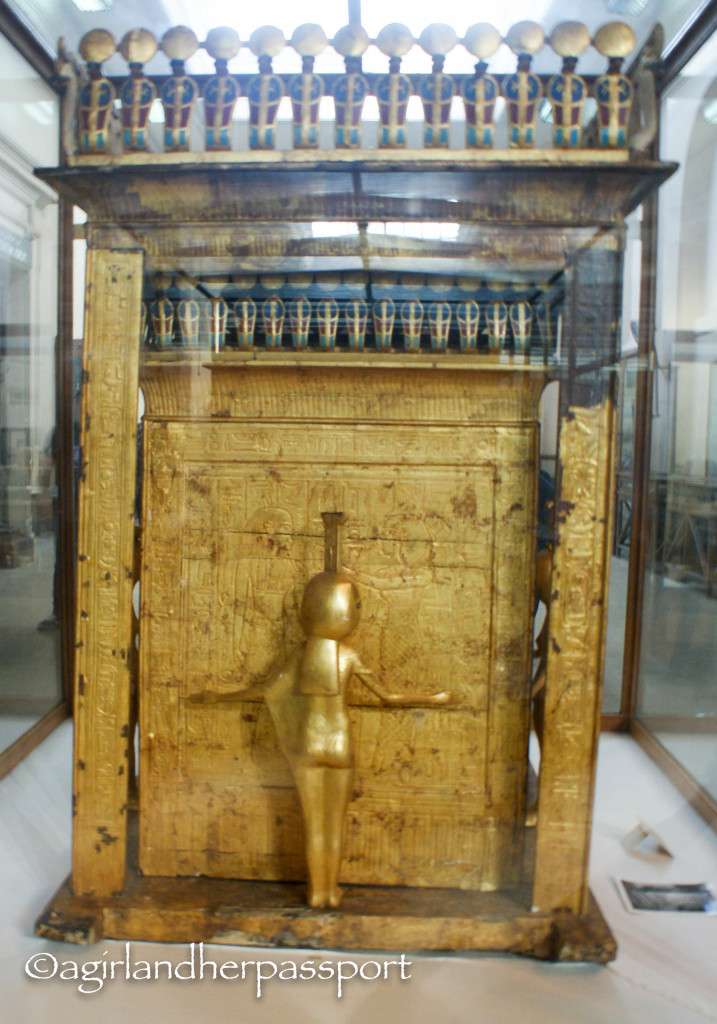 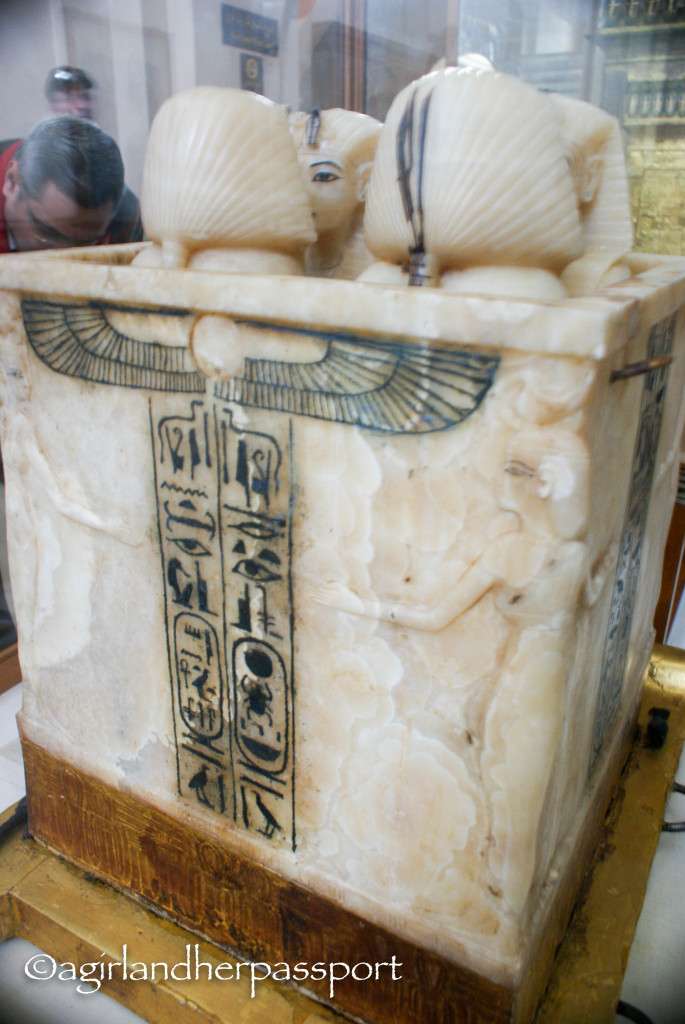 The second floor also houses the Royal Mummy rooms. They are split into two rooms that are across the museum from each other. Not everyone on my tour opted to do the mummy room as it was an extra charge. However, it was worth it to me. I am fascinated by the mummification process and how it preserves the bodies so well. It was also interesting to read the descriptions of the person’s health, which they have gleaned from x-rays and MRIs. Some of them had hair, and one had a very impressive set of white teeth! There is also a room of animal mummy’s that I did not visit. The other people on my tour said they mummified every kind of animal. This room was included in the price of the regular admission ticket. To help preserve the mummies, there is no photography allowed in the rooms. 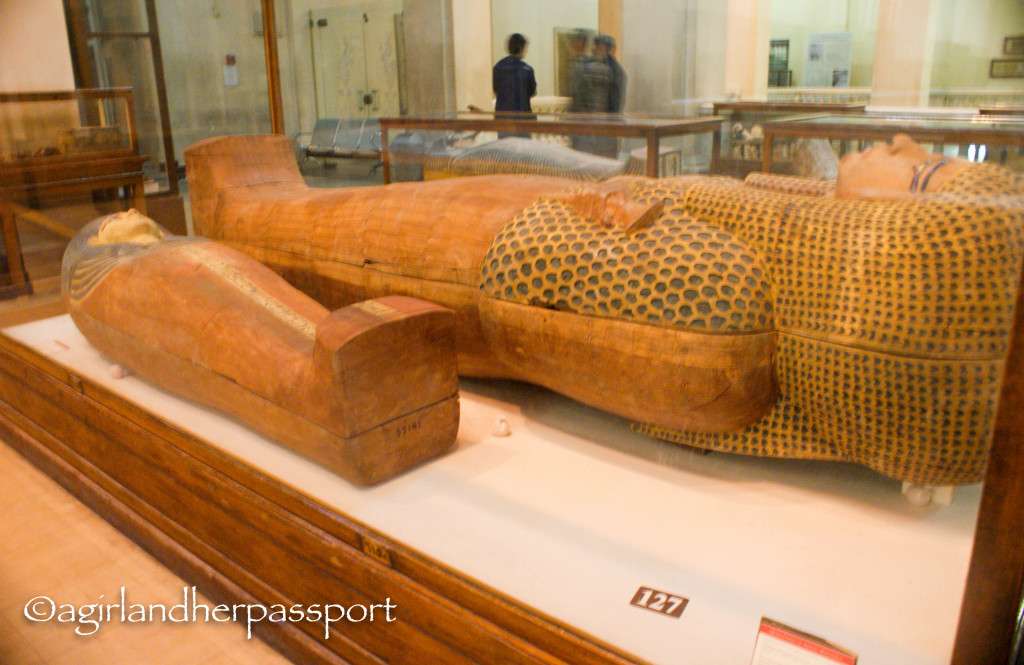 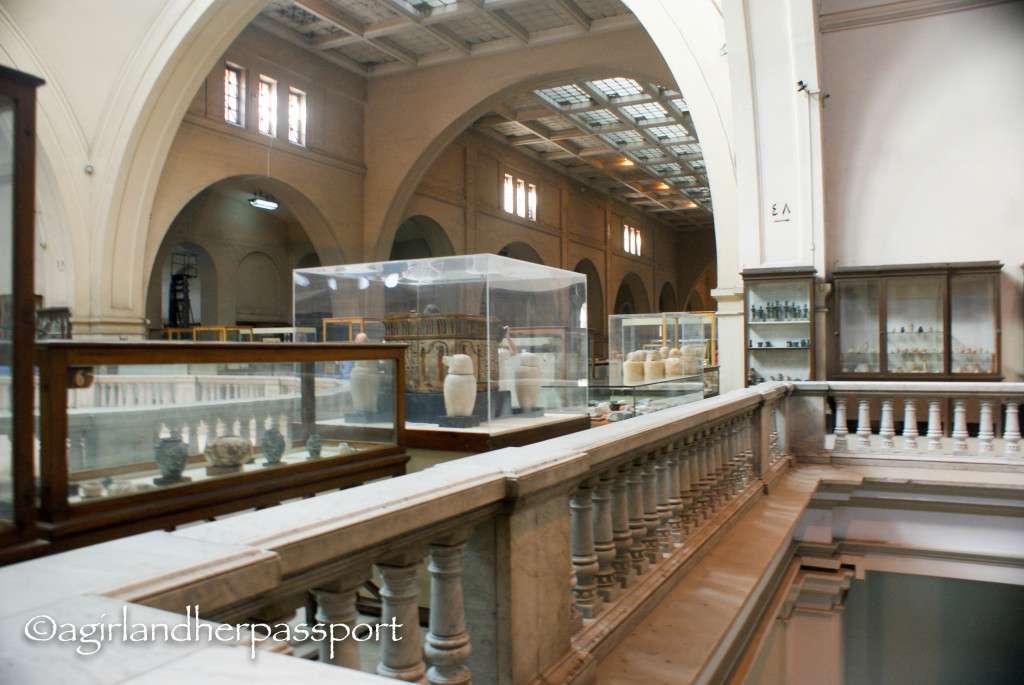 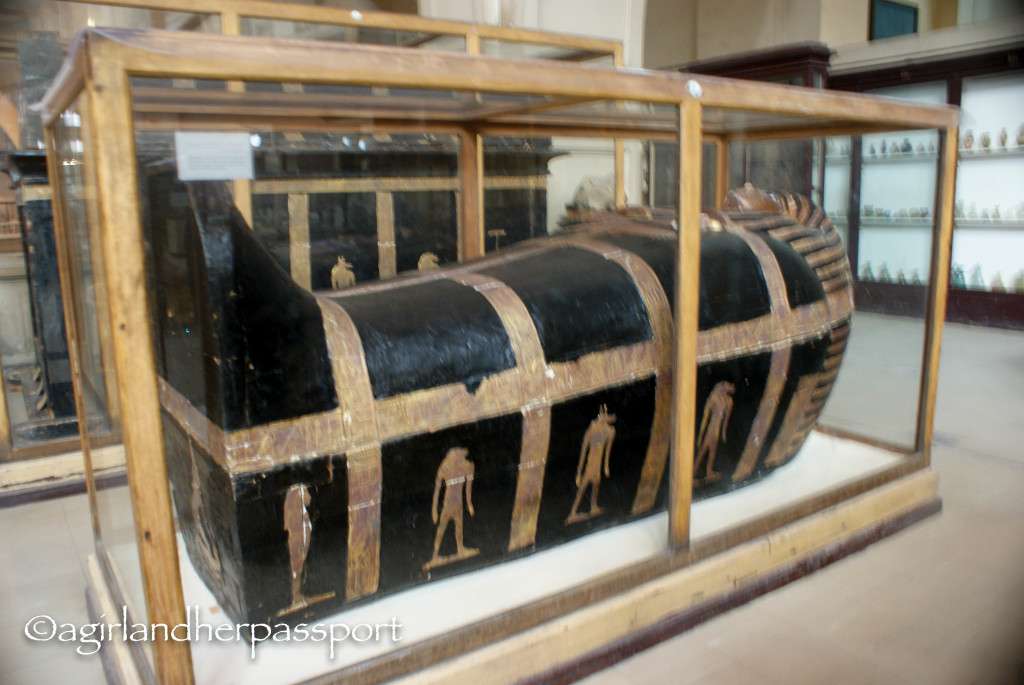 The rest of the second floor contained many more sarcophagi and hundreds of cases of smaller objects. Not only was the collection large, but it was deep. It seemed everything in the museum’s collection was on display. Each case held several pieces and in some cases, there was much more. The items ranged from scarab beetle pendants to shoes to small statues to wigs! Some were simple, and some pieces were very elaborate. There were rooms I didn’t even go into because I didn’t have the time and not even sure what was in them. 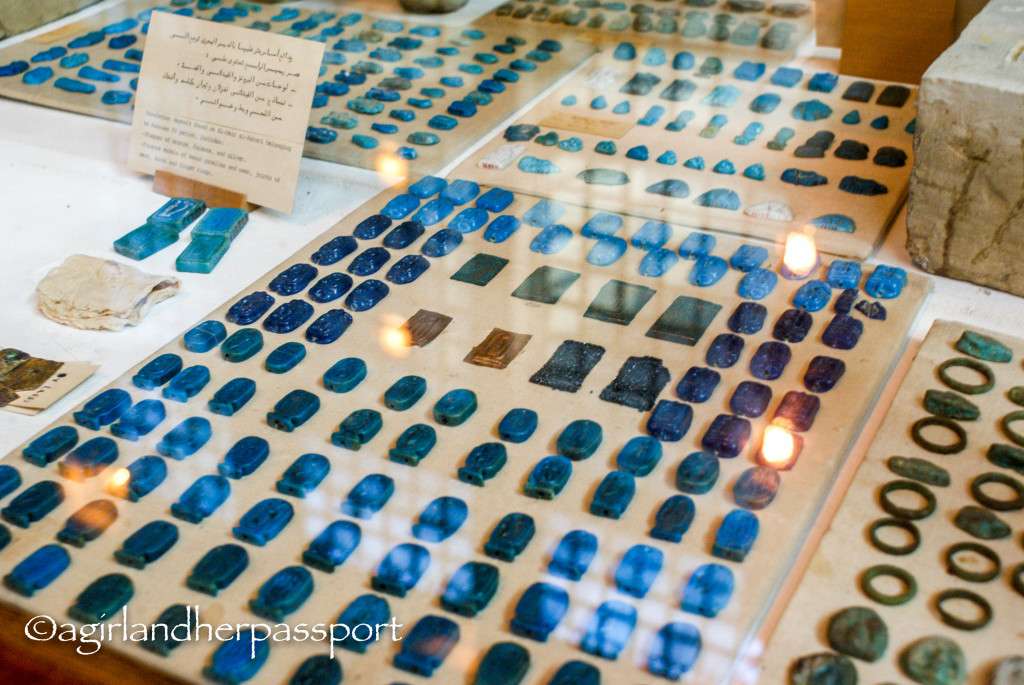 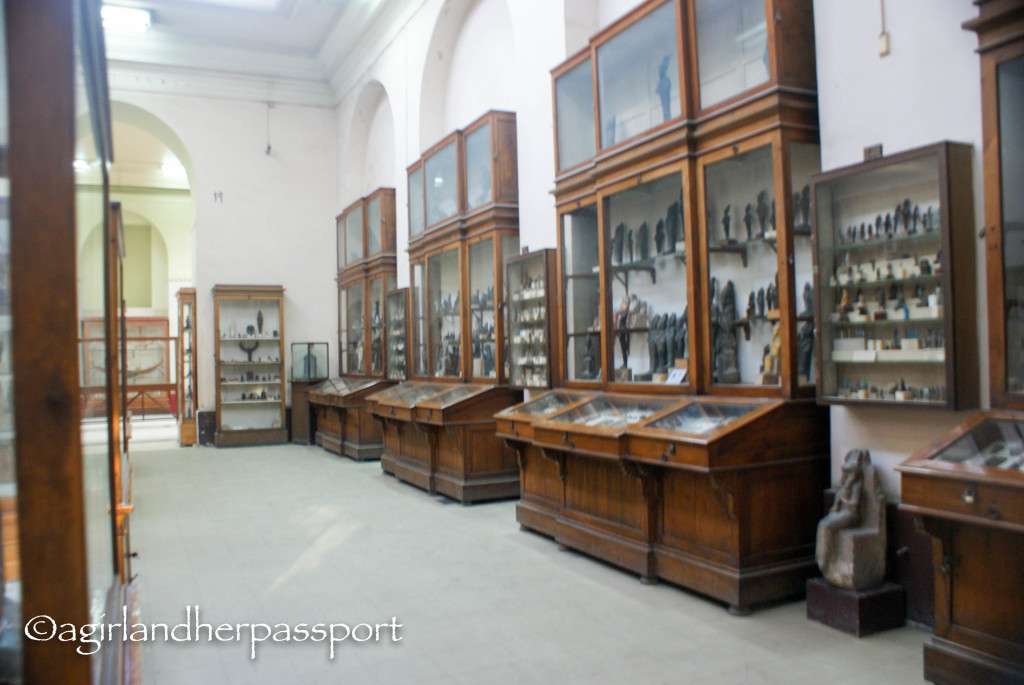 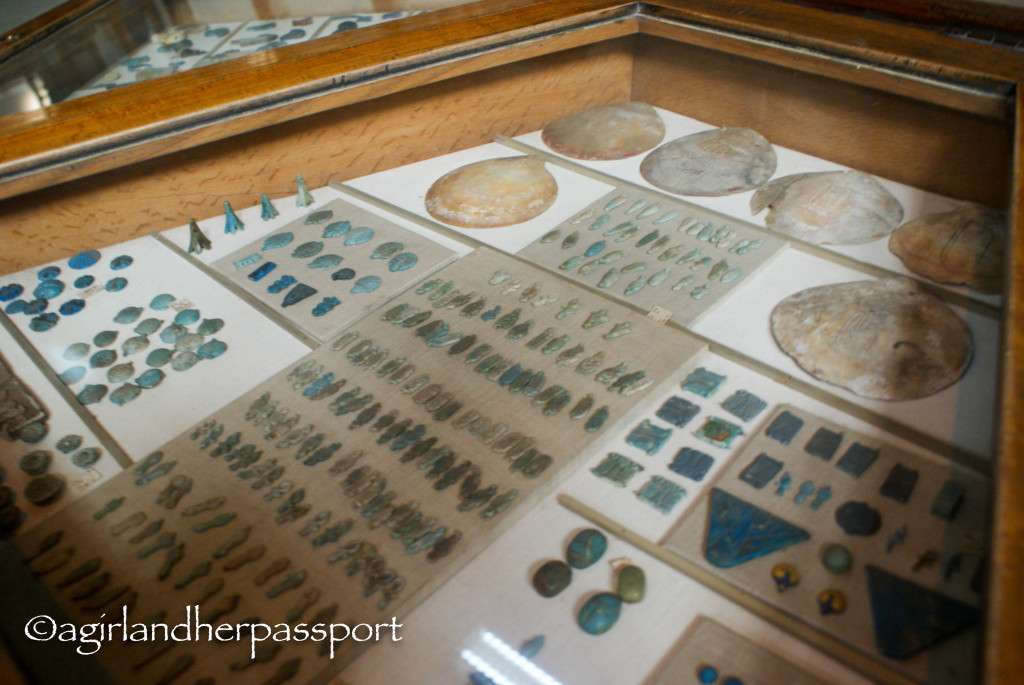 Every time I see things from ancient civilizations, I am always in wonder of the skills and tools they used to make them. Also, the patience! Never in today’s world would we have the patience to build on person’s tomb for 20-30 years!

Getting there and tickets: My advice is to take a Uber or a Careem there as taxis may want to negotiate the rate and not turn on the meter. You are assured a fair rate if you use Uber or Careem. There will be a line to get through security right when you get there. If you want to take pictures inside, go to the ticket booth to the right of the security entrance. The cost is 50 Egyptian Pounds. This is a new procedure as of January 2016, as before photographs were not allowed. If you are buying an entrance ticket, you can do it there as well. Ours had been purchased in advance. I believe the price is 60 Egyptian Pounds. The cost of the Royal Mummy room was 100 Egyptian Pounds, and you buy the ticket at the door. You will go through security one more time before entering the building, and they will ask for your photography ticket if you have a camera. You will also have your bag inspected when you leave. I would recommend paying for all the extras as it was great to see the mummies and to take photos.

Have you been to the Egyptian Museum? What was your favorite part? 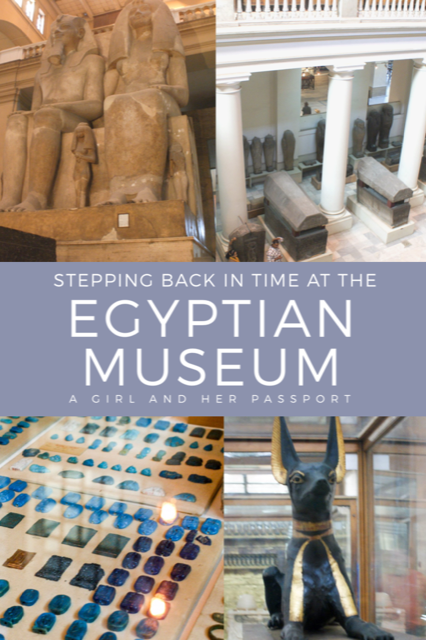 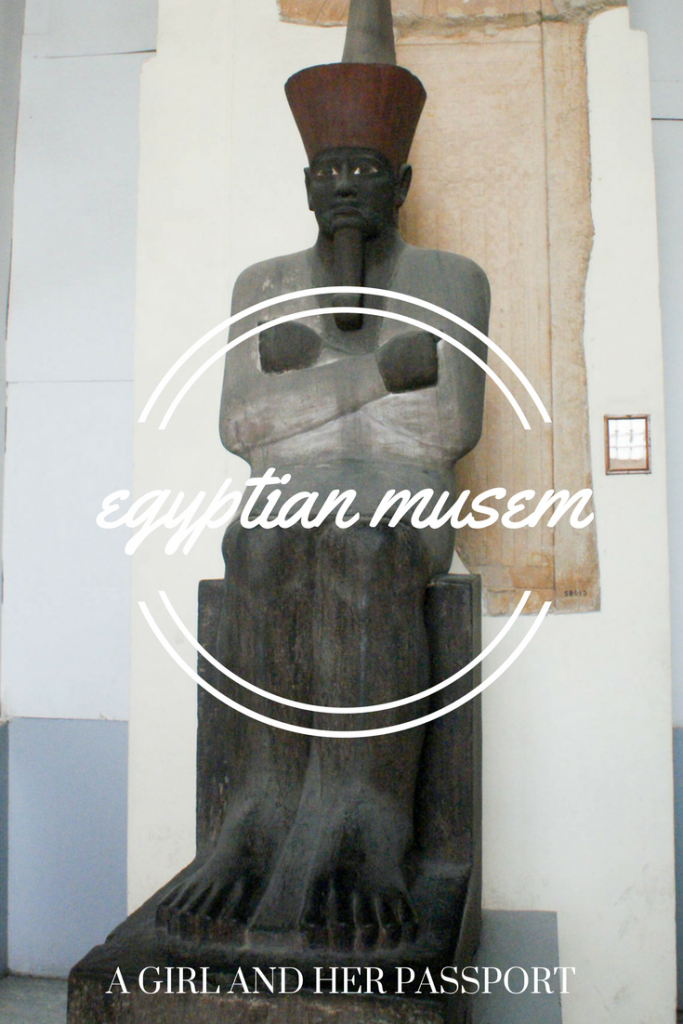 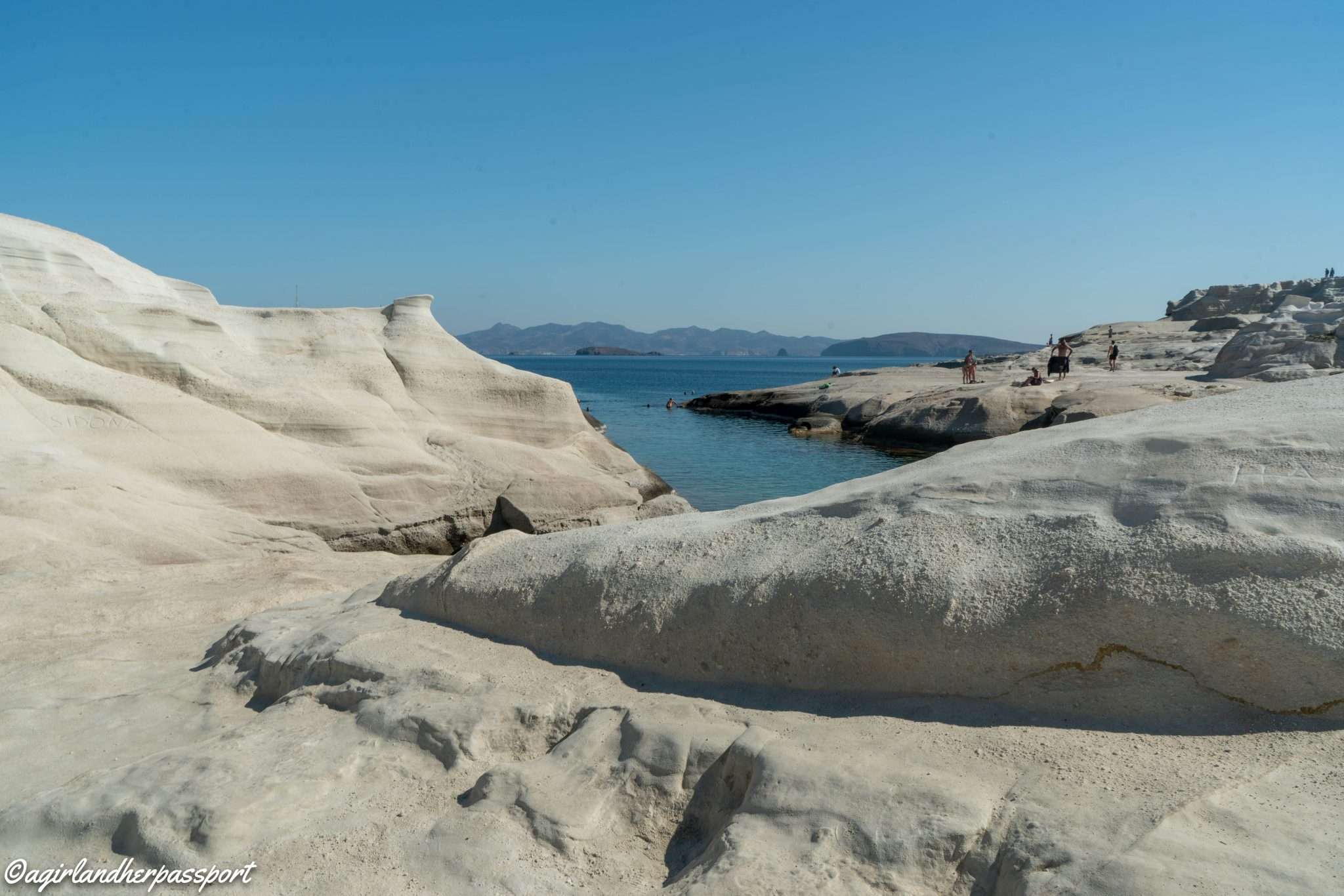 Best Things to do in Milos

The Year of Traveling Fearlessly: Staying Safe While Traveling Solo