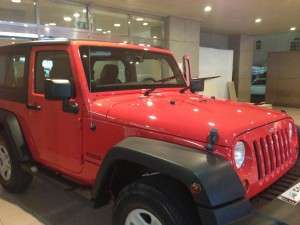 I knew right away when I arrived that I would need to buy a car.  This place is more into driving than Texas is.  And the driving is crazy, so I knew I needed a big car and that I would want to go off-roading.  After looking around, I finally decided that I would get a Jeep.  That is when the adventure began! Unlike in the US, where you could walk into a car dealership and walk out later that day with a car, the process here takes time.

First, I went to the Jeep dealership and looked at the Jeep Wrangler. I asked about price, warranty, upgrades, etc.  The first thing that surprised me was they just had one car out of each model they sell.  I never actually saw the car I was buying until I picked it up after it had been paid for!  I left and thought about it and decided I want to go for a test drive.  I called and made an appointment to test drive the car.  Again, you can’t just walk in and test drive a car here.  I didn’t even test drive the model car I was buying!  I test drove the Wrangler Rubicon not the Sport.  After the test drive I told the salesman, I wanted to purchase the car.  He looked on his list to see if they had the color and model I wanted.  I was in luck and they had one left.  I still didn’t leave with a car that day.

He made arrangements with the bank to come to the dealership, so I could apply for the loan.  First, I had to get a letter from my company stating my salary and that I was allowed to buy a car!  This is in part because there is no credit rating system here and because I am here under a sponsorship.  I met the banker at the car dealership.  All I did was fill out an application.  He didn’t bring a computer or anything.  I would have gone straight to the bank if I had known.  The bank approval took two days.  Then I had to go get a check book print.  That was the easiest part though!  They have a ATM like machine that prints the check books.  I took the check to the car dealership and they said they had to wait for the check to clear.  It cleared in one day, but I couldn’t go the next day.  I went the day after and finally picked up the Jeep!  I have named it the Lobster!  The Lobster and I have done several off-roading trips and been to the beach.  Here is a video of one off-roading trip from awhile back. Look for the Lobster. http://youtu.be/FQ9iq5JzwuM

A Trip to the Sinkhole and Singing Sand Dunes

Staycation at the W Doha