I thought I had done most everything in Qatar there was to do, but I was wrong.  A few weeks ago, a friend of mine posted pictures on Facebook of baby sea turtles making their way into the ocean right here in Qatar. I had no idea that they laid eggs here.  So another friend of mine and I decided this was something we had to do.  We went up on a Saturday, as this is the less crowded day at Fuwairit Beach.  We figured someone would see them hatching and scream or something and we would all run over to watch.  We didn’t see a thing.  Leaving disappointed, my friend checked his Facebook  and discovered we had been in the wrong spot!  Apparently, this is a conservation effort and the eggs are moved to protected fenced in area once they are laid.  Every night biologist come a check the nests. We decided it was worth going out the next night to try again.  We were not disappointed.  The turtles had hatched.  These are hawksbill sea turtles, which are endangered.  They are prized for their shells which people have used to make tortoise-shell accessories.  The pictures aren’t great because it was dark and you aren’t allowed to use flash because it confuses the turtles.  The man standing in the water during the video is holding up the light so the turtles will think it is the moon and go to ocean.  It was an amazing experience to watch 79 baby hawksbill sea turtles make their way into the world. 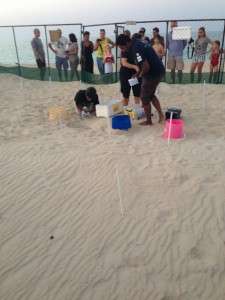 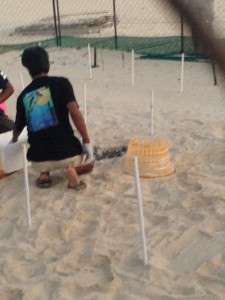 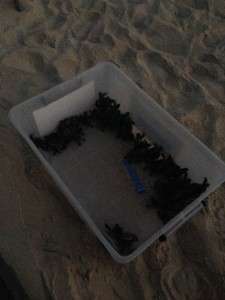 The Cats of Istanbul