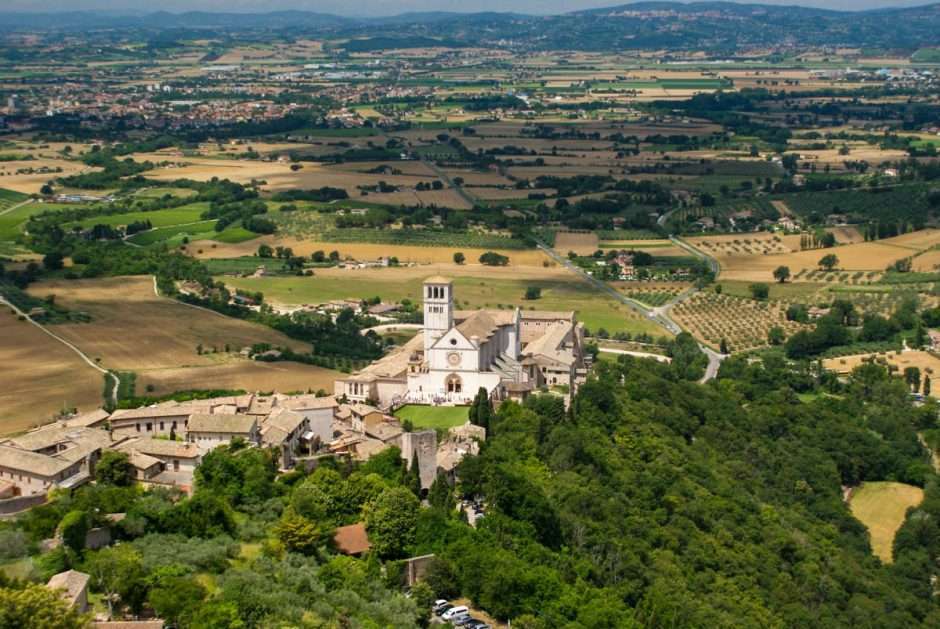 Dotting the hills of Italy, medieval towns are to be found all over the countryside. Each one unique with a story to tell. Given their locations, I often think about the logistics of getting stones to build these towns up these steep hills and how many hours it took. Every town is beautiful in its own way, and I have been lucky enough to have visited several of these small magical towns in Italy. Here are three of my favorites in Umbria.

Amelia has been a favorite of mine since last year when my friends took me there. Located about an hour and a half drive north of Rome. Amelia is claimed to be the oldest Umbrian town, and some say was founded around 1134 BC. Despite the age dispute, the minute you see Amelia you know it’s old. The walls are almost 11 and a half feet thick and surround the old town. You can enter the historic center through the Porta Romana walking or by car. Careful driving in as it is a one-way road and the streets are so narrow that people flatten themselves to walls as cars pass by.

Walk through the Porta Romana, and you can explore all of the historic center on foot. Look out for the old Roman road that has been uncovered in parts of the town. There is an archaeology museum that houses a large bronze statue of Germanicus that was found in 1963. A tour of the Roman baths is also possible; however the tour is given in Italian, but you can get English descriptions of what you are viewing.

Amelia is also home to one of my favorite restaurants to eat at in all of Italy, La Locanda del Conte Nitto. There are signs all over the town so that you won’t miss it. However, it is down a dark alley, but don’t let that discourage you. The food is fresh and local. My favorite thing here was the pistachio tiramisu! Not only that but you get to see more of the old Roman city that has been uncovered in the restaurant and has been glassed over for viewing.

While many flock to Assisi for St. Francis, walking the streets of Assisi to view the architecture of this medieval town was the draw for me. The walk from my hotel to the Basicilia should have only taken me about 15 minutes, but I think it took me an hour because I kept stopping to look at buildings.

Sitting above Assisi is the Rocca Maggiore castle. This fortification was built in 1174 and reduced to ruins in 1198 by the local populace. Starting in 1367 restoration was started and continued by several people over a hundred years. Seeing a castle of this size and being able to walk through it is a rare treat, but it isn’t up to standard when it comes to safety so walk slowly and use the hand rails when they are there. The ticket agent told me this as well when I entered. The best thing is to walk inside the walls to the turret and climb to the top of the tower. From here you can see all of Assisi, the surrounding valley, and the mountains. Even this deathly afraid of heights girl did it!

You can even sleep in a medieval church in Assisi, read my review of the Nun Assisi Relais & Spa Museum here.

I heard of Gubbio through an American blogger who lives in Florence as it is popular with Italian tourists. The town is built into the side of a hill. This makes not only for impressive architecture it also lends itself to the towns ingenious solution of getting from one level of the city to another without having to walk in a zig-zag pattern up the hills, an elevator! Each level of the town had elevator access to another level. Not only did this save me from exhaustion and tired legs, but I was also able to see much of the town in one day.

The highlight for me is the Palazzo dei Consoli, which was built between 1332-1349. It dominates the Gubbio skyline and offers incredible views of the valley below. The Palazzo was the first building in Gubbio to have running water inside. It also houses the Iguvine Tablets, which contain the writings of the Umbrian language. The tablets provide insights into the grammar of the language, now dead.

The Cathedral of Gubbio is one of the prettiest churches I have seen. There is a beautiful circular window that depicts the three symbols of the evangelists, an eagle, an ox and a lion. The church is defined by the 10 pointed arches that support the roof.

Have you been to any of these towns? What town in Umbria is your favorite? Share with us in the comments.